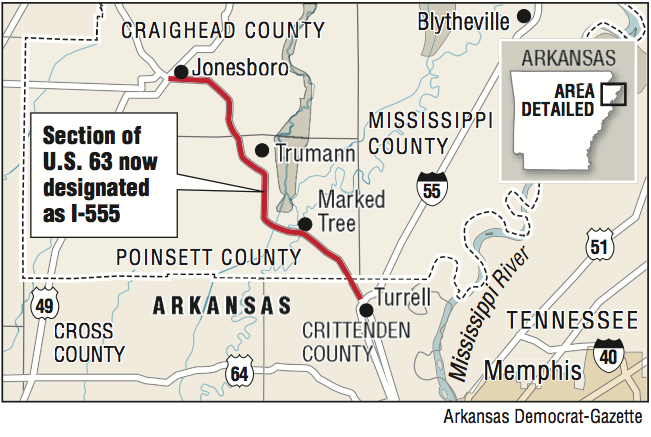 The low bid -- in fact the only bid -- on an Arkansas Department of Transportation project to rebuild a nearly 4.7-mile stretch of Interstate 555 in Jonesboro came in at $38.1 million, according to agency documents.

The bid came from White River Materials Inc. of Batesville.

The project is designed to reconstruct 4.67 miles of I-555 between U.S. 49 and Arkansas 91 on the west side of the Craighead County seat.

The contract will be the third awarded on I-555, which carries up to 37,000 vehicles per day, in recent years.

Work also is ongoing on a $3.1 million project to improve the I-555/U.S. 49 interchange, according to the department.

Koss Construction Inc. of Topeka, Kan., is the contractor on both projects.

Two other companies -- Asphalt Producers LLC of Jonesboro and Delta Asphalt of Arkansas Inc. -- reviewed the latest bid documents but elected not to submit bids.

The bid by White River Materials will undergo the same review that department officials conduct for low bids on all projects before a decision is made on whether a contract will be awarded.

The project was one of only four on which the department opened low bids totaling $44.6 million this week, an unusually small number of projects.

R.L. Persons Construction Inc. of Poplar Bluff, Mo., was the only contractor to submit a bid for the U.S. 62 project. T&T Construction LLC beat out three other bidders on the Arkansas 35 bridge project.