Biden again suggests boosters for everyone

Pledge to follow the science under scrutiny by Compiled Democrat-Gazette Staff From Wire Reports | September 25, 2021 at 5:26 a.m. 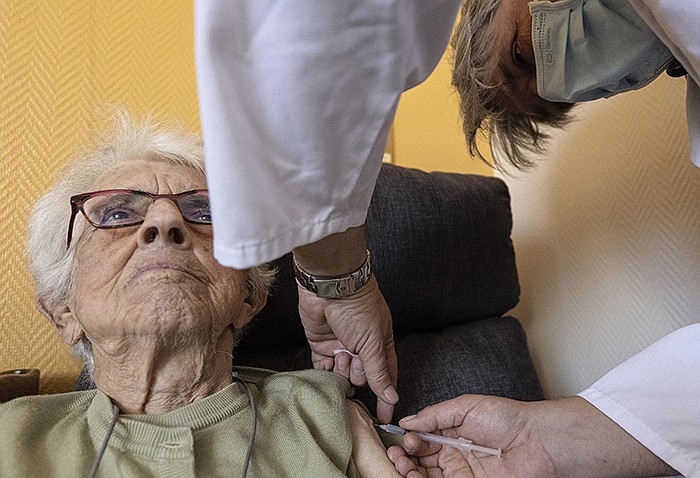 A woman gets a Pfizer booster shot Friday in a nursing home in Strasbourg in eastern France. French health officials are recommending that people with preexisting health problems and those over 65 receive third shots six months after their second doses. (AP/Jean-Francois Badias)

WASHINGTON -- As he announced Friday that booster shots would be available to some Americans, President Joe Biden made a prediction: The administration is likely to soon provide third doses of covid-19 vaccine "across the board" to anyone who wants one.

"In the near term, we're probably going to open this up," he told reporters.

But that assessment -- a politically popular one in a country where most vaccinated people say they are eager for a booster -- was the latest example of how Biden and some of his team have been ahead of the nation's top public health scientists, who have emphatically said in recent days that there is simply not enough evidence to suggest that boosters are necessary for the entire U.S. population.

In fact, two panels of scientists -- one for the Food and Drug Administration and the other for the Centers for Disease Control and Prevention -- voted in recent days against recommending boosters for everyone after fierce public debates streamed online.

The president's remarks Friday were the second time in two months that he had suggested boosters would be available to everyone.

If you're vaccinated, he said, "You're in good shape and we're doing everything we can to keep it that way, which is where the booster comes in."

He urged those now eligible for an extra shot to "go get the booster," saying he'd get his own soon -- and that everyone should be patient and wait their turn.

[Video not showing up above? Click here to watch » arkansasonline.com/925walensky/]

Biden's comments were issued on the same day that Dr. Rochelle Walensky, CDC director and one of the president's political appointees, came under fire for allowing boosters for a broader group of people than her agency's own immunization panel recommended.

Walensky issued a statement late Thursday advising that booster shots could be given to certain adults with the Pfizer-BioNTech vaccine six months after the second of their first two shots.

"We will not boost our way out of this pandemic," however, Walensky warned.

Taken together, the announcements by Biden and Walensky did not sit well with all of the scientists who advise them, raising questions about the president's pledge to always "follow the science" as he fought the pandemic.

"You get much more of a bang out of the shot" by letting the immune system mature that long so it's prepared to rev up production of virus-fighting antibodies, he said.

Exactly who should get a booster was a contentious decision as CDC advisers spent two days poring over the evidence.

In particular, Walensky said that -- in addition to those 65 and older and those 50 to 64 with underlying medical conditions -- people 18 to 64 who have no underlying condition but who work in places with a high chance of covid-19 exposure would be able to get a Pfizer booster if they previously got the Pfizer vaccine.

In an extremely unusual move, Walensky thus overruled her advisers' objections and decided that an additional broad swath of the population also qualifies: people at increased risk of infection -- not serious illness -- because of their jobs or their living conditions. That includes health care workers, teachers and people in jails or homeless shelters.

Jen Peck, 52, of Eau Claire, Wis., qualified because of her job as an education math and science consultant.

[Video not showing up above? Click here to watch » arkansasonline.com/925boosters/]

Peck was vaccinated in March but worries about unknowingly picking up and spreading an infection. She travels between rural schools where many students and teachers don't wear masks and the younger children can't yet be vaccinated.

"I don't want to be covid Mary carrying it around to buildings full of unvaccinated kiddos. I could not live with myself if I carried it from one building to another. That haunts me, the thought of that," said Peck, who got the extra shot first thing Friday morning.

Experts say it was only the second time since 2000 that a CDC director overruled its advisory panel.

Health officials must clear up confusion over who should get a booster, and why. For now, the booster campaign is what Walensky called "a first step."

All of her recommendations pertain only to people who initially got the Pfizer shot. The FDA has not yet considered booster shots for people who received the Moderna or Johnson & Johnson vaccine.

About 182 million Americans are fully vaccinated, or just 55% of the total population. Three-quarters of those 12 and older -- the ages eligible for vaccination -- have had a first dose. About 100 million people in the U.S. have been fully vaccinated with the Pfizer shot.

While some health experts credited the CDC director for charting a course through uncertain waters, others warned that politics had intruded on scientific decisions. Although her statement broadened eligibility for the shots beyond the recommendations of a CDC advisory panel, Biden said Walensky was in line with medical science.

"Everybody uses this statement 'follow the science' very glibly. And I think that the science here did not warrant picking out a group of people and saying that you may be at more risk for acquiring an infection," said Dr. Sarah Long, a member of the CDC's advisory committee, referring to the groups of workers who were made eligible for booster shots.

Long, who is a professor of pediatrics at Drexel University College of Medicine in Philadelphia, said a president telegraphing his opinion before the public health process undermined the expert advisers, calling it a violation of the "checks and balances" built into the system. She also criticized Walensky for expanding the number of people eligible.

If that pattern of reversals were to extend beyond boosters, she said, that "would be the end of the vaccine program as you know it."

But a number of other committee members -- including some who also resisted a broad expansion of the booster program -- defended Walensky's ruling, adding that federal regulators authorized additional shots less than 24 hours before the CDC's advisers were asked to give guidance. That left them little time to hammer out the language of their recommendations, much less to debate the type of issues that were weighing on Walensky, like staffing needs at hospitals or schools.

For the president to be subject to that kind of criticism is exactly where he promised he would never be.

As a candidate, Biden repeatedly denounced President Donald Trump for pressuring scientists at the CDC and the FDA. In March, Biden repeated what officials have said is his North Star on the pandemic during a visit to the CDC's headquarters in Atlanta.

"There's an entire generation coming up that is learning from what you've done," he told the staffers. "I don't just mean learning about how to deal with a virus. Learning about it makes a difference, to tell the truth, to follow the science, and just wherever it takes you, and just be honest about it."

Biden has deferred far more to the public health experts than Trump, who publicly and privately pushed FDA and CDC officials to act more quickly to approve vaccines and actively promoted unproven treatments like hydroxychloroquine. Trump also repeatedly clashed with scientists about wearing masks and decisions about when to reopen schools, churches and other places.

Yet Biden's public embrace of booster shots has rankled many in the public health sector, including those working inside the government, who say it could have the effect of putting undue pressure on scientists to make a recommendation they do not believe is supported by the evidence.

However, "During a time when we have over 2,000 Americans dying per day, we're not in a position to sit on our hands and wait," said Dr. Camille Kotton, clinical director of transplant and immunocompromised host infectious diseases at Massachusetts General Hospital. "We need to act as quickly and thoughtfully as we can."

Still, the CDC's medical advisers largely said Friday that fresh attempts from the White House to get ahead of parts of the booster campaign undercut the sort of clarity that the public desperately needed.

"I hope, despite the pandemic being a public health emergency, that we would have the space and the grace to be able to continue to use our process," said Dr. Grace Lee, the immunization committee's chair and a professor of pediatrics at Stanford University School of Medicine.

Some public health officials and doctors say they fear that Biden -- who has staked his presidency on successfully managing the pandemic -- is pushing for boosters because they are politically popular.

A Reuters/Ipsos national survey conducted Aug. 27-30 found that 76% of Americans who have received at least one shot of a vaccine want a booster. Only 6% do not, the poll found.

In mid-August, the president told the nation that his administration planned to deliver booster shots to everyone starting the week of Sept. 20, pending decisions by the FDA and the CDC.

"Just remember as a simple rule, eight months after your second shot, get a booster shot," he said.

That turned out to be premature. Only Pfizer, one vaccine maker, has won authorization to administer additional doses -- and for just some of its recipients.

Walensky defended her move to expand the eligibility pool, noting that the advisers were sharply divided on the issue.

"Our teachers are facing uncertainty as they walk into the classroom, and I must do what I can to preserve the health across our nation," Walensky said, saying that "we will continue to review new data on effectiveness and experience with the third shot, as it becomes available."

Dr. Steven Joffe, a professor of medical ethics and health policy at the University of Pennsylvania, said that with such a close vote at the CDC's meeting, it was reasonable for Walensky to rule a different way. But he suggested that she could have been influenced by the support she and the administration had already shown for a broader distribution of the booster.

"To what extent did she feel like she was bound to follow that line of decision-making?" he said. "I can't get inside her head and answer that question. The fact that the final decision-makers had already staked out their final positions had put the advisory committees in a very difficult position."

Jason Schwartz, an associate professor of health policy at the Yale School of Public Health, said Walensky's intervention "reflects just how closely and directly engaged the senior political appointees are in shaping this booster program."

He predicted her involvement was "going to color" the expert committee's future work.

Information for this article was contributed by Michael D. Shear and Benjamin Mueller of The New York Times; by Lauran Neergaard, Mike Stobbe, Jonathan Lemire, Zeke Miller and Todd Richmond of The Associated Press; and by Josh Wingrove and Jenny Leonard of Bloomberg News. 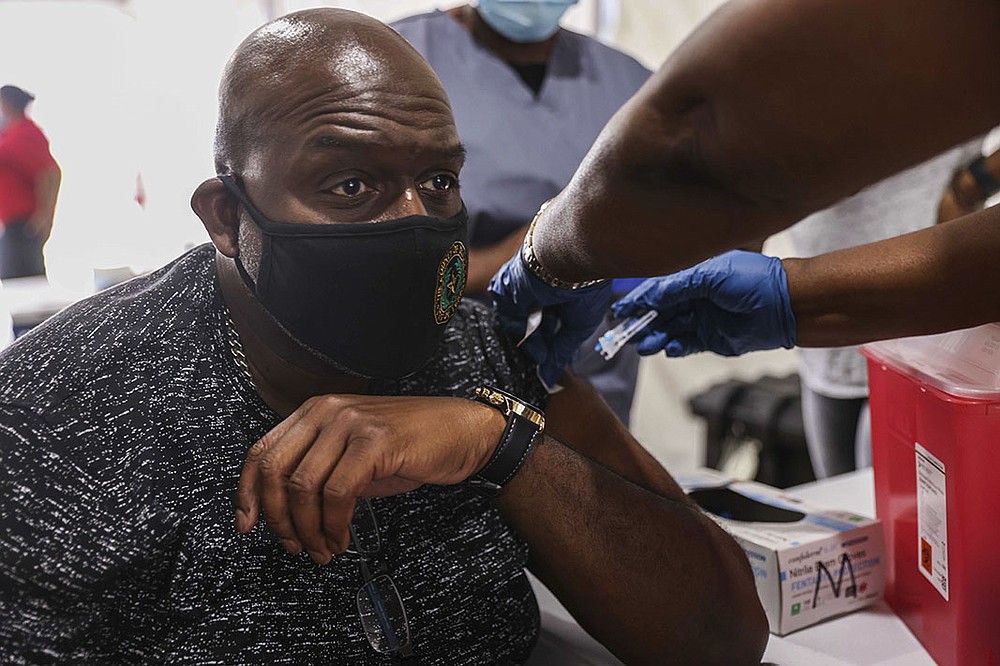 David Penelton, 53, gets a covid-19 booster shot Friday that was offered by Dallas County, Texas, on the opening day of the State Fair of Texas in Dallas. The fair was canceled in 2020 because of the pandemic, making this year’s event all that much more anticipated. (AP/The Dallas Morning News/Lola Gomez)