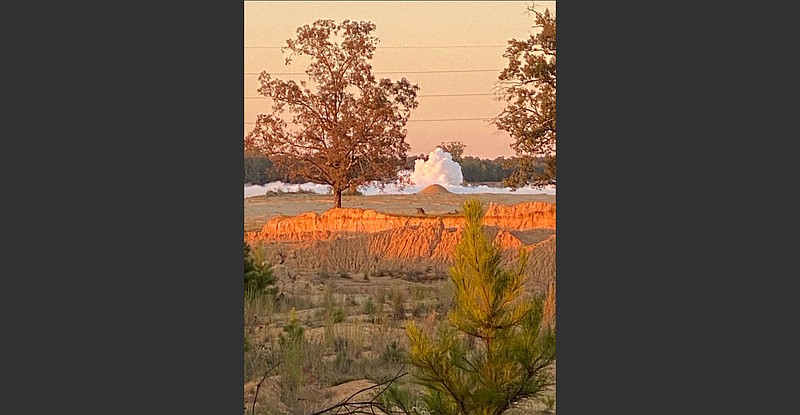 An ammonia pipeline breach in Calhoun County, east of Hampton, sends a plume of the deadly gas into the surrounding countryside. (Special to The Commercial/Calhoun County Sheriff Vernon Morris)

A junior high school football game in Hampton on Thursday evening was allowed to continue while a mile and half away ammonia from a burst pipe drifted away in the opposite direction, according to officials.

About 6 p.m., a large ammonia pipeline running through Calhoun County east of Hampton was struck by heavy equipment exploring for sand and gravel.

Evacuation orders were issued for some residents in the Hampton area, but as of 11:30 a.m. Friday, the all-clear was given to reopen U.S. 167 and allow evacuees to return to their homes, Calhoun and Dallas county officials said.

According to Donna Steelman, director of the Calhoun County Office of Emergency Management, there were no injuries resulting from the release of the toxic gas, which can be lethal in high concentrations.

"My understanding is an employee of Arkansas Gravel Co. was working when he struck a 10-inch main ammonia pipeline that runs all the way through Arkansas from south to north," Steelman said. "Thankfully, no injuries have been reported and up until right now, no requests for medical assistance have been sought from first responders."

Steelman said she was notified of the incident at 6:51 Thursday through a radio broadcast on the Calhoun County sheriff office's frequency, adding that the pipeline was "shut down within an hour of the breach."

"The wind was blowing south by southwest at the time of the accident," she said. "This carried the plume away from Hampton. With the football field being around one and a half miles from the scene of the rupture and the wind carrying the leak in the opposite direction, we allowed the home junior high game to wrap up for better crowd control before shutting down U.S. Highway 167 north and south around 9:30 Thursday night."

Steelman said people in Hampton were evacuated from area.

"Sometime shortly after midnight we evacuated around 150 Hampton residents from their homes in a low-lying area on the southeast side of town where the cloud had begun to settle," she said. "As per the pipeline company's recommendations, we initially evacuated an area a half-mile north and south of the break and three-quarters of a mile east and west. Bradley County opened up their old National Guard armory, and Dallas County opened their Civic Center to shelter evacuees. A church in Camden was also made available for folks wanting to go in that direction."

"Calhoun County is the smallest in the state population-wise so we have only five full-time sheriff's department officers including Sheriff Vernon Morris," she said. "In anticipation of town-wide, door-to-door evacuations, the El Dorado Fire Department, Bradley and Ouachita County sheriff's departments and a couple of canine units turned out to provide extra help in assisting with that task. It's important to recognize the dedication of those officers who in many cases had already worked a full day shift and have since been here all night carrying on their duties for the good of the community. No one we called on for help told us 'no.'"

Steelman said the county had declared an emergency, "which allows us to request and receive necessary assistance from various agencies including the Red Cross."

Officials were on the scene Friday morning "doing air quality assessments to determine when the danger levels have receded to a point where citizens could to their homes," she said, adding that she anticipated that work to finish on Friday.

Asked when she expects life to return to normal in the community, Steelman said, "Maybe by sometime next week."

Morris said the ammonia pipeline was struck by a track hoe excavating material near the pipeline for Arkansas Gravel's wash plant operation.

"Upon notification, I personally called the pipeline's 800 number immediately and spoke with a gentleman in Missouri," Morris said. "He was able to shut down the ammonia pumps right away but it still took some time after that for the pressure in the system to fully evacuate."

From the nearest pipeline shutoff valve, there were 7 miles of 10-inch pipe full of ammonia that had to empty out before the discharge could begin to dissipate, Morris said. Ammonia is lighter than air and normally rises in the atmosphere. Under the cool, humid conditions present at the time, however, the plume lingered near the ground in low-lying areas far longer than what it would have in warmer weather, the sheriff said.

Morris added that, in addition to the 150 Hampton residents evacuated "we also removed people from another 30 homes in the area near the discharge."

The sheriff of nearby Dallas County, Stan McGahee, said he was pleased with how area officials handled the emergency.

"Every county has emergency plans already in place to deal with this exact situation with varying contingents for all kinds of scenarios," McGahee said. "Fortunately, those plans came together as intended and our Calhoun County sheriff's department counterparts did their job to keep the citizens of that community safe from imminent harm."

McGahee said Dallas County officials housed around 75 Calhoun County residents in the Fordyce Civic Center "while all our motels also filled up with evacuees."