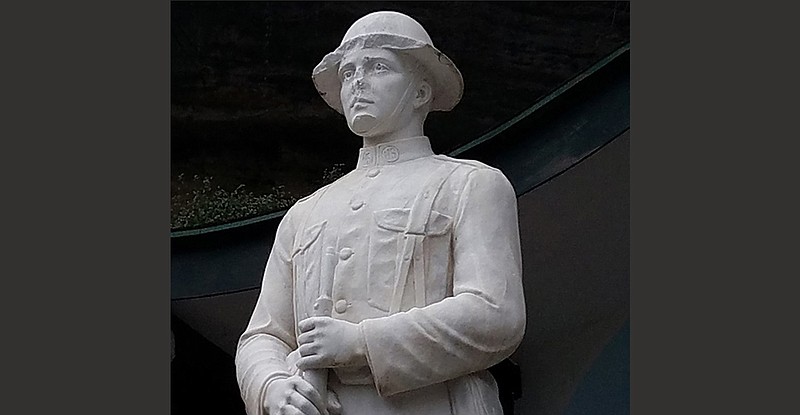 A doughboy statue that has been in Eureka Springs’ Basin Spring Park for almost a century was damaged by a vandal. (Special to the Democrat-Gazette)

Someone smashed the face of a historic doughboy statue in Eureka Springs' Basin Spring Park.

The statue is about 11 feet tall, so some effort would have to be made to reach the face, said Berry.

"It's just beyond my comprehension why somebody would destroy a historic statue representing our veterans," he said.

"We are currently working on securing an arrest," he said in an email Friday afternoon.

Berry said that about $20,000 was spent a few years ago to restore the statue and base.

According to the Lovely County Citizen, Annie Ross House, a newspaper reporter, began a campaign around 1919 to purchase a doughboy statue for Basin Spring Park as a memorial to those who fought in the Spanish American War and World War I.

A contract was awarded in 1928 for the marble statue, according to the Citizen, which is a Eureka Springs weekly. But because fires destroyed newspaper records, exactly when the statue was installed in the park couldn't be determined, according to the article.

According to the Encyclopedia of Arkansas, the statue has been on its pedestal in the park since 1929.

An inscription on the front of the base reads: "In memory of our deceased World War veterans, Western District of Carroll County."

Exactly why U.S. service members in World War I were called doughboys is unknown, according to History.com.

"According to one explanation, the term dates back to the Mexican War of 1846-48, when American infantrymen made long treks over dusty terrain, giving them the appearance of being covered in flour, or dough," according to the website. "As a variation of this account goes, the men were coated in the dust of adobe soil and as a result were called 'adobes,' which morphed into 'dobies' and, eventually, 'doughboys.'"