IN THE GARDEN: Carolina jasmine good choice to replace weighty wisteria, with options for complementary planting 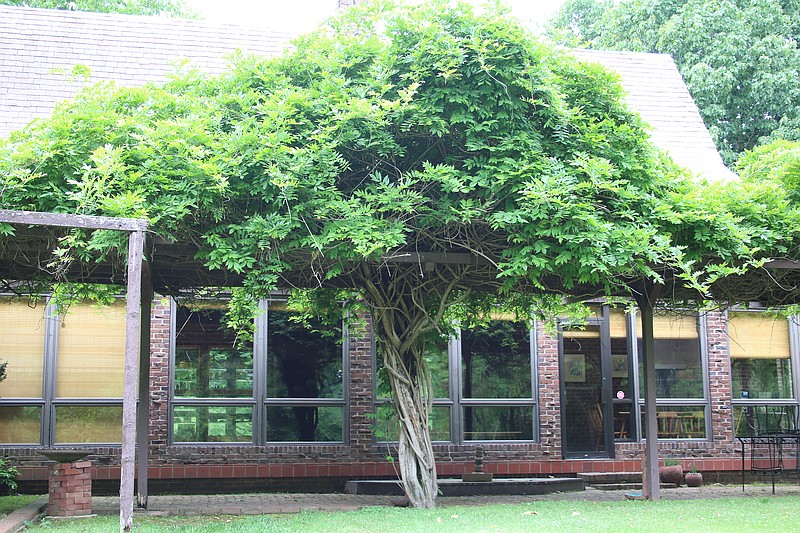 The weight of this almost 70-year-old wisteria is too much for its pergola, but the vine is likely supporting the pergola. (Special to the Democrat-Gazette)

Q: I have attached a photo of the back of the museum where we have a pergola that is covered with wisteria. It has been here since the early '50s. The weight has broken down the pergola. We are thinking of replacing the whole thing. We want to know what vine you would consider to replace the wisteria after we rebuild the pergola? We are considering Carolina jasmine. What do you think of that?

A: What a spectacular wisteria vine, and kudos for keeping it trained to the trellis and not letting it become invasive. Old wisteria vines often are the true support to a pergola or structure. I am sure when it is in bloom it is spectacular. You can try to remove it, but be aware that it will try to resprout, possibly for years.

I would consider trying a couple of different vines to extend the blooms. I like Carolina jasmine, and the fact that it is evergreen would be good too. It did get some winter damage last year, but many plants did. You could add some clematis, five-leaf akebia, or some of the newer varieties of the native trumpet creeper and cross vine. They should play well with each other.

Q: Four of my hollies look unhealthy, and the bark is splitting. Any ideas as to the cause and treatment?

A: Unfortunately, there isn't much you can do to stop the decay and loss of these hollies. The bark splitting could be a result of last winter's bitter cold, or it could be from an injury or disease, but as far along as the damage is, there is no recovery. I had a similar thing happen to two large loropetalum. They took a bad hit from the winter weather, seemed to fully recover but then started dying, with the bark splitting, in late July. I am cutting them to the ground and letting them start over. If you can't wait that long for recovery, your only option is replacement.

Q: A couple or so years ago I sent you a picture of this beautiful tree for identification purposes. I believe you said it was a Japanese snowball tree. Over the last 18 months it declined, and last month it seems to have died. I suspect I did not water enough, but I really don't know. Good news is there are green, healthy sprouts coming from the base of the tree (not from the ground, but from a limb cut). What can I do to rehabilitate it?

A: I think the situation may be very similar to the answer above for the hollies. I have seen other plants around town that have had similar problems. Just when we thought we didn't have as much winter damage as we suspected -- wham -- the real answer appeared. When you see splits in the stem, it often indicates the tissue froze from inside and then the outer bark cracked. They may have had enough reserves to begin to grow again, but when they were stressed by hot and dry conditions, they gave up the ghost. I watered my plants just fine, and two still died, so I don't think it was just not enough water. I see growth from the base, so you can cut off the dead tops and retrain it into a new tree, or you can start over.

Q: My hosta are very brown and ugly. Can I cut them back now or do I need to wait until frost, as I usually do?

A: Plants that didn't get enough water in August and September have shut down early. There is no need to wait for a killing frost to begin cleanup. Start cutting off the old growth, mulch and wait for spring and hope new growth appears.

Q: This is a vine growing near our barn. The berries are green then turn black. They look a lot like olives. Are they poisonous? We took these pictures today at Pea Ridge.

A: The vine in question is commonly called creeping cucumber vine, Melothria pendula. It is related to our common cucumber, Cucumis sativus. Creeping cucumber vine is edible, but beware. The berries, when unripe and light green can be eaten raw but can have a strong laxative effect, especially when black and ripe.