Biden meets with leaders to chart course on facing challenges by AAMER MADHANI AND JOSH BOAK THE ASSOCIATED PRESS | September 25, 2021 at 4:50 a.m. 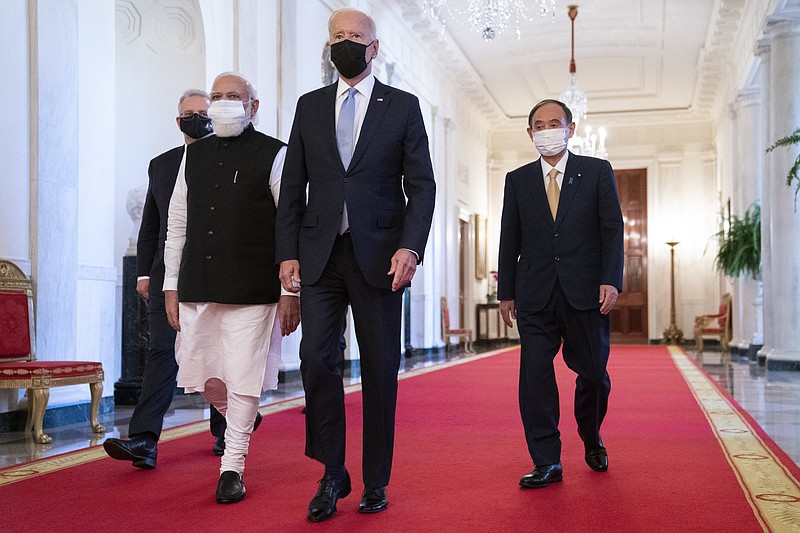 WASHINGTON -- Meeting with the leaders of India, Australia and Japan, President Joe Biden declared Friday that the U.S. and other member of the Indo-Pacific alliance known as "the Quad," are showing they "know how to get things done" in an increasingly complicated corner of the globe.

They made no direct mention of China, but the Pacific power was sure to be a major focus as they headed into private talks.

On broader issues, Biden has repeatedly made a case that the U.S. and like-minded allies need to deliver results on the coronavirus pandemic, climate change and other fundamental matters in what he's deemed a race between democracies and autocracies.

Morrison and the others seemed to pick up that message as they opened Friday's summit.

"We are liberal democracies, believe in a world order that favors freedom," Morrison said. "We believe in a free and open Indo-Pacific, because we know that's what delivers a strong, stable and prosperous region.

Before the gathering Friday afternoon, Biden sat down with Modi in the Oval Office.

The president made clear that he saw tightening relations with India -- the world's biggest democracy that neighbors Taliban-controlled Afghanistan and China -- as vital for both sides.

[Video not showing up above? Click here to watch » arkansasonline.com/925nations4/]

Modi, who met Thursday with Vice President Kamala Harris and American business leaders, noted the importance of the Indian diaspora for the U.S. economy and said he wanted to find ways the two countries could work together to strengthen their respective economies.

He was expected to bring up Afghanistan during his meeting with Biden and raise objections to the Taliban's effort to get recognition at the United Nations. The Indian government also has concerns about the influence it believes Pakistan's intelligence service exerted in how factions of the Taliban divvied up government offices in Kabul.

Biden was also to have a one-on-one with Suga, who is soon to step down from his post. Suga was expected to discuss China, North Korea, Afghanistan, the covid-19 response and climate change.

At the afternoon summit, the Quad leaders were expected to announce a coronavirus vaccine initiative and plans to bolster semiconductor supply chains. Biden announced that the allies had created a program to bring graduate students in science and technology to U.S. universities.

The Quad is an informal alliance formed during the response to the 2004 Indian Ocean tsunami that killed some 230,000 people. Biden has sought to reinvigorate the alliance, putting a spotlight on a chief foreign-policy goal: greater attention to the Pacific and a rising China.

The Japanese and Indian governments welcomed a recent announcement that the U.S., as part of a new alliance with Britain and Australia, would equip Australia with nuclear-powered submarines.

[Video not showing up above? Click here to watch » arkansasonline.com/925modi/]

That will allow Australia to conduct longer patrols and give it an edge on the Chinese navy. But the announcement infuriated France, which accused the Biden administration of stabbing it in the back by squelching its own $66 billion deal to provide diesel-powered submarines.

Tensions between Biden and French President Emmanuel Macron eased after the two leaders spoke Wednesday and agreed to take steps to coordinate more closely in the Indo-Pacific.

The White House meeting concludes a busy week of wider diplomacy for Biden, who addressed the U.N. General Assembly and hosted a virtual global summit on the pandemic.

Biden and leaders of other wealthy nations face criticism about the slow pace of global vaccinations and the inequity of access to shots between wealthier and poorer nations. The push-back occurs though Biden announced plans for the U.S. to purchase 1 billion doses of Pfizer vaccine to provide to the world.

Information for the article was contributed by Yuri Kageyama of The Associated Press.