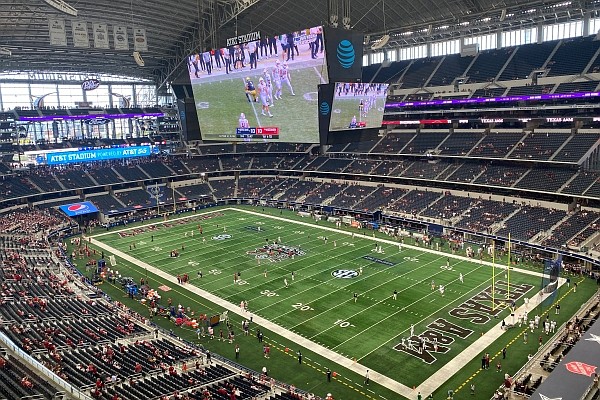 A view from the press box ahead of Arkansas' game against Texas A&M on Sept. 25, 2021 at AT&T Stadium in Arlington, Texas.

1:58, 4Q: Arkansas' defense comes up with a fourth-down stop with under two minutes to play, and Aggies fans are headed for the exits. Tre Williams got great pressure off the edge on the last play of the series.

Williams has three quarterback hurries and two sacks today. He has given the Aggies' left tackle fits all day long.

Arkansas' sideline is jacked, and it can taste 4-0.

3:17, 4Q: KJ Jefferson completed a big third-down ball to Warren Thompson for 10 yards and a first down, but that's all for Arkansas. Razorbacks' 34-yard punt puts Texas A&M at its 38 when play resumes.

7:04, 4Q: Arkansas' defense with a big stop, forcing a punt with the Aggies down 20-10. KJ Jefferson is back in at quarterback in place of Malik Hornsby.

8:32, 4Q: Arkansas got down to the Texas A&M 1 with a chance to go up two touchdowns. A penalty backed it up and the Razorbacks had to settle for a 24-yard Cam Little field goal. Arkansas' lead is 20-10.

Treylon Burks was just helped to the locker room. Not a good sign for Arkansas that he and KJ Jefferson are unable to go.

12:00, 4Q: Zach Calzada's pass over the middle hits off a lineman's helmet, is tipped by Bumper Pool and picked off by Montaric Brown. The call stands after a review. Razorbacks ball at the Aggies 48.

12:45, 4Q: Another drive that results in nothing for the Razorbacks. Arkansas has 46 yards of offense in the second half and zero passing game at the moment.

End 3Q: Arkansas' defense forced an Aggies punt on their most recent series, giving the Razorbacks possession at their 15. Malik Hornsby ran for 2 yards then Trelon Smith rushed for 19 yards to the 36.

Moments ago, KJ Jefferson went back into the injury tent and attempted to do some running drills with a trainer watching. He is on the sideline trying to run and cut. Arkansas leads 17-10.

3:52, 3Q: Arkansas doesn't have much in the way of a passing game with Malik Hornsby in at quarterback right now. Every play has been a run, though he has dropped back a couple of times. Razorbacks punt, and Texas A&M sets up shop at its 18 looking to tie the game.

4:59, 3Q: It seems as if KJ Jefferson's day is done. He left the game after making a throw to Treylon Burks that fell incomplete. Malik Hornsby entered the game and proceeded to run for a first down.

Hornsby has also fumbled a handoff that saw the yardage lost negated by an Aggies penalty, and Sam Pittman just had to call for time to avoid a delay of game.

7:51, 3Q: Isaiah Spiller has just gotten the Aggies right back in the thick of this game. His 67-yard score pulls Texas A&M within 17-10 midway through the third quarter.

He is up to 95 yards rushing on 12 carries. Looked like Jalen Catalon took a poor angle on the play, and Spiller made Arkansas pay. Big-time response incoming from the Razorbacks' offense and KJ Jefferson.

9:07, 3Q: Arkansas' defense got a stop and forced a punt, then the Razorbacks punted right back. Arkansas was then flagged for contacting a punt returner after he signaled for a fair catch. It is the second consecutive week that has happened.

Sam Pittman is upset with officials about the call. He might use most of the TV timeout to discuss it when them. The Razorbacks lead 17-3.

13:04, 3Q: KJ Jefferson came up gimpy during Arkansas' first series of the second half. He was shoved along the Razorbacks' sideline and appears to have injured his left leg in some way. After throwing incomplete on third down, Jefferson limped off the field, slammed his helmet down then went into the injury tent.

Half: No. 16 Arkansas leads No. 7 Texas A&M 17-3 at the break. The Razorbacks controlled the first half.

KJ Jefferson had touchdown passes of 85 and 48 yards to Treylon Burks and AJ Green, respectively. Burks' score was on a go route down the Arkansas sideline, and Green bounced off three Aggies defenders before scooting into the end zone.

Zach Calzada completed 12 of 22 passes for 85 yards. Lots of checkdowns for the quarterback so far. Running back Devon Achane has a team-high four catches but they've netted just 14 yards.

A&M tight end Jalen Wydermyer, who hurt the Razorbacks in a big way last season, did not record a catch in the first half.

Burks has five catches for 160 yards and a touchdown. Bumper Pool leads the Razorbacks with six tackles.

Arkansas will receive the opening kickoff of the second half.

:21, 2Q: Texas A&M got on the board with a 49-yard field goal. Arkansas' defense did a great job holding up when the Aggies were pushing the ball down the field looking for six. Thought Greg Brooks made a great play reading a middle screen to a receiver. He collared the receiver and forced a third-and-long situation. Arkansas is ahead 17-3.

2:29, 2Q: Arkansas was stuffed on fourth-and-1 inside the Aggies' 25 after Treylon Burks made a terrific one-handed catch on third-and-20. That's a big-time stop for Texas A&M, which will now have time to add a score before the half and halt some Arkansas momemtum.

7:34, 2Q: Tre Williams is starting to heat up on the edge for the Razorbacks. He has 2.5 sacks in his last five-plus quarters. His first one in this game forces a Texas A&M punt. Aggies still have just 91 yards of offense so far. Razorbacks' lead is 17-0.

10:01, 2Q: Arkansas just had its first bad series of the game offensively. KJ Jefferson completed a short pass to Treylon Burks, he then threw incomplete for Blake Kern on second down and Burks on third down on a slant.

Texas A&M regains possession at its 45 after a 35-yard punt by Reid Bauer. Arkansas leads 17-0.

10:39, 2Q: Arkansas' defense is in control right now. John Ridgeway has presented big-time problems for the Aggies' front and the Razorbacks are holding Texas A&M to 3.5 yards per play. Hayden Henry, Bumper Pool and Joe Foucha each have four tackles, too.

Over 14:31 of possession time, the Aggies have 91 yards of offense. Arkansas has 239 in 4:50 with the ball. Razorbacks take possession back at their 21 after another punt.

13:55, 2Q: Arkansas' lead over Texas A&M is now 17-0. KJ Jefferson checked down to running back AJ Green in the left flat, and the freshman pinballed off multiple defenders and sprinted into the end zone. Kind of an unreal play.

The Razorbacks have all the momentum at the moment. The Aggies seem a bit stunned.

It was all Razorbacks in the first quarter. Cam Little hit a 46-yard field goal, then KJ Jefferson hit Treylon Burks for an 85-yard score. Closing out the quarter, Arkansas dialed up a wide receiver pass from Warren Thompson to Treylon Burks.

The Razorbacks outgained the Aggies 184-75 and had the ball less than four minutes.

2:27, 1Q: KJ Jefferson hits Treylon Burks for an 85-yard touchdown on the first play from scrimmage after the Texas A&M punt. Arkansas' lead is 10-0.

Jefferson is now 10 of 13 passing for 372 yards and two touchdowns on throws 16+ yards downfield this season.

2:38, 1Q: Zach Calzada throws incomplete on third-and-21. Texas A&M was flagged for a false start out of its timeout. Arkansas takes back over at its 15 leading 3-0. The Aggies' punt went through the end zone, but Brady Latham was hit with a false start as well.

2:52, 1Q: Texas A&M has moved the ball well on its second series, moving down to the Arkansas 34 before Greg Brooks did a great job splitting a pair of blocks on a screen and bringing an Aggies receiver down for a loss. Texas A&M is facing third-and-16 when play resumes. The Aggies burned a timeout prior to the snap.

Arkansas has had some early issues slowing Isaiah Spiller. He's the shiftiest and best back it has played thus far. His six carries have covered 21 yards, and he's caught three passes for 24 yards.

8:20, 1Q: Arkansas leads 3-0 on a 46-yard kick by Cam Little that was right down the middle. A promising opening drive for the Razorbacks stalled around the Texas A&M 30. Treylon Burks was flagged for holding on a long Trelon Smith run, then Blake Kern was called for false start.

Kern later dropped a pass on third-and-9 and was one of the Razorbacks late onto the field for a field goal attempt. Arkansas had to call for time prior to the kick.

11:44, 1Q: The Aggies pick up two first downs on their opening series, but the Razorbacks were able to settle in, force a short gain on an Isaiah Spiller run and pressure Zach Calzada twice to force a punt.

15:00, 1Q: Arkansas won the coin toss and deferred possession to the second half. The Razorbacks' defense will hit the field first against the Aggies and quarterback Zach Calzada. Arkansas quarterback KJ Jefferson served as the team's rep at the coin toss.

Several Arkansas players who did not travel for the Texas A&M game:

Offensive linemen Ricky Stromberg and Dalton Wagner, who are considered questionable for the game, traveled with the team. Stromberg went through warmups as he normally would, and Wagner is operating with the first-team offensive line.