Hogs out to end 9-game skid against Aggies 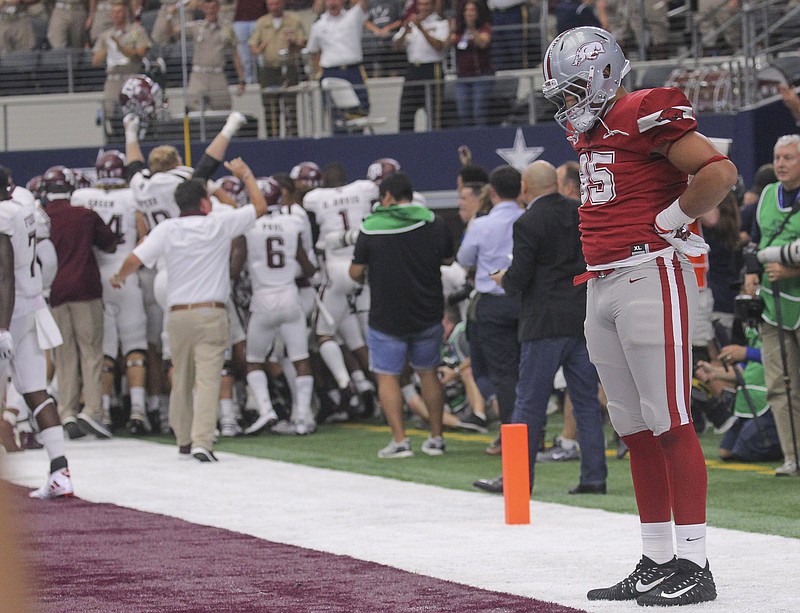 Arkansas tight end C.J. O’Grady stands dejectedly in the end zone at AT&T Stadium in Arlington, Texas, after Texas A&M’s game-ending interception in the Aggies’ overtime victory over the Razorbacks in 2017. Today, the Razorbacks will attempt to end their nine-game losing streak to the Aggies. (Democrat-Gazette file photo)

ARLINGTON, Texas — When the University of Arkansas contracted with old Southwest Conference rival Texas A&M to renew their ties in the Southwest Classic in 2009, the future looked bright for the Razorbacks.

The football program seemed to be on the rise under Coach Bobby Petrino, and a long-term series at the sparkling new stadium for the Dallas Cowboys, owned by alumnus Jerry Jones, could only raise the Razorbacks’ profile and attract more students and football prospects to Arkansas.

For a few years, the Razorbacks surged in Arlington. Jones, a standout lineman on the Razorbacks’ 1964 national championship team whose career was part of nine consecutive Arkansas wins in the series from 1958-66, happily presented the Southwest Classic Trophy to Petrino after Arkansas wins from 2009-11.

That stretch included one of the most remarkable comebacks in school history in a 42-38 victory in 2011 behind Tyler Wilson’s school-record 510 passing yards and Jarius Wright’s then-record 281 receiving yards. The Razorbacks trailed 35-17 at halftime before rallying to increase their win rate to 62.5% against the Aggies.

Texas A&M joined the SEC in 2012, threw a Heisman Trophy winning quarterback named Johnny Manziel at the Razorbacks the next two years and went on a sizzling run of its own with a 100% win rate since bolting from the Big 12.

Second-year Arkansas Coach Sam Pittman said the Razorbacks haven’t been holding up their end of the bargain.

“The rivalry hasn’t been a rivalry for the last nine years,” Pittman said, stating the message he would give to the players. “You have to win for it to become a rivalry a little bit more.

“I know in the past, obviously, we have won more than we lost in the rivalry, but recent years we haven’t done so well.” “You can’t go out there and play because we’ve lost however many in a row, you’re going out there to win this one,” Arkansas super senior Ty Clary said.

“Don’t worry about what we’ve done, just worry about playing our game,” Catalon said. “If we put the right focus on the right thing — that’s just winning the ballgame and nothing that happened in the past — then I think we’re going to be fine.” Texas A&M Coach Jimbo Fisher, who is 2-0 against Arkansas, touted the capabilities of the current Razorbacks and said he didn’t have to guard against over-confidence due to the Aggies’ recent dominance.

“No, I don’t, because all you’ve got to do is watch the film,” Fisher said. “And even though we have won those games, all those have been incredible football games.

“Our guys know they’ve all been four-quarter games all the way to the end of them. A couple of them up until the last play. … So I mean, our guys know this is a heck of a football team, and plus the way they’re playing right now, I don’t think we’ll have to worry about that.” Texas A&M junior safety Leon O’Neal didn’t put up any bulletin board material when asked about the Aggies’ nine-year run.

“I think of Arkansas as obviously a growing brand right now in football,” O’Neal said. “They’re doing a lot of good things, bringing that physical football back.

Pittman was offensive line coach in 2014. With a 28-14 lead and the ball in that game, Jonathan Williams ran 57 yards to the A&M 1 on the first play of the fourth quarter. However, the long run was brought back on a personal foul against Dan Skipper for a tripping penalty away on the play.

“If we don’t get the penalty it’s a three-score game at that point, and it’s late,” Pittman said. “If we would have scored from the 1, I think J-Dub ran it down to the 1, it would have made it very difficult.

“Then they came back. They beat us. There’s nothing to be said about it other than they beat us. But yeah, that was a tough one to swallow that day. … That’s one of the nine in a row, you know, that they’ve kept that trophy on the Razorbacks.” Two plays after Arkansas punted to the Aggies’ 12 following the penalty, Kenny Hill hit Edward Pope for an 86-yard touchdown pass to start the Texas A&M comeback.

Arkansas still had a chance to seemingly put the game away with 2:29 remaining but John Henson’s 44-yard field goal try missed wide left, leaving the door open. Two plays later, the Aggies burst through on Josh Reynolds 59-yard touchdown catch to tie the game at 28-28.

Arkansas led 21-13 with less than three minutes remaining in the 2015 game before the Aggies launched another one of their inevitable comebacks.

Arkansas is 12-4 in overtime games that don’t feature Texas A&M, including 10-3 versus other SEC opponents. The Razorbacks have not even scored in any of their three overtime losses to the Aggies.

Pittman is the fourth Arkansas coach to try to stop the slide, following John L. Smith, Bret Bielema and Morris.

The 2009 contract with Texas A&M led to a huge side benefit 12 years later. Because the game caused a postponement of the back half of a two-game series with Texas, that game was put off 12 years.

The Hogs capitalized on the delayed return date, dominating the No. 15 Longhorns 40-21 at Reynolds Razorback Stadium two weeks ago.

Pittman’s crew rode the momentum of that upset to a spot in the national polls and right into this matchup, the third former Southwest Conference opponent for Arkansas in the first four weeks.

“It’s going to be hard to go get the trophy now, I’m telling you,” Pittman said. “They’re ranked sixth or seventh, depending on which poll, for a reason. But we’ll do our best to get prepared and go down there and see what happens.”