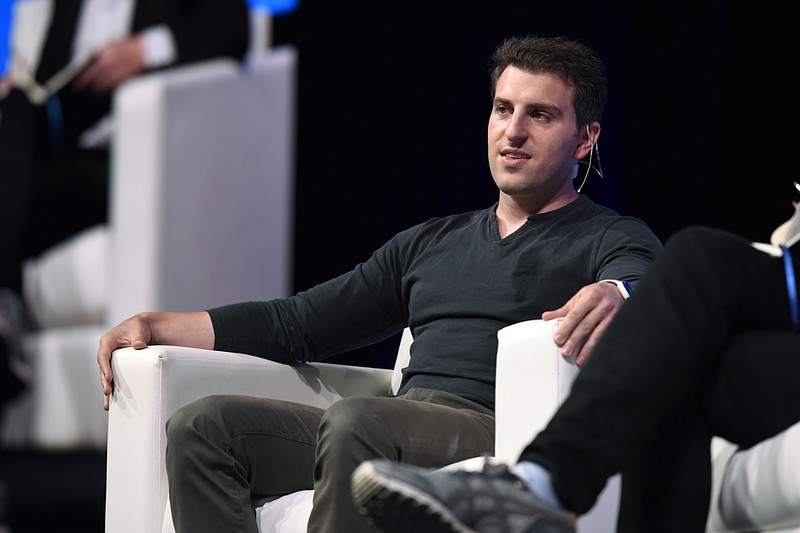 Brian Chesky, chief operating officer of Airbnb., speaks during the BoxWorks 2017 Conference at the Moscone Center in San Francisco on Oct. 11, 2017. MUST CREDIT: Bloomberg photo by Brian Short.

In a recent interview on Bloomberg TV, Chesky said Airbnb was already communicating with other platforms about party-house listings but that the companies could "of course go further" to include properties they've deemed to be dangerous.

If implemented, such cooperation would see Airbnb, Expedia Group Inc.'s Vrbo and other rental companies disclosing information on properties they've banned after violent crimes have occurred there, to prevent the listings from popping up on the other platforms.

"Anything we can do to be able to help people feel like Airbnb is a safe community" is something the company wants to prioritize, Chesky said.

Earlier this year, Bloomberg reported a series of stories about violent crimes occurring inside Airbnb properties, including the death of Lauren Kassirer. The 35-year-old New York City high school teacher was found naked, bruised and unconscious inside an Airbnb property on the Yucatan Peninsula in Mexico in 2018. After Kassirer's death, Airbnb permanently banned the villa she had rented -- and its host -- from listing on the platform.

However, Airbnb didn't warn other short-term rental providers about the listing, and it was only after the story was published that Expedia became aware of what happened and removed the listing from its platform.

"Traveler and community safety is most important to us, full stop, and so if that means broadening the scope of information we share with others, we will look into those opportunities," an Expedia spokesman said.

In June, the rival companies agreed to start sharing information on repeat party-house offenders after the pandemic forced the closure of bars and nightclubs, leading promoters to begin booking homes on the platforms to host events with live DJs and bottle service. The parties frustrated neighbors, spread the virus and in some cases resulted in fatal shootings.

The companies launched a Community Integrity Program to prevent repeat offenders who are delisted on one platform from shifting to another. "One platform alone can't solve this problem," the companies said at the time. "It requires an industry wide effort."

In the interview, Chesky also spoke about the future of travel, saying the flexibility of remote work that employees now enjoy is changing how trips will look in the next few years.

"This is the worst technology will ever be in our lifetime -- it's only going to improve," he said. "The world is going to continue to get more flexible, people are going to continue to have more options, and we're going to start to live in a world where all you have to believe is that people don't go back to the office five days a week and some business travel is curbed."

Chesky expects three-day weekends to become more common and that rental stays will get longer. About half of Airbnb's bookings are for more than a week, and one-fifth are for a month or longer, he said.

Despite topping Wall Street analysts' estimates for second-quarter bookings, the company said in August that third-quarter bookings will fall short of 2019 levels as the delta variant weighs on wary travelers.