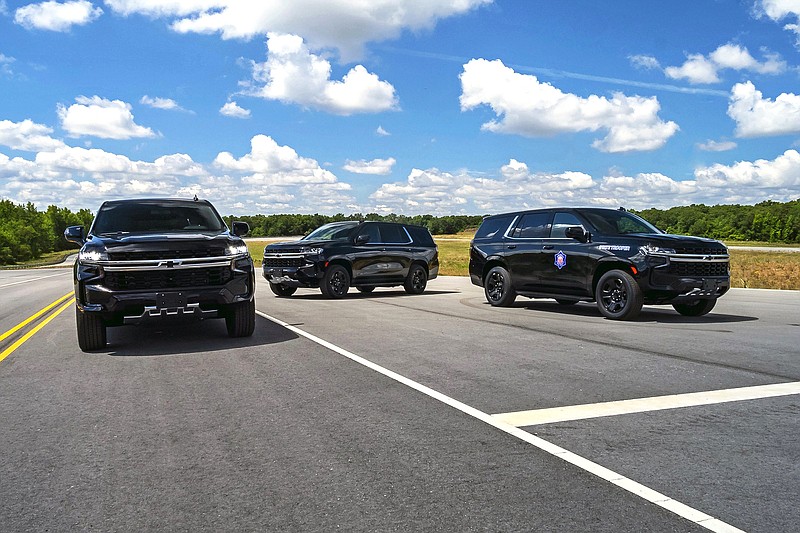 Submitted photo from ASP - Arkansas State Police have acquired 25 new low-profile highway patrol vehicles in an effort to combat a growing trend of incidents involving aggressive and distracted driving. The black Chevrolet Tahoes are partially marked with the state police insignia visible only from the passenger side, but are fully equipped to conduct traffic stops.

Reckless driving, including speeds in the triple digits, has significantly increased since the start of the pandemic in Arkansas and across the nation, officials say.

Arkansas State Police officials say the introduction of low-profile vehicles is one way they plan to attack the dangerous trend.

The agency recently purchased 25 black Chevrolet Tahoes that have a small police symbol only on the passenger side. About six of the vehicles are already on the roadway in Central Arkansas and the rest could be in service by the end of the month, spokesman Bill Sadler said Friday.

There was a 10.5 % increase in fatal crashes for a total of 8,730 deaths for the first part of 2021, the U.S. Department of Transportation released in a report earlier this month. The report said that preliminary estimates show that it's likely the increase in reckless driving that started in 2020 has continued into 2021.

"We must address the tragic loss of life we saw on the roads in 2020 by taking a transformational and collaborative approach to safety. Everyone -- including those who design, operate, build and use the road system – shares responsibility for road safety," Steven Cliff, the acting administrator of the National Highway Traffic Safety Administration, said in a release. "We are working closely with our safety partners to address risky driving behaviors such as speeding, impaired driving, and failing to buckle up."

Arkansas had fewer crashes overall in 2020 as fewer people were on the roadways, but there still was a 22% increase in deaths from crashes, with 611 deaths in 2020 and 499 in 2019, data from the Arkansas State Police shows. As of Sept. 16, 449 people have died in the state from traffic crashes.

State police director Col. Bill Bryant testified before a General Assembly subcommittee this summer about the epidemic. He told legislators that "law-abiding Arkansas motorists are finding themselves confronted with new threats on the highways and more frequently than ever before."

Maj. Forrest Marks, commander of the state police's Highway Patrol Western Region, said the agency points to speeding as the cause of more deaths. He said an increase in aggressive driving -- such as tailgating, weaving in and out of traffic and road rage -- has increased overall.

"We've never seen it at this level," Marks said. "I've been in law enforcement for 28 years and it is the worst that I've seen it."

"Once you continue to increase speed, your stopping distance is going to be greatly diminished," Marks said. "That is why our engineers do their studies and determine what is a safe speed on the roadway. The faster an object goes, the greater risk to that object and the occupants inside that vehicle."

There also is a risk to others traveling on the roads, Marks said.

"Any death or injury is something that we don't want to see," Marks said. "We have family just like you, just like everybody. We want them to travel safely as well. It can be frustrating sometimes. The behavior we are seeing is putting people others at such great risk."

The state police used $1.15 million from a National Highway Traffic and Safety Administration grant to purchase and equip 25 vehicles. Each vehicle was purchased at a base cost of $37,000 and equipped to law enforcement standards such as emergency lighting, weapon racks, communications gear, Sadler said.

"They tend to blend in with other traffic," Marks said. "What we wanted was an SUV vehicle that sits up. It is easier to look into the cockpit of a vehicle to see if there is any distracted driving that might add to the issues that are out there."

Marks said some have claimed low-profile vehicles are a type of entrapment.

"That is when you entice someone to commit a crime," Marks said. "This is blending in with traffic to catch someone who is already violating the traffic laws."

A countermeasure report released by the Transportation Department in September doesn't address low-profile vehicles as an option. It does rate high-visibility enforcement as having a low effectiveness in stopping or slowing speeding. Automated enforcement and covert cameras received the highest effectiveness rating, according to the report.

Troopers will continue using the white sedans marked with blue stripes and police markings. Each of the 12 highway patrol troops across the state will receive at least one of the low-profile vehicles.

Sadler said Friday that troops are receiving the vehicles as they become available from a contractor equipping them. Central Arkansas counties have received the first vehicles, as the region tends to have more aggressive violations than other parts of the state, he said.