Close to 50 uniformed positions vacant in Little Rock Police Department, up since this spring 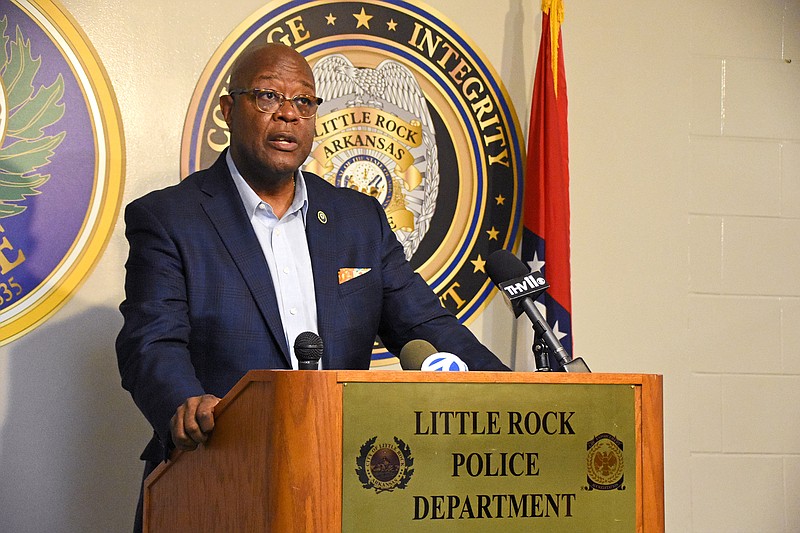 The number of vacant uniformed positions in the Little Rock Police Department has climbed since this spring to 48, according to the city's finance director.

Members of the Little Rock Board of Directors recently received a Sept. 10 memo that disclosed that there were 76 vacancies among full-time budgeted positions in the Little Rock Police Department.

The document from the city manager's office also listed 14 full-time vacancies in the city's Fire Department.

When city officials were contacted and asked for comment about the memo, the city's finance director Sara Lenehan on Friday provided more information via email.

As of Thursday, there were 79 total vacancies in the Police Department among the 754 authorized positions, she said.

Of the 594 authorized sworn positions, 48 were vacant -- two sergeants and 46 officers, she said. Of the 160 authorized civilian roles, 31 were vacant.

"I believe most City departments are suffering higher turnover and vacancy rates since the beginning of the Pandemic," Lenehan wrote.

A presentation from Lenehan at a meeting last month informed city board members that 35 uniformed positions in the Police Department were vacant as of the last payroll in March.

Since that report, the vacancy count for uniformed police personnel has increased by 13, Lenehan said Friday.

At the same August meeting, Mayor Frank Scott Jr. suggested that the private sector was seeing the same hiring difficulties as the city.

The total vacancies across positions authorized in the city's general fund, as well as the street and enterprise funds, totaled 248 at the end of the first quarter of 2021, Lenehan told board members last month.

The memo circulated to the mayor and Board of Directors said a request for information was made at an Aug. 10 agenda meeting with regard to current staffing levels in the two departments.

"According to staff, a factor to take into consideration is that both Departments transfer people, and the budget headcount does not keep up with transfers," the memo said.

When asked if the current vacancy count in the Police Department was higher at any point in the recent past, Lenehan said that on Aug. 31, 2011, there were 82 vacant positions -- 47 uniformed and 35 civilian.

Since last year, the Police Department has been embroiled in controversy as a series of lawsuits has pitted Chief Keith Humphrey against a number of his colleagues.

Retaliation claims against Humphrey stem from the handling of an investigation into the 2019 fatal shooting of Bradley Blackshire by then-officer Charles Starks.

Humphrey terminated Starks after the shooting, but Starks was later reinstated because of a judge's order. The officer ultimately chose to resign last year.

Humphrey filed a countersuit in 2020. In it he claimed that there was a broad conspiracy among members of his staff, officials from a local police union and others to force him out of office. His suit was dismissed Sept. 15.

The police chief is currently the subject of an internal city investigation following complaints from police personnel.

Despite the increased number of vacancies, Lenehan said the authorized headcount for uniformed personnel within the Police Department -- 594 as of the last day of August -- is "the highest it has ever been."