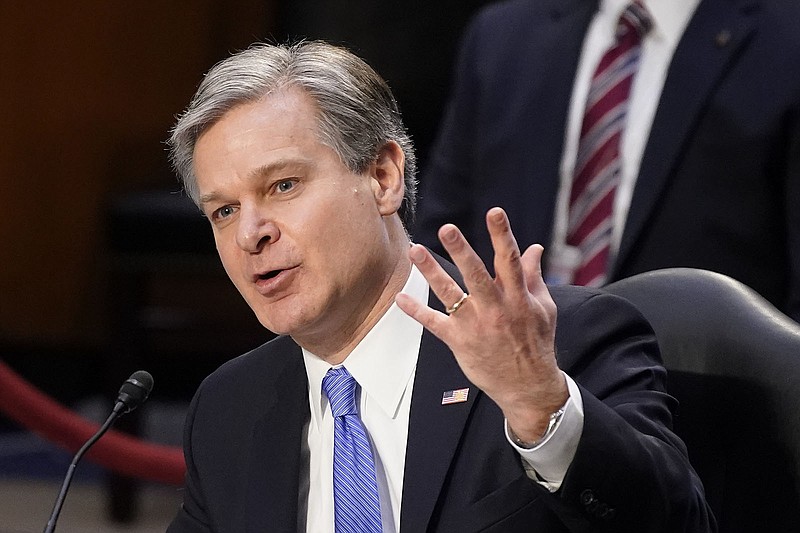 FBI Director Christopher Wray testified to Congress in March that the FBI was studying the quality of the intelligence it had gathered about Jan. 6. No informant was mentioned. (AP Photo/Patrick Semansky)

As scores of Proud Boys made their way, chanting and shouting, toward the U.S. Capitol on Jan. 6, one member of the far-right group was busy texting a real-time account of the march.

The recipient of those texts was his FBI handler.

In the middle of the unfolding melee that shook a pillar of American democracy -- the peaceful transfer of power -- the bureau had an informant in the crowd, providing an inside glimpse of the action, according to confidential records obtained by The New York Times.

In the informant's version of events, the far-right Proud Boys were largely following a pro-Trump mob rather than carrying out any type of preplanned attack.

After meeting his fellow Proud Boys at the Washington Monument that morning, the informant described his path to the Capitol grounds, where he saw barriers knocked down and Donald Trump supporters streaming into the building, the records show. They indicate that the informant traveled to Washington of his own volition, not at the request of the FBI.

At one point, his handler appeared not to grasp that the building had been breached, the records show, and asked the informant to keep him in the loop -- especially if there was any violence. The use of informants always presents law enforcement officials with difficult judgments about the credibility and completeness of the information they provide.

In this case, the records obtained by The Times do not directly address whether the informant was in a good position to know about plans developed for Jan. 6 by the leadership of the Proud Boys, why he was cooperating, whether he could have missed indications of a plot or whether he could have deliberately misled the government.

The records and information from two people familiar with the matter suggest that federal law enforcement had a far greater visibility into the assault on the Capitol, even as it was taking place, than was previously known.

At the same time, the new information is likely to complicate the government's efforts to prove the high-profile conspiracy charges it has filed against several members of the Proud Boys.

The identity of the informant, who was affiliated with a Midwest chapter of the Proud Boys, was not disclosed in the records.

The records describing the informant's account of Jan. 6 -- excerpts from his interviews and communications with the FBI before, during and after the riot -- dovetail with assertions by defense lawyers who have argued that even though several Proud Boys entered the Capitol, the group did not arrive in Washington with a preset plot to storm the building.

They also raise new questions about the FBI performance in tracking the threat from far-right groups.

The records -- provided to The Times on the condition that they not be directly quoted -- show that the FBI was investigating at least two other participants in the rally Jan. 6 and asked the informant to make contact with them, suggesting that they might be Proud Boys.

Moreover, the records indicate that FBI officials in Washington were alerted in advance of the attack that the informant was traveling to the Capitol with several other Proud Boys.

The FBI also had an additional informant with ties to another Proud Boys chapter that took part in the attack on the Capitol, according to a person familiar with the matter, raising questions about the quality of the bureau's informants and what sorts of questions they were being asked by their handlers before Jan. 6.

Christopher Wray, the bureau's director, acknowledged to Congress in March that the FBI was studying the quality of the intelligence it had gathered about Jan. 6.

"Anytime there's an attack -- especially one that's this horrific, that strikes right at the heart of our system of government, right at the time the transfer of power is being discussed -- you can be darn tootin' that we are focused very, very hard on how can we get better sources, better information, better analysis so that we can make sure that something like what happened on Jan. 6th never happens again," he said during the congressional hearing.

In a statement, the FBI said intelligence-gathering is central to its mission of protecting the American people and upholding the Constitution.

"While the FBI's standard practice is not to discuss its sources and methods, it is important to understand that sources provide valuable information regarding criminal activity and national security matters," the bureau said.

The question of whether extremist groups like the Proud Boys conspired in advance of Jan. 6 to organize the worst assault on the Capitol in more than 200 years is one of the most important avenues of inquiry being pursued by authorities. But the records describing the informant are only one piece of a much larger puzzle that includes other information about the group.

The informant, who started working with the FBI in July 2020, appears to have been close to several other members of his Proud Boys chapter, including some who have been charged in the attack. But it is not clear from the records obtained by The Times how well he knew the group's top leaders or whether he was in the best position to learn about potential plans to storm the Capitol.

Prosecutors have filed conspiracy charges against 15 members of the Proud Boys in four separate but interlocking cases, and they are some of the most prominent allegations levied in more than 600 cases filed in connection with the Capitol attack.

In seeking to prove that the Proud Boys planned the assault in advance, then worked together Jan. 6 to disrupt the certification of the Electoral College vote, prosecutors have claimed in court papers that their leaders raised money to get people to Washington; gathered equipment like protective vests and multichannel radios; and ordered subordinates to avoid wearing their typical black-and-yellow polo shirts in favor of more ordinary clothes.

The FBI has also collected incendiary social media posts and recordings of podcasts in which prominent Proud Boys members embrace a kind of revolutionary zeal after Trump's loss to President Joe Biden, with some suggesting that "traitors" should be shot or that civil war was on the horizon.

As part of their investigation, federal agents ultimately obtained thousands of private group chats sent among dozens of Proud Boys on the messaging app Telegram.

In one of the chats, written the night before the riot, a Proud Boys leader told his followers to be decentralized and use good judgment, adding, "Cops are the primary threat."

But statements from the informant appear to counter the government's assertion that the Proud Boys organized for an offensive assault on the Capitol.

On the eve of the attack, the records show, the informant said the group had no plans to engage in violence the next day, except to defend itself from potential assaults from leftist activists -- a narrative the Proud Boys have often used to excuse their at-time violent behavior.

Then, during an interview in April, the informant again told his handlers that Proud Boys leaders gave explicit orders to maintain a defensive posture on Jan. 6. At another point in the interview, he said he never heard any discussion that day about stopping the Electoral College process.