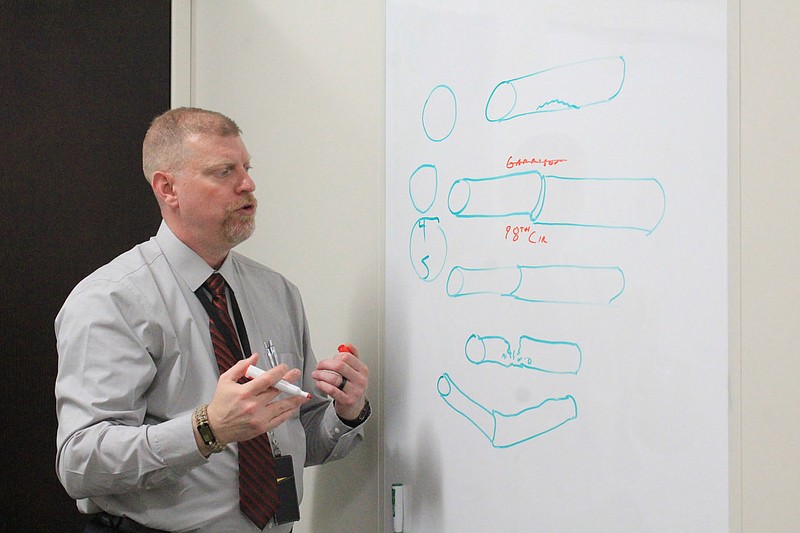 FORT SMITH -- Federal and state authorities issued the city's consent decree before any damage was assessed -- and far underestimated how much the city would have to shoulder in the time given.

The Department of Justice, Environmental Protection Agency and Arkansas Department of Environmental Quality in January 2015 issued a consent decree against Fort Smith for utility repairs after decades of sewage runoff into waterways including the Arkansas River. A Department of Justice news release from the date of issuing -- the only document with any estimate from the plaintiffs, according to utility director Lance McAvoy -- states the city would spend "more than $200 million over the next 12 years" to upgrade its sewer collection and treatment.

Between work done before and after the decree was issued, the remaining cost is $350 million. It bumps the cost to around $460 million, according an Aug. 24 presentation McAvoy gave to the city's Board of Directors.

The city now has nearly $350 million left to spend on the decree when money spent prior to its issuance is accounted for. The city is on a 17-year timeline for consent decree repairs following an extension in 2020 after the city proved sewer rates exceeded 2.5% of median household income. However, federal officials are enforcing the decree as if it's on a 12-year timeline with the understanding the additional five years are in effect, said City Administrator Carl Geffken.

Geffken, who was city manager in Reading, Pa. during its wastewater consent decree, said he's never seen the cost of mandates or similar projects of this scale anywhere close to their initial cost estimates. McAvoy said he's heard the same from officials in other cities with consent decrees. He believes such estimates recuse federal officials from responsibility because they can point to a time in the past when the estimate was made.

"From what I've seen talking with other municipalities that are under a consent decree, the federal government won't give you an assessment of the cost, because if you come in higher than what they assessed, it's grounds for, 'You said it was only going to cost $200 million when we negotiated this, so we're at $205 million. You lied to us, it wasn't negotiation in good faith,'" he said.

An open records request shows there's no record of the city receiving documents from the federal government assessing the cost of sewer repairs in the city.

When the decree was filed, the city had allowed more than 119 million gallons of raw sewage to flow into waterways. Many of the manholes and pump stations responsible for the overflows are in low-income and minority communities, the 2015 DOJ release stated.

Since the decree was issued, the city has raised residents' sewer rates 167% to collect the money to pay for repairs.

Carlos Whitmore, a barber at Faded Barber Shop, said he was happy to pay for sewer improvements in the city through his sewer bill. But he also said a sewer rate corresponding with the total cost of the consent decree before and after it was issued would likely affect "a whole lot of people" in the city. He personally expects his booth rental fee at the barber shop to go up because the business's water and sewer bill will go up, he said.

"That's going to damn near double or triple the rate on us," Whitmore said.

McAvoy said the city also has to take its low-income residents into consideration when discussing rate hikes to pay for the decree.

McAvoy said the total cost has been driven up by sewer pipes assessed as near "imminent collapse" or close to it due to criteria outlined in the decree. The pipes under the National Steel and Shipbuilding Company guidelines don't all have to be replaced because engineers are allowed to discern whether collapse is imminent and assess the consequences of a collapse, he said.

Additionally, officials at the Aug. 24 meeting said they would like three additional years due to the covid-19 pandemic and for consent decree money spent for repairs from the 2019 Arkansas River flood.

Geffken admitted the city got into the consent decree because it failed to maintain its sewer system. But he and others wish the city were able to more successfully negotiate the terms and conditions of the decree with the federal government.

"We can't ask the citizens to pay for penance for people that made decisions 40 years ago," said Settle.

The politics of the problem

While the terms of the consent decree itself are straining the city, leaders believe state and national politics play into the agreement as well.

Settle, who said the consent decree wasn't brought to the board until the end of the year, said it was rushed because it was "trying to get done before a new governor and a new attorney general came on board." The Environmental Protection Agency and Department of Justice at the time operated under President Barack Obama.

Geffken said each presidential administration's stance on environmental issues has influenced progress of negotiation. He said some administrations take a hard-line position on the environment while others balance the issues with protecting communities the mandates affect.

Geffken said negotiation under President Donald Trump left him and others hopeful about the future of the decree. He, 3rd District Rep. Steve Womack, R-Rogers, Fort Smith Regional Chamber of Commerce President Tim Allen and Calamita in September 2020 got a meeting with regional EPA officials, he said.

He said he made it clear in the discussion the city wants to comply with the consent decree but needed more accommodations.

"One of the assistant attorney generals' staff looked at me and said, 'So you just want us to have them hit a reset button,'" he said. "I said, 'Yes.'"

Geffken has also worked closely with Womack on the decree. Womack's office recently said the matter "can't be simply fixed with a legislative solution."

The five-year extension was granted by Holmes to the city after negotiation with the Environmental Protection Agency and the Department of Justice, Womack said in a statement.

"I've long said the decree is too stringent -- stakeholders must find a balance between compliance and unfair burdens," Womack said in his statement. "These are points I will continue to share with agencies."

Geffken wants federal officials to ease the city's burden. But he also wants to comply and make progress on the consent decree.

Geffken said the city has filed an appeal with the federal 8th Circuit Court of Appeals to ease the terms of the consent decree, specifically how many structures need to be replaced. McAvoy hopes they will rule in his favor, allowing his engineers to use more discernment on whether to replace pipes.

The Environmental Protection Agency and Department of Justice filed a response to Fort Smith's appeal on Aug. 26 in which it disagreed with the argument the city presented, according to court records. Fort Smith countered with its own response that was filed on Sept. 15.

This discernment, McAvoy believes, will drive down the cost of the decree.

"We can't use engineering judgment to say, 'You know what? We're going to keep an eye on that, but there's no cracks, there's no movement, everything is lined up fine. We just have a deformation,'" McAvoy said.

Geffken said he and his legal team could weigh the possibility of taking the appeal to the U.S. Supreme Court if the court of appeals doesn't rule in the city's favor. McAvoy said the city would risk wasting time and resources if they did this because the Supreme Court chooses which cases they wish to hear.

In the meantime, Settle suggested raising a sales tax to pay for sewer improvements.

"It wouldn't be a bad idea, instead of trying to add it in our bills," Whitmore said.

"Fort Smith is trying to fix decades of complacency, because you bury a pipe in the ground and everybody forgets about it," he said.