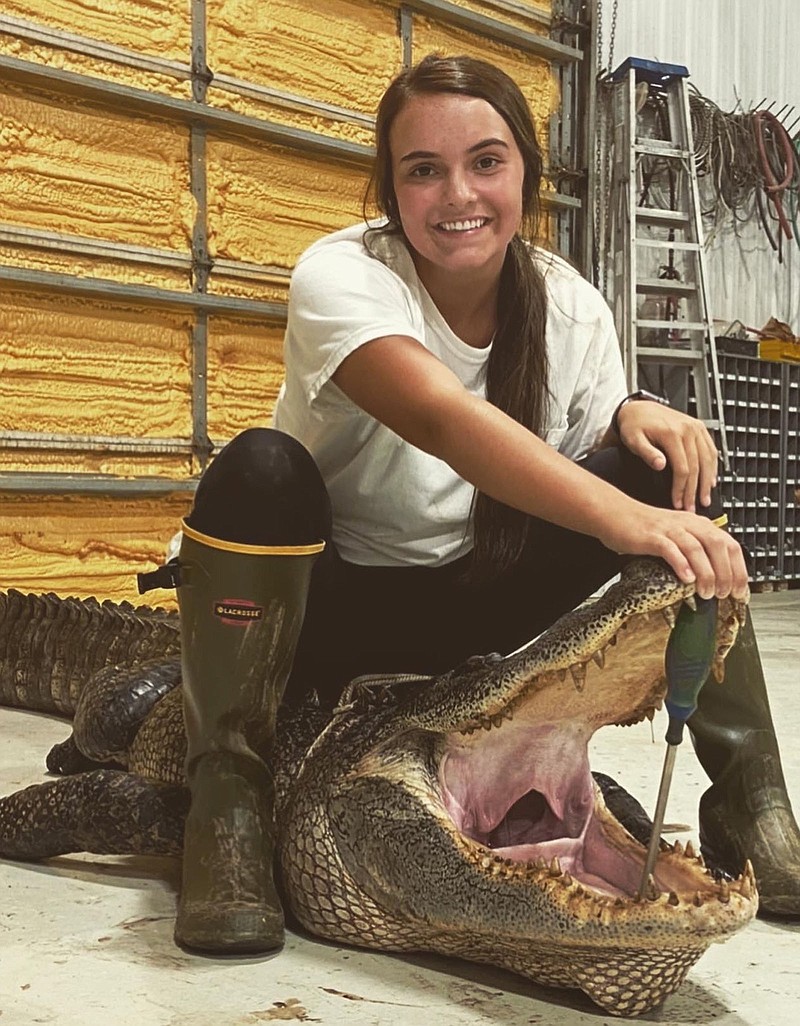 STUTTGART -- As a hunter, Blakely Stovesand craved the challenge of pursuing dangerous game, but she also wanted something unusual and generally inaccessible to even the most well-heeled big game hunters.

Hunting cape buffalo and leopards in Africa is exciting, but a lot of people do that. Anybody can if they have the money. Stovesand sought something dark and menacing, something that she would have to confront in its own element, on its own terms.

She didn't have to travel far to find it. Alligators, though beyond the reach of most hunters, inhabit the waterways of Southeast Arkansas.

Stovesand, 16, a junior at Stuttgart High School, is on the varsity cheer squad. She plays soccer and dances. She is also an avid hunter of ducks, dove, deer, hogs and wild turkeys. So is her brother Mitchell, 20. Both are highly accomplished afield, but Blakely wanted to raise the bar of their sibling rivalry. For example, Mitchell killed a 12-point buck. Blakely wouldn't rest until she got a 12-point, too.

"Mine had a wider spread," Blakely said.

Competition isn't Blakely's prime motivator. She is driven by a profound love for hunting.

"I guess I just grew up around hunting and always thought it was so cool, and now I love it," Stovesand said. "I really got into it when when my brother started killing deer. Everything is a competition between us. I had to one-up him."

Mitchell Stovesand had widened their gap by killing a 6-foot long alligator. Blakely resolved to get a bigger one.

"I've killed so many ducks and deer that I was kind of like, I need something new," Stovesand said. "I told my dad three years ago that I wanted go alligator hunting."

The Arkansas Game and Fish Commission issues landowners like Sloan Hampton of Stuttgart a number of private landowner alligator tags. They share them with friends. A private land alligator hunting permit is a hot ticket, so a hopeful friend must be patient, really patient. Hampton put Stovesand on his list, and in 2021, her time finally arrived.

How does one who has never hunted alligators practice for a gator hunt? Ever resourceful, Stovesand cut the top off a pole saw and fashioned it into a dummy harpoon. She drew Xs in the middle of paper plates and practiced stabbing the plates. In this way, she learned how to properly lunge and lean into the thrust, much as one does when gigging bullfrogs. She honed her aim until she felt confident she could drive a point home into a target that is considerably larger than a bullfrog, and a whole lot more dangerous.

Stovesand's chief assistant was Jason Berry. Stovesand girded her waist with a big leather belt that she borrowed from her mother. Berry held onto the belt to prevent Stovesand from falling overboard or being pulled overboard. That was prudent.

"When I stabbed the gator, I fell down because the alligator had so much power," Stovesand said. "Mr. Jason kept me from going into the water."

Prior to the climax was a lot of waiting and a fair amount of futility. Hampton Reservoir is full of alligators, including some giants. Stovesand and her helpers idled around the reservoir illuminating the red eyes of alligators lolling just below the surface.

"We'd pull up to them, and they'd go underwater," Stovesand said. "I hit one in the wrong spot and didn't get it. They all started going underwater, and I couldn't see them."

It was time to dial down a few notches and regroup. The hunters turned off their light and relaxed for about 90 minutes before resuming the search.

"We picked the light up and saw one, but it went under water," Stovesand said. "I saw another one, and I thought, 'Oh, this is going to be it!' All I could see was eyes staring up at me. I was like, 'Oh, wow!' I stabbed it under the front arm, because that's a soft spot."

The harpoon plunged deep and stuck. The alligator reacted violently and yanked Stovesand off her feet.

"If I didn't have that belt on, I would have been in the water," Stovesand said. "After I fell down, I got up, and the alligator started pulling the boat. It felt like we were on a rollercoaster ride. It pulled the boat for like eight minutes."

The gator began rolling. When it seemed to tire, Berry pulled it to the surface.

"The tail started coming up. It looked like a dinosaur," Stovesand said. "I was scared. I've never seen that before. My adrenaline was rushing. Mr. Jason was like, 'Get back up here and shoot this thing!' "

At the moment Stovesand shot, the gator thrashed. Stovesand's 20-gauge shotgun roared, and a hot load of No. 5 lead churned a geyser.

"We got soaking wet," Stovesand said.

Everybody in the boat was yelling and stomping and barking orders. Chaos reigned as Berry hauled the gator to the surface again.

"Mr. Jason said, 'When I tell you to shoot, shoot!' " Stovesand said. "The gator started rolling again, but Mr. Jason pulled it up again. This time I shot it right behind the eye."

The gator was 10-feet, 8-inches long. Stovesand said that about 10-12 inches of its tail had been bitten off. The group hauled it to a taxidermist in McGehee. Stovesand she is getting the head mounted, and she intends to convert some of the hide into a pair of boots. She is having the back hide converted to a wall mount. She said she hasn't decided on products for the meat.

The adventure made Stovesand an overnight celebrity in Stuttgart.

"Everywhere I go, people say, 'Hey, gator hunter,' or 'Good job, monster killer,' " Stovesand said. "It's a big accomplishment because it's different. Not a lot of people are ever going have an opportunity to kill an alligator."

Despite the excitement, or maybe because of it, the hunt scratched an itch that seems to intensify.

"When we took it to the taxidermist, I saw an elephant hanging on the wall, and I was like, 'Dad, I really need to kill an elephant now!' He looked at me like I was crazy. If I don't go with him, maybe I'll have a chance to go myself someday."

If she can keep her brother from doing it first.