Migrant flights out continue; some people allowed to stay by Compiled Democrat-Gazette Staff From Wire Reports | September 26, 2021 at 5:33 a.m. 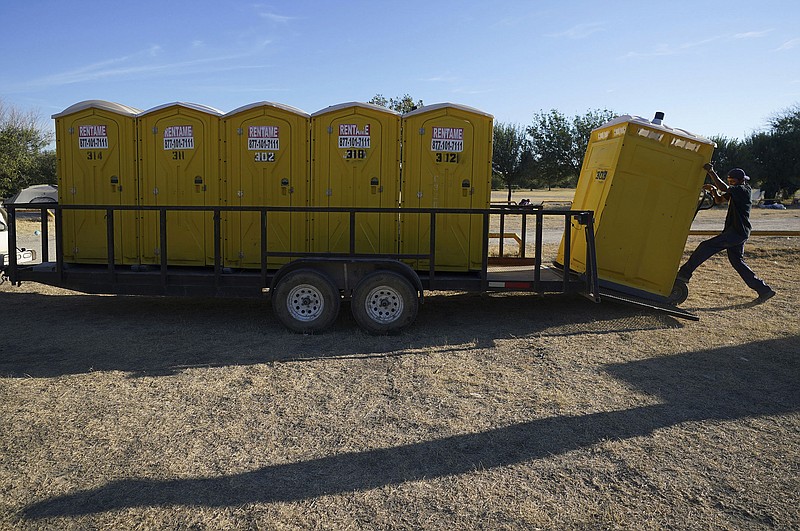 DEL RIO, Texas -- The Texas border crossing where thousands of Haitian migrants converged in recent weeks was to be partially reopened Saturday, the U.S. Customs and Border Protection agency announced.

Federal and local officials said no migrants remained at the makeshift encampment as of Friday, after some of the nearly 15,000 people were expelled from the country and many others were allowed to remain in the U.S., at least temporarily, as they try to seek asylum.

In a statement, officials said trade and travel operations would resume at the Del Rio Port of Entry for passenger traffic at 4 p.m. Saturday. It will be reopened Monday morning for cargo traffic.

The Customs and Border Protection agency temporarily closed the border crossing between Del Rio and Ciudad Acuna, Mexico, on Sept. 17 after the migrants suddenly crossed into Del Rio and made camp around the U.S. side of the border bridge.

Agents searched the brush Saturday along the Rio Grande to ensure that no one was hiding near the site. Bruno Lozano, the mayor of Del Rio, said officials also wanted to be sure no other large groups of migrants were making their way to the Del Rio area to try to set up a similar camp.

The Department of Homeland Security planned to continue flights to Haiti throughout the weekend, ignoring criticism from Democratic lawmakers and human-rights groups who say Haitians are being sent back to a troubled country that some left more than a decade ago.

In an outcry over the U.S. treatment of Haitian asylum-seekers, the beleaguered island country's prime minister pointedly said Saturday that inequalities and conflict drive migration. But he stopped short of directly criticizing Washington over the issue.

"We do not wish to challenge the right of a sovereign state to control the entry borders into its territory, or to send back to the country of origin those who enter a country illegally," Prime Minister Ariel Henry said in a video speech to the U.N. General Assembly's annual meeting of world leaders.

"Migration will continue as long as the planet has both wealthy areas, whilst most of the world's population lives in poverty, even extreme poverty, without any prospects of a better life," he said.

The number of people at the Del Rio encampment peaked last Saturday as migrants driven by confusion over the Biden administration's policies and misinformation on social media converged at the border crossing.

The U.S. and Mexico worked swiftly, appearing eager to end the humanitarian situation that prompted the resignation of the U.S. special envoy to Haiti and widespread indignation after images emerged of border agents maneuvering their horses to forcibly block and move migrants.

Many migrants face expulsion because they are not covered by protections recently extended by the Biden administration to the more than 100,000 Haitians already in the U.S., citing security concerns and social unrest in the Western Hemisphere's poorest country. A devastating 2010 earthquake forced many from their homeland.

The number of Haitians stopped at sea by the U.S. Coast Guard zoomed past 1,000 for this fiscal year after two interceptions of 260 migrants returned Friday to Haiti, the agency announced.

For the fiscal year that began Oct. 1, 2020, and will end Thursday, the Coast Guard reported crews have intercepted 1,119 Haitian migrants.

The Coast Guard, which states that it gives all migrants food, water and basic medical attention, said none of the migrants had "injuries or significant medical concerns."

The U.S. government expelled 2,324 Haitians on 21 flights to Haiti from Sept. 19 through Friday, according to the Department of Homeland Security. On Friday, the government operated four flights from Del Rio with 375 Haitian migrants; two flights to Port-au-Prince and two to Cap-Haitien. The department said the flights will continue "on a regular basis" as people are expelled under pandemic powers that deny migrants the chance to seek asylum.

The Trump administration enacted the policy, called Title 42, in March 2020 to justify restrictive immigration policies to prevent the spread of the coronavirus. The Biden administration has used it to justify the deportation of Haitian migrants.

A federal judge late last week ruled that the rule was improper and gave the government two weeks to halt it, but the Biden administration appealed.

Officials said the State Department is in talks with Brazil and Chile to allow some Haitians who previously resided in those countries to return, but it's complicated because some of them no longer have legal status there.

Homeland Security Secretary Alejandro Mayorkas said that the U.S. has allowed about 12,400 migrants to enter the country, at least temporarily, while they make claims before an immigration judge to stay under the asylum laws or for some other legal reason. They could ultimately be denied and would be subject to removal.

Mayorkas said about 5,000 are in department custody and being processed to determine whether they will be expelled or allowed to press their claim for legal residency. Some returned to Mexico.

A U.S. official with direct knowledge of the situation said seven flights were scheduled to Haiti on Saturday and six today, though that was subject to change. The official was not authorized to speak publicly.

No migrants were left Saturday morning in the camp on the Mexico side of the border. Authorities had moved the last migrants to a walled, roofless facility in downtown Ciudad Acuna where the Mexican immigration agency put some tents.

That shelter had 240 people as of Saturday morning, according to Felipe Basulto, the secretary of the municipality. The Mexican government has been moving migrants by land and air to the south of the country and was planning to begin flying some to Haiti in the coming days.

The Mexico office of the U.N.'s International Organization for Migration released a statement late Friday saying it is looking for countries where some Haitians have residency or where their children have citizenship as an alternative to allowing them to be deported to Haiti.

Luxon, a 31-year-old Haitian who withheld his last name out of fear, said he was leaving with his wife and son for Mexicali, about 900 miles west along Mexico's border with California.

"The option was to go to a place where there aren't a lot of people and there request documents to be legal in Mexico," he said.

At the Val Verde Border Humanitarian Coalition in Del Rio, migrants stepped off a white Border Patrol van on Friday, many smiling and looking relieved to have been released into the U.S. Some carried sleeping babies. A toddler walked behind her mother wrapped in a silver heat blanket.

Information for the article was contributed by Maria Verza, Juan Lozano, Sarah Morgan, Ben Fox, Nancy Benac and Jennifer Peltz of The Associated Press and by David J. Neal of the Miami Herald. 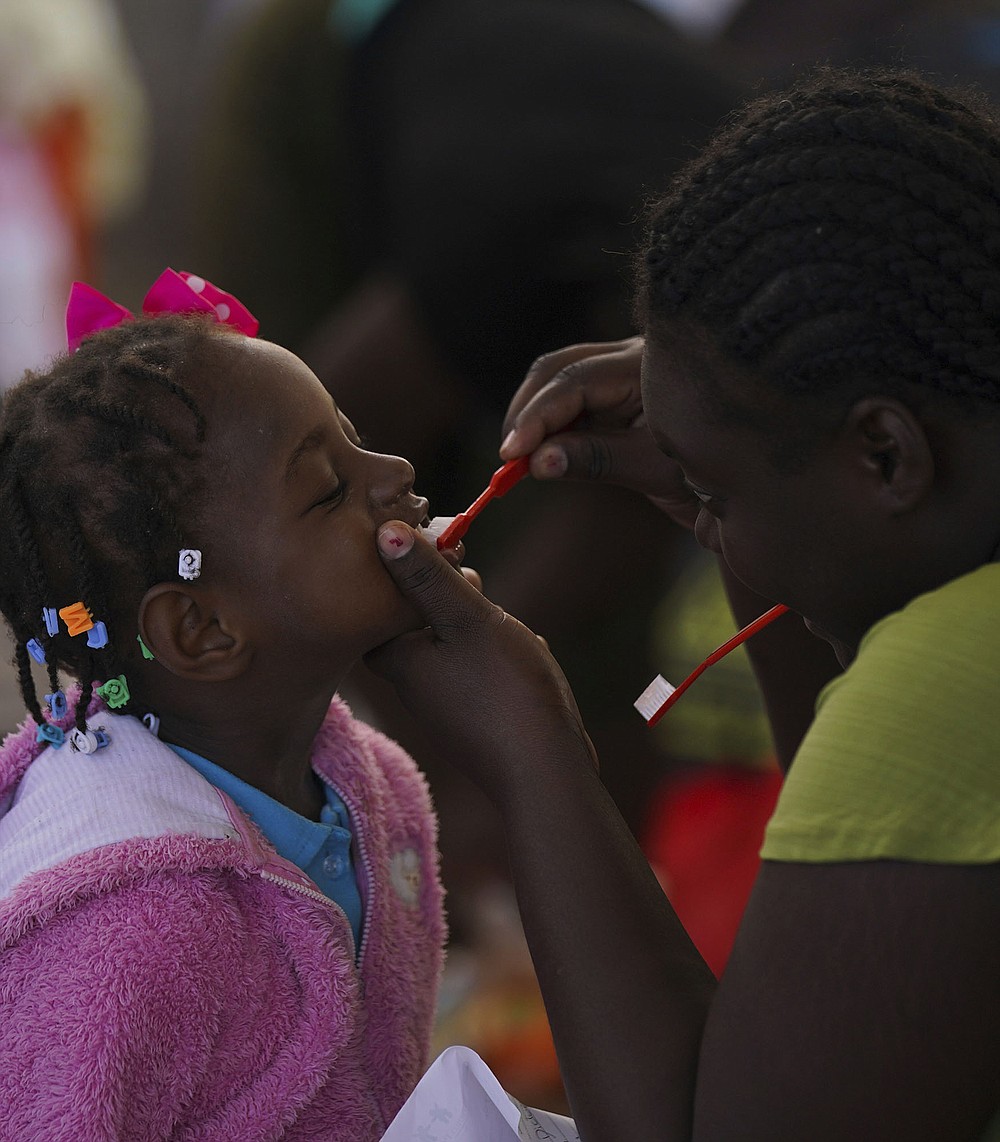 A Haitian migrant woman brushes her daughter's teeth Saturday in a shelter in Ciudad Acuna, Mexico, where authorities had moved migrants who had been cleared out of camps in Mexico and the United States. More photos at arkansasonline.com/926delrio/. (AP/Fernando Llano)