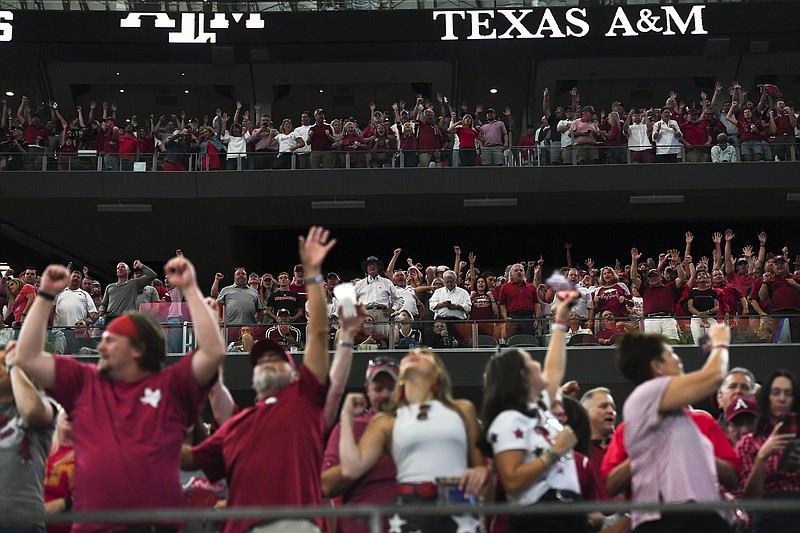 Jefferson hit Burks with an 85-yard touchdown pass in the No. 16 Razorbacks' 20-10 victory over No. 7 Texas A&M on Saturday in AT&T Stadium.

The play came a week after Jefferson and Burks had a 91-yard touchdown pass play in the Razorbacks' 45-10 victory over Georgia State.

The 85-yarder tied for the seventh-longest touchdown pass in Arkansas history. Ryan Mallett had 85-yard touchdown passes in 2010 to Cobi Hamilton against LSU and to Joe Adams against Tennessee Tech.

"They had rolled to man [coverage] and Coach [Kendal] Briles called it and KJ and I executed," said Burks, who beat cornerback Myles Jones down the sideline. "The O-line blocked.

"We got the play. I knew it was going to be open."

Last week's 91-yarder was the second-longest ever touchdown pass for the Razorbacks, surpassed only by a 92-yarder from Matt Jones to Richard Smith in 2002 at Tennessee.

So can we start expecting a big touchdown play from Jefferson to Burks every week?

"I really don't know," said Burks, who had six receptions for 167 yards. "It just happens the way it happens.

"We just come out and play Arkansas football. If it happens, it happens."

Arkansas went with a three-wide receiver set to open the game, giving senior De'Vion Warren his first start of the season.

It was the seventh career start for Warren, who started in place as the Razorbacks didn't start tight end Blake Kern for the first time this season.

Center Ricky Stromberg and offensive Dalton Wagner, who both left the Georgia Southern game because of injuries, started on Saturday.

Safety Simeon Blair made his first start of the season for the Razorbacks as they started six defensive backs. It was Blair's third career start.

Arkansas quarterback KJ Jefferson left the game midway through the third quarter with a bruised knee, but returned to lead the Razorbacks' final series when they drove from the Texas A&M 42 to the 9 and ran out the clock.

"He went out late with an injury, but I think he's just fine," Arkansas Coach Sam Pittman said.

Burks didn't want to be specific about why he had to leave the game.

Pittman also sustained a slight injury during the game and wore a bandage on his right hand in his postgame news conference.

"To be honest, somebody knocked a guy into me on the sideline," Pittman said. "I'm soft. I shouldn't have anything covering it up. The coach is soft."

Dave Van Horn, the Razorbacks' baseball coach, was on the sideline for Saturday's game at the invitation of Arkansas Coach Sam Pittman.

"Sam and I are pretty good friends," Van Horn said. "He's a great supporter of baseball and he knows that I love football.

"He called the other day and said, 'Man, I really want you to come to the game and hang out on the sideline. I said, 'I'll do it.'

Van Horn, who flew to the game with Arkansas Athletic Director Hunter Yurachek, didn't miss any fall practice by coming to the football game.

"We're halfway through fall baseball," Van Horn said. "Our guys needed a weekend off. It just worked out well for me to come to the football game."

Arkansas is among the few college baseball programs that generate revenue, but Van Horn understands the importance of the football program bouncing back under Pittman.

The Razorbacks came into Saturday's game ranked No. 16.

"I think it's big for the university, it's big for our athletic department and it's big for the state for football to have success," Van Horn said. "I think the fans just want to see the team compete hard, and they're certainly doing that under Sam."

Van Horn caught a pass thrown out of bounds by Aggies quarterback Zach Calzada in the second quarter.

Van Horn, who said he was a receiver at Winnetonka High School in Kansas City. Mo., held up the ball as Arkansas fans cheered and chanted his name.

Sankey in the house

SEC Commissioner Greg Sankey attended Saturday's game and said he's happy for how the Razorbacks are playing under Coach Sam Pittman after enduring a 1-23 SEC stretch from 2017-19.

Pittman is 7-7 at Arkansas after Athletic Director Hunter Yurachek had to fire Chad Morris, who was 4-18 overall and 0-14 in SEC games as the Razorbacks' coach.

"I'm happy for Sam the progress that he's led," Sankey said. "Hunter had to come in and change the narrative, and now the talk is about how the culture's changed, which is great to see."

Sankey attended his second Arkansas game this season along with the Razorbacks' 40-21 victory over Texas in Fayetteville on Sept. 11.

Students stormed the field after the game and Arkansas was fined $100,000, in accordance with SEC rules, for its second offense.

SEC schools agreed fans storming the field would result in a fine because of the safety issue it posed for the opposing team.

"That was quite a scene in Fayetteville two weeks ago," Sankey said. "It's great to see the excitement and energy back around the program again.

"But [fines for storming the field] are just a reality. As a conference we agreed to that, so we still have to do it even when people are in a celebratory mood."

Sankey said that if Arkansas fans storm the field a third time, it will result in a $250,000 fine.

Arkansas was the home team for Saturday's game, but as usual, the Razorbacks used the visiting locker room and were on the visiting sideline.

The Razorbacks and Aggies switch being the home team each year the game is played in AT&T Stadium, but Arkansas is always on the visitor sideline and dressing room because Dallas Cowboys owner Jerry Jones -- a former Razorback and generous UA booster -- likes to look across the field from his stadium suite and see Arkansas' team and fans.

On the last play of the first quarter, Arkansas receiver Warren Thompson took a lateral from quarterback KJ Jefferson and completed a pass to Treylon Burks for 27 yards.

Thompson also had one catch for 10 yards.

Saturday's announced crowd was 57,992. It marked the third consecutive Arkansas-Texas A&M game in AT&T Stadium that was under 60,000.

The largest crowd at AT&T Stadium for an Arkansas-Texas A&M game was 71,872 in the teams' first meeting there in 2009.

The teams are scheduled to continue playing in AT&T Stadium through the 2024 season.

Indications are that it will be a home-and-home series starting in 2025 when Arkansas will be the home team.

Arkansas got a lot of national air time on ESPN's 'GameDay' show on Saturday.

There was a feature on Razorbacks Coach Sam Pittman and ESPN's group of commentators spent several minutes talking about the Arkansas-Texas A&M game.

Kirk Herbstreit was the only ESPN analyst to pick Arkansas to win.

Down on the Horns

Fans from Arkansas and Texas A&M were rooting against each other on Saturday naturally, but they could agree on their mutual dislike of Texas.

When fans for both teams were shown on the giant video screen above the field, many of them flashed "Horns Down" signs.

Jamaal Anderson, a former Little Rock Parkview High School and Arkansas standout was an honorary captain for the Razorbacks.

Anderson converted from receiver to defensive end at Arkansas and was a first-team All-SEC player in 2006.

A first-round NFL Draft pick by the Atlanta Falcons in 2007, Anderson played for the Falcons, Indianapolis Colts and Cincinnati Bengals from 2007-12.

Aaron Wallace was Texas A&M's honorary captain. Wallace had a school-record 42 sacks for the Aggies from 1986-89 and played in the NFL with the Raiders and Broncos.

Musselman in the house

Arkansa basketball Coach Eric Musselman and his wife, Danyelle, attended the game and posed for a photo with Cowboys owner Jerry Jones and his wife, Gene.

Former Arkansas offensive linemen Dan Skipper and Hjalte Froholdt, who both played for the Razorbacks when Sam Pittman coached their position, were on the sideline.

On the big board

Among the people shown on the giant video board at the game:

-- A man propsoging marriage to a woman, who accepted. They were both wearing Arkansas shirts.

-- A woman who appeared to be sleeping in the stands. She was shown several times and never seemed to be awake.

-- Jennifer and Josh Clary, the parents of Arkansas senior offensive lineman Ty Clary. They were shown at least twice.