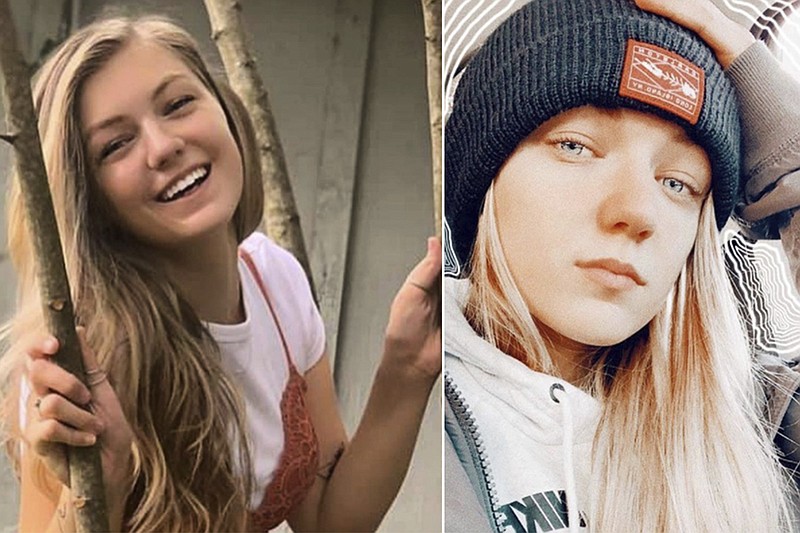 This combo of photos provided by FBI Denver via @FBIDenver shows missing person Gabrielle &quot;Gabby&quot; Petito. Petito, 22, vanished while on a cross-country trip in a converted camper van with her boyfriend. Authorities say a body discovered Sunday, Sept. 19, 2021, in Wyoming, is believed to be Petito. (Courtesy of FBI Denver via AP)

HOLBROOK, N.Y. — Mourners began arriving at a Long Island funeral home viewing on Sunday for Gabby Petito, whose death on a cross-country trip has sparked a manhunt for her boyfriend.

A line had formed outside the funeral home in Holbrook, about 35 miles east of New York City, by noon, and groups of firefighters were seen filing past. A fire truck sat on each side of the building, each with its ladder raised.

Across the street from the funeral home, a chain link fence was adorned with posters featuring Petito's image and messages such as, "She touched the world."

Petito was reported missing Sept. 11 by her parents after she didn't respond to calls and texts for several days while she and Brian Laundrie visited parks in the West.

Her body was discovered last Sunday in a remote area in northwestern Wyoming. Laundrie and Petito grew up on Long Island but in recent years moved to Florida.

Sunday's viewing is in Holbrook, about

Petito's death has been classified as homicide, meaning she was killed by another person, but medical examiners in Wyoming haven't disclosed how she died pending further autopsy results.

The couple posted online about their trip in a white Ford Transit van converted into a camper. They got into a physical altercation Aug. 12 in Moab, Utah, that led to a police stop for a possible domestic violence case. Ultimately, police there decided to separate the quarreling couple for the night. But no charges were filed, and no serious injuries were reported.

Investigators have been searching for Laundrie in Florida, and searched his parents' home in North Port, about 35 miles south of Sarasota.

On Thursday, federal officials in Wyoming charged Laundrie with unauthorized use of a debit card, alleging he used a Capital One Bank card and someone's personal identification number to make unauthorized withdrawals or charges worth more than $1,000 during the period in which Petito went missing. They did not say who the card belonged to.