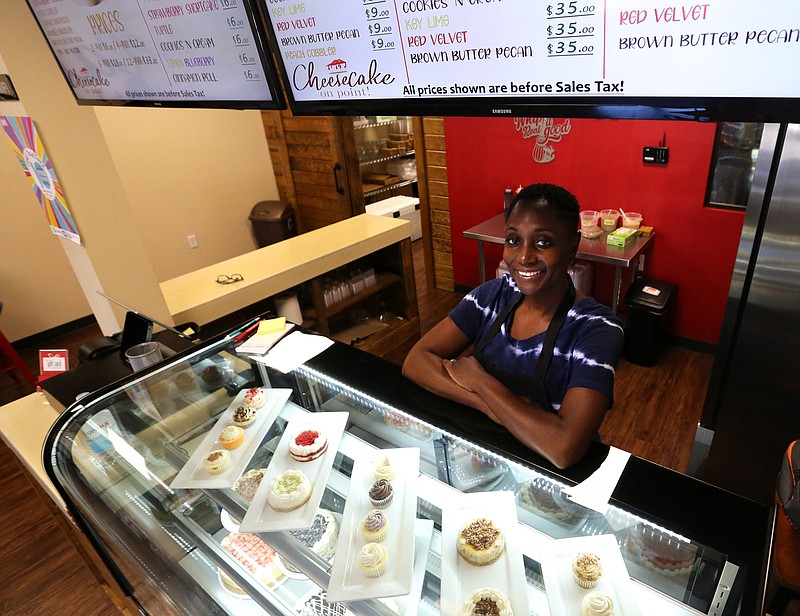 Matcha Norwood, owner of Cheesecake On Point, in her shop on Thursday, Sept. 23, 2021, in Little Rock. (Arkansas Democrat-Gazette/Thomas Metthe)

South Arkansas Community College in El Dorado recently began exploring ideas to expand its outreach to minority businesses and entrepreneurs in the region.

Efforts are focused on providing the technical expertise and financial backing that entrepreneurs require to survive and thrive, especially in the early stages of business development. School officials have turned to Forge Community Loan Fund of Huntsville to help craft a successful program.

"Southark is in the business of helping people start businesses, launch businesses and explore entrepreneurial opportunities," said Bentley Wallace, president of the college.

"The opportunity to work with a group like Forge could be the difference-maker in south Arkansas to launch viable businesses that add to the regional economy," Wallace said. "The support Forge provides is not currently available in south-central Arkansas."

Over the past five years, Forge has become a key partner for organizations like Southark that want to support and develop start-up businesses. The organization, formed in 1988 to primarily support the agricultural sector in Northwest Arkansas, is the oldest revolving community loan fund in Arkansas.

The Southark initiative is the latest example of Forge's efforts to create a statewide entrepreneurial ecosystem devoted to nurturing minority entrepreneurs and providing financial support to small businesses often ignored by traditional lenders.

"One of our primary goals is to get people loan ready and to support their business success," said Philip Adams, Forge's executive director. "These are businesses that can't get a loan through traditional financing. They're just too small for banks to fuss with.

"We link underbanked and underserved borrowers with investors, and we connect urban and rural communities across the state," he said. "We want to build an impact-investing culture in Arkansas where the focus is not on how much money an investment makes but on how it makes money."

That approach appears to be paying dividends, and investors are responding favorably.

Forge's loan portfolio has seen robust growth -- fueled primarily by contributions from nonprofit foundations and federal agencies -- and has sparked investments in minority- and woman-owned small businesses and entrepreneurs across Arkansas.

As a revolving loan fund, all of the money Forge lends to businesses is borrowed from other sources -- private investors, nonprofits and government organizations like the U.S. Small Business Administration. Forge makes loans from the borrowings, adds minimal interest to generate a return and repays its funding sources.

"We give them the flexibility to make loans according to their target market," said Edward Haddock, head of Small Business Administration operations in Arkansas. "The opportunity Forge provides addresses not only the start-up community but it helps those unbankable and underbanked individuals to start accessing credit to build their entrepreneurial dreams."

Small Business Administration has extended $6.6 million to Forge since 2014, leading to 261 loans in Arkansas through the end of August of this year, according to statistics from the agency.

Along with the loan support, the Small Business Administration provides grants for technical assistance to borrowers to help them build business plans and the mentoring they need to create a successful operation.

"The key to this program is helping these businesses get to the level where they can transition out of this product into a bank loan," Haddock said. "We understand that you can't just give a borrower money and send them on their way. They need to understand how to use the funding and how to manage it."

As a non-traditional lender with a community focus, Forge has more forgiving underwriting standards that attract borrowers wary of banks or who don't have the collateral required by banks. Forge examines credit scores, debt payment histories and prefers collateral contributions though the standards are less stringent than those demanded by traditional lenders.

"We don't have a box of underwriting standards that we try to fit borrowers in," said Mark Nelson, chief lending officer at Forge. "We look at every loan individually with the goal of helping to make a contribution to a business, even if it's less than they requested. We want our borrowers to think of us as partners."

Herb Culver built his Newton County greenhouse on loans from the organization beginning about 20 years ago when he borrowed $2,350. Culver, a carpenter, wanted to start the greenhouse, but had no credit rating, no technical business expertise and no idea how to create a business plan. Forge provided all of that.

"It was absolutely essential for me to have Forge," Culver said. "At the time, I didn't qualify for a bank loan, and I had no idea how to deal with banks and finance.

"Forge provided me with all the business tools and support I needed," he said. "They coached me through the process and asked all the key questions to help me think about the right things to grow my business."

Over the years, Culver returned for more support. "Every few years, I'd go back and get another loan to help with supplies and to buy in bulk," he said. "I built my business that way."

Now retired from that operation, Culver began serving on the Forge board about three years ago and has become a private investor in the loan fund. "I'm real proud to invest in the organization that gave me my start," Culver said. "I enjoy knowing there are other people getting the break I got."

The Arkansas Community Foundation and Winthrop Rockefeller Foundation also contribute to Forge's lending efforts through a combination of grants and investments. The community foundation has steered $500,000 to Forge while Winrock has contributed $320,000 to lending and technical-support efforts.

In addition, in the early days of the pandemic the two nonprofits contributed $175,000 in total to support a rapid-response loan program to keep businesses afloat. Forge made 26 loans, each in the range of about $4,000 to $5,000, to existing borrowers. To make sure businesses received funding quickly, the organization committed to a speedy approval process.

"That was a desperate time for businesses, and we were able to get them funding quickly so they could continue to move forward," Adams said. "We cut the process down to a one-day decision time and a two-page application."

The Arkansas Community Foundation also contributed $25,000 a few months ago to support Forge and the Imani Fund, a pilot program that offers microloans ranging from $5,000 to $25,000 to underserved entrepreneurs. Forge makes the loans and coordinates the efforts with Arkansas entrepreneur Benito Lubazibwa, founder of ReMix Ideas.

The community foundation and Forge share a like-minded emphasis on impact investing, according to the foundation's program Director Sarah Kinser.

"Forge is a unique entity in Arkansas," Kinser said. "They help people build their businesses and their family's financial stability in a different way. Forge creates an opportunity for Arkansans to come together and to invest in each other and to invest in their neighbors."

The loan fund also has been instrumental in helping the woman-owned business Cureate begin its first operations outside of the mid-Atlantic region, according to founder Kim Bryden. Cureate is selecting 10 food entrepreneurs in Northwest Arkansas to participate in a training program to refine their product offerings and prepare a go-to-market strategy.

Forge provided nearly $100,000 to launch the effort, which begins next month and includes a second cohort next spring. Food entrepreneurs who complete the program can turn to Forge for financial support. Cureate has a solid history in the mid-Atlantic area, having supported 11 cohorts with each involving 10-25 businesses.

"We like to partner with organizations like Forge because it's patient capital," Bryden said. "Forge provides wraparound support needed to capitalize these businesses and make them successful."

South Arkansas is a prime example of how Forge has extended lending efforts across Arkansas. In September 2016, Forge had made one loan in the area. As of last week, the organization has made 18 loans totaling $643,000 to small businesses in south Arkansas.

That effort has been spearheaded by Greg Modica, a small-business owner in El Dorado and Forge board trustee. "My role has been to shore up and really draw attention to what Forge can do as an alternative lending institution to support small businesses in this area," Modica said.

"The gap between white and Black entrepreneurs in the country is very wide when it comes to supporting small businesses," he added. "In El Dorado, that gap is even wider."

Modica has been coordinating the effort to build a business incubator or some form of entrepreneurial support organization at Southark. "There has been no one place down here to go for businesses to get all the support they need," he said.

Southark President Wallace is keen on the concept and feels confident it can work though the final structure still needs to be hammered out.

"We're not far enough in our discussions to know what this would look like," Wallace said. "We do know it would probably land on our campus, and we do have space for it. Everybody involved is a go on this. But if we're going to build this thing we need to make sure we position it for the absolute best opportunity for success."

Print Headline: Minority firms get a leg up