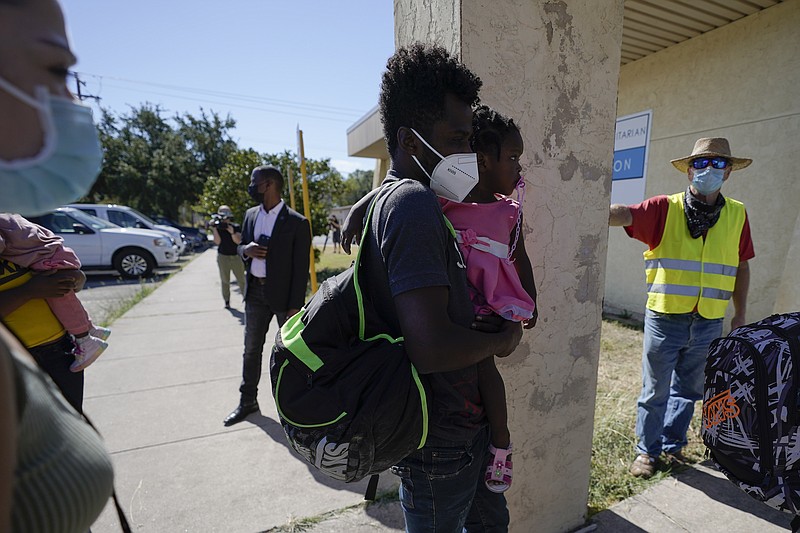 A man who gave his name only as Dave (right), from Toledo, Ohio, watches Friday as migrants are released from U.S. Customs and Border Protection custody in Del Rio, Texas. (AP/Julio Cortez)

DEL RIO, Texas -- As Haitian migrants stepped off a white U.S. Border Patrol van in the Texas border city of Del Rio after learning that they would be allowed to stay in the country for now, a man in a neon-yellow vest stood nearby and quietly surveyed them.

Dave, who didn't want to give his last name because he feared a backlash for trying to help people who entered the U.S. illegally, didn't see his friend Ruth in this group. But he wore the bright safety vest so she would be able to spot him in the crowd when she arrived with her husband and 3-year-old daughter.

"I feel like my friend is worth my time to come down and help," he told The Associated Press on Friday.

[Video not showing up above? Click here to watch » arkansasonline.com/926welcome/]

On Tuesday, Dave set out from his hometown of Toledo, Ohio, and made the nearly 1,300-mile drive to Del Rio, where up to 15,000 migrants suddenly crossed in from Mexico this month, most of them Haitian and many seeking asylum.

The 64-year-old met Ruth over a decade ago during a Christian mission to Haiti. Over the years, Dave would send Ruth money for a little girl he met in an orphanage whom he'd promised himself he would support. Ruth always made sure the girl had what she needed.

Last month, Ruth and her family left South America, where they briefly lived after leaving their impoverished Caribbean homeland, to try to make it to the U.S. Dave told her he'd be there when they arrived to drive them to her sister's house in Ohio.

"I just see it as an opportunity to serve somebody," he said. "We have so much."

The nonprofit, the Val Verde Border Humanitarian Coalition, has received dozens of drop-offs from U.S. Border Patrol agents since the sudden influx of migrants to Del Rio became the country's most pressing immigration challenge. Its operations director, Tiffany Burrow, said the group processed more than 1,600 Haitian migrants from Monday through when the camp was completely cleared Friday, assisting them with travel and resettlement necessities.

This is nothing new for Burrow, who has watched Haitian migrants cross into Del Rio in smaller numbers since January. But this recent wave overwhelmed her small group.

"It's a different volume. And the eyes of the world are on us this time," Burrow told the AP.

As Dave waited Friday for the next bus to arrive, he shimmied a child seat into place in the back of his vehicle. It was for Ruth's toddler and was the first thing he spotted when he stopped at a thrift store on his way out of Toledo. He viewed it as a little sign he was doing the right thing.

Ruth and her family had spent the past week at the bridge camp and Dave had been communicating with her through WhatsApp. But all communication stopped Thursday around noon. He said Ruth's sister in Ohio also hadn't heard from her.

Still, Dave waited, scrolling through a list of "what ifs." He wondered aloud if her phone died or if she was in a Border Patrol facility with strict rules about electronic devices.

"I'm putting a lot of faith in my phone," he said, laughing.

Like Dave, Dr. Pierre Moreau made the trip to Del Rio from Miami to help. A Haitian immigrant himself and U.S. Navy veteran, he saw the images unfolding from the camp and booked a flight.

"That was devastating. My heart was crying," Moreau said. "I told my wife I'm coming, and she said, 'Go.'"

Moreau didn't have a plan -- just a rental car full of toiletries and supplies he hoped to pass out to any migrants he came across.

"I'm concerned about my brothers and sisters. And I was concerned with the way they were treated," he said.

Dave said he hates how politicized the border issue has become.

As he waited in his car, Dave gushed over how hard Ruth had worked as a nurse to get to the United States -- a dream she's held for over a decade. He said he knows she'll do the same in the U.S. and that all he's doing is giving her and her small family a leg up.

"I help them with their first step," Dave said. "And like a little child, next time you see them, they'll be running."

Every time a Border Patrol bus or van pulled up to the coalition, Dave and his yellow vest would cross the street. He waited as each migrant climbed out, hoping to see Ruth, and he even darted over to one woman thinking it was her.

As news broke Friday that the camp had been cleared, Dave still held out hope that she would arrive. But 10 hours after he pulled up, the coalition announced that it had received its last busload and that no more would be arriving from the camp.

This wave, at least for now, was over for Del Rio. But Burrow said there likely will be others.

Dave stood up from his folding chair and started walking back to his car. He still hadn't heard anything from Ruth and he again speculated as to where she and her family might be, including that they could have been sent on a deportation flight back to Haiti.

He looked defeated but said he didn't plan to drive back to Ohio until he heard from Ruth -- not until he knew his friend was OK.

"I cringe when I hear the beep that it's going to be the wrong message," Dave said. "But I try to keep hoping. I don't know what else I can do."