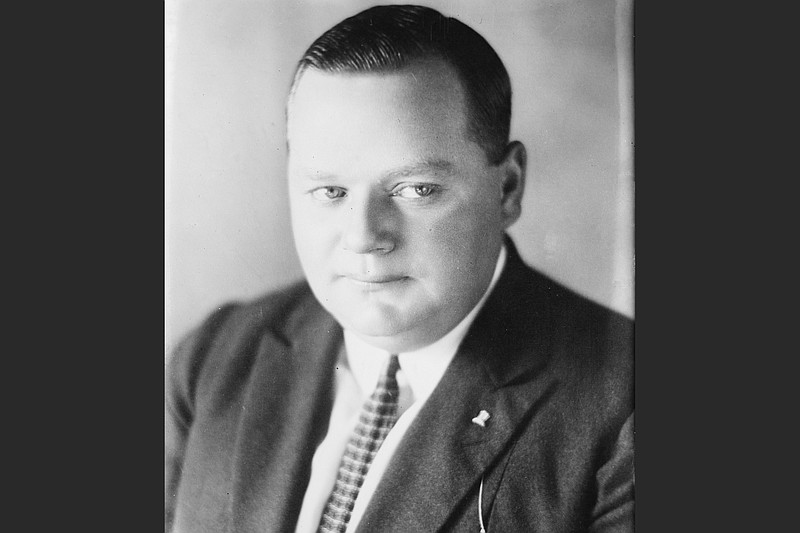 Today we continue with the ruination of Roscoe Conkling Arbuckle, circa 1921.

His stage name was Fatty Arbuckle, and he was a big, graceful actor with acrobatic ingenuity and a befuddled charm that radiates through the few of his many silent films one finds preserved in the aspic of YouTube.

As we went over last week (see arkansasonline.com/927this), 100 years ago, a determined bunch of hardworking news-service reporters attached themselves to Arbuckle after he was charged with murder. Newspapers across the nation — including at Little Rock — gave scandalized readers the blow-by-blow coverage as an inquest looked into the death of a woman who attended a three-day party Arbuckle and friends threw in a hotel in San Francisco.

Her name was Virginia Rappe (pronounced Rah-pay), and she was about 25 years old. If you spend only a little time looking for information about her, you will read all manner of speculation about her habits, motives, character. Whatever — nobody deserves to die so young, after terrible pain. What does appear certain from this great distance is that Arbuckle did not mess with her, maim her or kill her.

Unfortunately for him, an extortionist named Maude Delmont also attended his party, and based upon her unreliable claims, a grand jury tagged Arbuckle with manslaughter. The fact that this party was one of countless gin-soaked gatherings of young scofflaws in town from Los Angeles — during Prohibition — led the energetic prosecutor, Matthew Brady, to charge Arbuckle with first degree murder, too.

The first paragraph says these unnamed locals' reaction to "the tragic death of Virginia Rappe and the arrest of Fatty Arbuckle as her murderer" was not shock but rather "I told you so." They had expected something bad:

Drunken scenes made the cafes too rough for respectable residents:

"Such places have become 'thrillers' where the tourists were taken and the action has been provided by the hangers-on, the riffraff of oversalaried boom-time supers."

Where there is smoke, there's usually fire; but a small amount of flame on green pine can generate a choking billow, and the Hearst reports carried in the Gazette fanned it up:

"One authority high up in the theatrical world remarked ... 'The whole picture industry is aware of what goes on at Great Neck [Long Island, N.Y.] and Hollywood. They have long expected that something tragic would happen. Stories of drug parties, liquor parties and other forms of debauchery by certain individuals at various parties throughout the country are no longer new.'"

At Thermopolis, Wyo., a mob of about 150 boys and men, described as cowboys, shot up a theater where an Arbuckle film was showing and burned its reels in the street.

At College Springs, Iowa, a farm wife told her 16-year-old daughter to remove photos of Arbuckle from the walls of her room. The girl ran away. Searchers found Ada Gillfillan three days later, semiconscious and dehydrated in a hay stack 18 miles from home. She clasped a photo of Arbuckle to her chest.

Arbuckle's associates spoke up for him. His estranged wife rushed to his side. His stepmother in California and residents of the town in Kansas where he was born all insisted he was a great guy, although the stepmother added that if he was guilty he should be punished "to the limit."

In Brady's rush to trial, someone realized Delmont had a sleazy rap sheet and there wasn't evidence for the capital murder charge. So, Arbuckle was tried for manslaughter — not once but three times from November 1921 through April 1922. The Bar Association of San Francisco has an interesting analysis of these trials online; see arkansasonline.com/927bar.

His lawyers introduced medical evidence that Rappe had a chronic bladder condition, and her autopsy found no marks of violence and no sign of sexual attack. The defense team also had witnesses ready to testify against Rappe's character, but Arbuckle wouldn't allow it.

Jurors voted 10-2 for his acquittal, but that was a hung jury. The jury in his second trail also deadlocked.

He spent more than $700,000 defending himself. During his third, 31-day trial, he let his attorneys bring out their evidence against Rappe. This jury took five minutes to return a "not guilty" verdict. And then they blasted the prosecution. The 14 jurors (including two alternates) apologized to Arbuckle, in writing. The foreman read a statement, including:

"We feel that a great injustice has been done to him. We feel also that it was only our plain duty to give him this exoneration, under the evidence, for there was not the slightest proof adduced to connect him in any way with the commission of a crime. He was manly throughout the case and told a straightforward story on the witness stand, which we all believed. The happening at the hotel was an unfortunate affair for which Arbuckle, so the evidence shows, was in no way responsible. We wish him success and hope that the American people will take the judgment of fourteen men and women who have sat listening for thirty-one days to evidence, that Roscoe Arbuckle is entirely innocent and free from all blame."

Headline in the Gazette:

Arbuckle did plead guilty to a liquor charge and paid his fine. But the next week, the Motion Picture Producers' Association's new head censor, Will H. Hays, caused the cancellation of 10,000 contracts for the screening of Arbuckle films, including one of three new shorts that had ended production just before his arrest.

Hays pardoned Arbuckle in December that year in the spirit of Christmas; but the comedian's career was toast.

Under his father's name, William Goodrich, Arbuckle worked behind the scenes as a director and screenwriter. Friends helped him get by; Buster Keaton shared royalties with him. In February 1930, the Gazette reported that Arbuckle had directed two successful films under the pseudonym Will B. Good, which was a joke name reportedly suggested by Keaton.

[Video not showing above? Click here to watch: arkansasonline.com/927pop]

In June 1932, Arbuckle married actress Addie McPhail, his third wife. A decade after his acquittal, he starred in two Warner Bros. talkies, "Hey Pop" and "Buzzing Around." They were well received. The studio hired him to make a feature film.