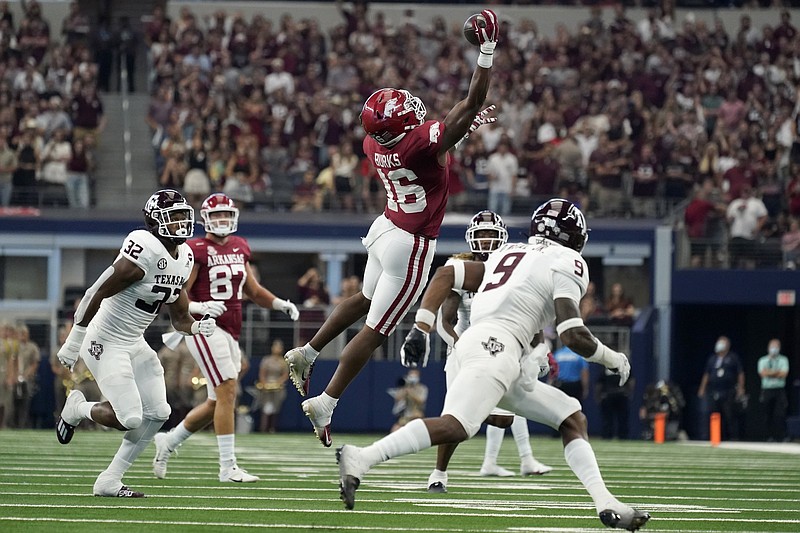 ARLINGTON, Texas -- The Arkansas Razorbacks' Texas three-step has paid big dividends with a massive jump in the national polls on Sunday.

The University of Arkansas (4-0) shot up eight spots in the Associated Press poll to reach No. 8 following Saturday's 20-10 upset of No. 7 Texas A&M at AT&T Stadium.

Arkansas has beaten three of its old Southwest Conference rivals -- Rice, Texas and Texas A&M -- in addition to Georgia Southern in the first month. The Razorbacks also advanced with a bullet in the USA Today Coaches Poll, moving seven spots to No. 11.

Arkansas is one of five teams, along with Alabama, BYU, Iowa and Penn State, to defeat two teams ranked in the top 25 this season. The Razorbacks and the Crimson Tide, the defending College Football Playoff champion, are the only teams in the country with two wins over top 15 teams.

The Razorbacks' hot start and poll ascension have set up a huge showdown at No. 2 Georgia (4-0) on Saturday at 11 a.m. Central at Sanford Stadium in Athens, Ga. The game will pit second-year Arkansas Coach Sam Pittman against Georgia Coach Kirby Smart, who hired Pittman away from Arkansas in 2016 for a four-year stint with the Bulldogs.

The game will attract plenty of hype in any event, but that was compounded on Sunday when ESPN announced its weekly "GameDay" broadcast will originate from the Georgia campus on Saturday.

The attendance appeared to be a 50-50 split between Arkansas and Texas A&M fans on Saturday, but the more numerous big plays by the Razorbacks seemed to generate louder reactions.

"I'm certainly very, very grateful for the state of Arkansas, how they traveled down here to the game," Pittman said. "They were loud and much appreciated."

One of the key components to Arkansas' game plan was taking advantage of Treylon Burks in one-on-one situations with Texas A&M defensive backs, and the decision paid off handsomely.

Burks caught an 85-yard touchdown pass on a sideline go route against Myles Jones on the first snap of the Razorbacks' second possession to take a 10-0 lead and set the tone. Quarterback KJ Jefferson did a good job of looking a safety off just long enough to keep him from getting in on the play.

"Going in ... we just wanted to try to isolate him," Jefferson said. "Him and the corner, just knowing he could take advantage of the matchup."

Burks had six catches for 167 yards, the second-highest total of his career behind 206 yards on 10 catches at Missouri last season. The junior from Warren has six career 100-yard receiving games.

The Razorbacks had offensive linemen ailing heading into the Texas A&M game and skill players hurting coming out of it. Ace receiver Treylon Burks did not return after coming out in the fourth quarter with a significant limp. Burks wore a medical boot on his right foot in his interview session after the game and said, "Honestly, just a little ... slight little injury, but I'm fine. I'm going to be all right, come back ready for Georgia."

Quarterback KJ Jefferson stayed in the game for a few plays after taking a hit to the top of his knee on a violent shove by Aaron Hansford on the sideline on the first play of the second half. Jefferson went into the medical tent for a while and rode a stationary bike for a time during Malik Hornsby's three series.

Jefferson re-entered with 7:04 left in the game with the Razorbacks backed up to their 11-yard line after having an numbing ointment applied to his knee.

Freshman kicker Cam Little increased his career-opening streak to eight consecutive made field goals and 17 of 17 on PATs.

Little made a 47-yard field goal, which was listed at 46 yards in the official stats, to cap the Razorbacks' first drive, and added a critical 24-yarder with 8:39 left in the game to give Arkansas a 20-10 lead.

Pittman left unsaid what he wouldn't say, but it might have had something to do with Little not having any misses on the season.

Arkansas Coach Sam Pittman was not asked about the Hogs' failed fourth-and-1 play from the Texas A&M 22 late in the first half, but he brought it up himself anyway.

The fourth-down stop of Trelon Smith, with end Aaron Hansford knifing in to make the tackle, led to the Aggies' only scoring drive of the first half. Seth Small made a 49-yard field goal with 21 seconds left before halftime to cut Arkansas' lead to 17-3.

"Before anybody asks me, I would have went for that fourth and 1 again," Pittman said. "I thought at that point we could get ahead of them at 24-0 at half, and I thought we would deflate them.

Arkansas tailback Trelon Smith surpassed the 1,000-yard milestone as a Razorback with his 82 rushing yards on 17 carries.

The Razorbacks played their second consecutive turnover-free game and extended their streak of quarters without a turnover to nine.

The last Arkansas turnover came on Texas safety B.J. Foster's interception against KJ Jefferson in the third quarter of the Hogs' 40-21 win on Sept. 11.

Arkansas has not lost a fumble this season. The Razorbacks' Myron Cunningham recovered a mixed-up mesh with Malik Hornsby at quarterback that would have resulted in huge lost yardage in the third quarter, but the play was nullified due to defensive offsides.

The Razorbacks won the turnover margin for the second time to go along with two ties. Arkansas has a 5-2 edge in takeaways, an average of plus 0.75 per game.

The Razorbacks got off to a good start on a critical stretch of games with the victory over No. 7 Texas A&M.

Arkansas' games against then-No. 7 Texas A&M, at No. 2 Georgia and at No. 12 Ole Miss was rated the hardest three-game stretch for any FBS team this season by ESPN's Football Power Index.

"You know, those two guys are amazing QBs," Leal said. "I say they have good speed. As QBs, you don't really see that speed as much. So props to those guys for coming out and balling."

The junior from Warren had his second game 100-yard game in a row with 167 yards on six catches, including an 85-yard touchdown. Burks also had a 14-yard run that set up a fourth quarter field goal.

The graduate transfer from Missouri had his best game yet as a Razorback with 4 tackles, 2 sacks and 3 holding calls drawn. The Aggies used multiple players at left tackle but Williams worked them all.