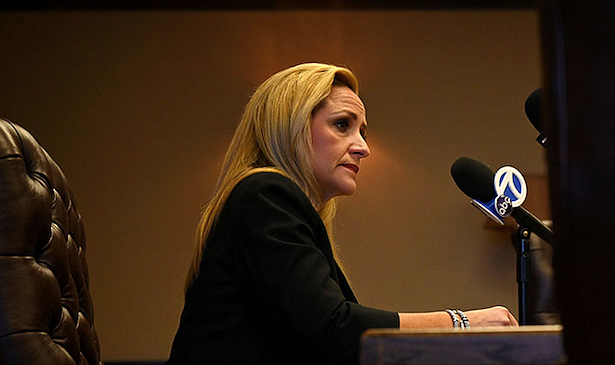 Arkansas Attorney General Leslie Rutledge announces her office's lawsuit against Walgreens for their part in the opioid crisis in Arkansas during a press conference on Monday, March 15, 2021. Rutdledge accused the company of failing to properly monitor prescriptions coming through their Arkansas locations in order to alert the authorities of suspicious activity. (Arkansas Democrat-Gazette/Stephen Swofford)

Attorney General Leslie Rutledge has abandoned changes she implemented in July 2020 to remove her name, image and voice from her office's television ads, by airing a commercial that started in mid-August on covid-19 vaccines.

The Republican attorney general and five office staff members appear in the ad and say they have been vaccinated against covid-19. Rutledge urges people to get the facts about the vaccine.

In the ad, she says she is tired of masks, but also sick of going to funerals.

"No one should be forced to get the shot. It's about personal responsibility."

More than a year ago, Rutledge had changed her office's ads to remove her name, image and voice to ensure that "the unfounded concerns of her political opponents" wouldn't stop her from carrying out the office's duties, Rutledge spokeswoman Amanda Priest said at that time. Priest declined to specify to whom she was referring as Rutledge's political opponents.

On July 1, 2020, Rutledge announced her bid for the Republican nomination for governor in 2022 and said her office's ads were "absolutely not" aimed at promoting her for the higher office.

Sarah Huckabee Sanders is the other announced Republican gubernatorial candidate. Sanders is the daughter of former Gov. Mike Huckabee and a former White House press secretary for then-President Donald Trump.

Asked what led to the reversal in the use of Rutledge's name, image and voice in the office's vaccine ad, Priest said Friday that Rutledge is a statewide leader who has played a pivotal role in almost every important issue facing Arkansas over the last seven years.

"In the last month alone, she has spoken at two funerals and attended several others of individuals who passed away from Covid and had not been vaccinated," she said in a written statement.

Priest said Rutledge personally wrote the public service announcement to include language assuring Arkansans that getting vaccinated is a personal choice that should not be mandated, adding that Arkansans should consult their doctor and not Google on whether to get the shot.

"The statement in the [public service announcement] that 'over 90% of Arkansans who have died from COVID did not get the shot' stems directly from data from the Arkansas Department of Health taken since the vaccine has been available in 2021," Priest said in the statement.

In comparing the period between January to July 2020 when Rutledge was the face of the office's public service announcements with the same period in 2021 when she wasn't, the office received nearly 20,000 more consumer calls and emails -- a 41% higher response -- when Rutledge was prominently featured in the ads, Priest noted.

She said the covid-19 vaccine ad began airing on television and radio stations statewide Aug. 16. It's the only public service announcement the office has aired since then.

Asked how long Rutledge plans to air the covid-19 vaccine ad, Priest said, "We are reviewing the great need as evidenced by the response and will plan accordingly."

Rep. Mark Berry, R-Ozark, said in an interview that Rutledge "really debated on whether or not to do that because of the potential controversy.

"She came very close to not doing it, but in her heart she felt that it was the right thing to do as a leader to encourage people to be personally responsible and really strongly consider getting the shot," said Berry, who is chairman of Rutledge's gubernatorial campaign.

He said he watches Shreveport television stations at home in Texarkana, "so I don't see that stuff."

Priest said the public service announcement has been airing on Shreveport-based network television stations as well as cable stations such as Fox News and CNN and is airing throughout the state of Arkansas.

State Rep. Jim Dotson, R-Bentonville, said he noticed the vaccine ad but didn't check into it.

State Rep. Vivian Flowers, D-Pine Bluff, said the ad is both good and appropriate and she compared it to the state Department of Health's ads.

She noted, "Clearly, we are very different in our ideology on a lot of things, myself and Attorney General Rutledge." She said she supports Democratic gubernatorial candidate Chris Jones of Little Rock.

But Flowers said, "This is about the fact that we are a state with terrible numbers with regard to infections, deaths, hospitalizations and our vaccination rate and, if what they are doing can help, then I'm all for it."

So far in fiscal 2022 that started July 1, the attorney general's office has spent $1.3 million on radio and television advertising, Priest said.

She said she doesn't have a way to determine how much of that spending is for the covid-19 ad.

In fiscal 2020, the office spent $2.2 million on radio and television ads.

Rutledge and her aides have said the coronavirus pandemic, which was first verified in Arkansas in March 2020, led the office to increase its ad spending to bolster its outreach efforts.

Before fiscal 2020, the largest amount that office spent on such ads since at least fiscal 2008 was $459,200 in fiscal 2014 when Democrat Dustin McDaniel was attorney general. Fiscal 2014 started in July 2013; McDaniel withdrew from the governor's race in the middle of the previous fiscal year, in January 2013.

The office's advertising expenses are paid out of its consumer education and enforcement fund, which is funded by money from lawsuits won by the office.

Sen. Kim Hammer, R-Benton, said in an interview, "We have been so busy with all of the other legislative activity with the sessions, this hasn't got the attention maybe that it needs to get."

Ad spending in Rutledge's office led to the enactment of Act 1043 of 2021 -- sponsored by Hammer in this year's regular session -- that requires certain disclosures on publicly funded ads using an image or voice of an elected official.

Under Act 1043, all articles, statements or communications using the image or voice of an elected official appearing in any radio, television, or other electronic medium for the publication of which a consideration is paid or to be paid by federal, state or county funds, shall clearly contain the words paid advertisement, paid ad, paid for by, sponsored by or furnished by and the name of the state entity, county or constitutional office that paid for the ad.

Hammer said state lawmakers likely "will be looking in the future to put some caps and limitations" on ad spending by the attorney general's office and potentially require legislative review after ad spending hits a certain threshold.

"Probably what we are going to have to do in the future is to look at what constitutes good use of that money and does it really fall under the purview of the attorney general's office to be promoting things like encouragement of vaccination," he said.

In a July 25 guest column in the Arkansas Democrat-Gazette, Sanders encouraged people to get vaccinated against covid-19.