But authorities expect to see rising demand for vaccines by Compiled Democrat-Gazette Staff From Wire Reports | September 27, 2021 at 7:07 a.m. 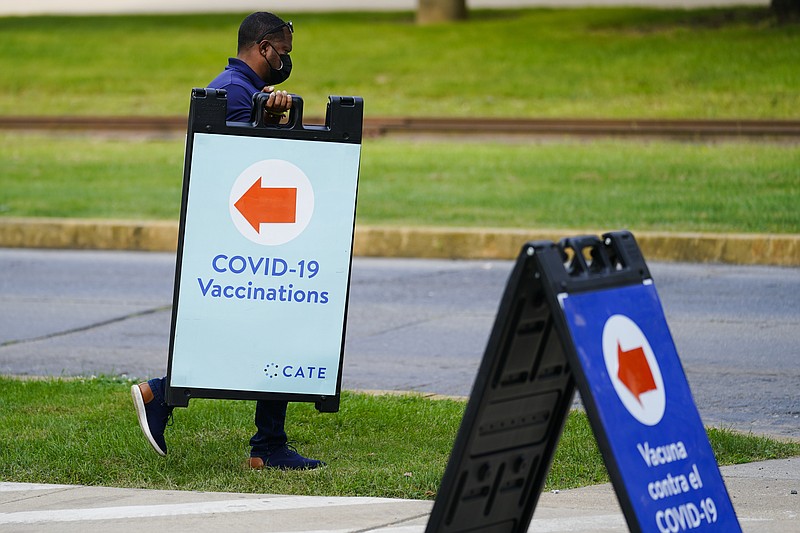 FILE - In this Sept. 14, 2021, file photo, a worker posts placard for a COVID-19 vaccination clinic at the Reading Area Community College in Reading, Pa. With more than 40 million doses of coronavirus vaccines available, U.S. health authorities said they're confident both seniors and other vulnerable Americans seeking booster shots and parents anticipating approval of initial shots for young children will have easy access. (AP Photo/Matt Rourke, File)

WASHINGTON -- The head of the U.S. Centers for Disease Control and Prevention warned Sunday that parts of the U.S. health system "are in dire straits" as the spread of the covid-19 delta variant forces some states to prepare for rationed medical care.

Idaho, among the U.S.' least-vaccinated states, and Alaska have said that hospitals can begin to ration medical care if needed.

A major hospital in Montana also implemented so-called crisis of care standards to prioritize who is treated. Health officials warned that the measure could be widened across the state.

[Video not showing up above? Click here to watch » arkansasonline.com/927walensky/]

The delta variant's surge has shifted in intensity around the U.S., now hitting the northwest. Nationwide, the number of people dying in hospitals appears to have peaked, according to U.S. Department of Health and Human Services data.

With more than 40 million doses of coronavirus vaccines available, U.S. health authorities said they're confident there will be enough for qualified older Americans seeking booster shots and for the young children for whom vaccines are expected to be approved in the not-too-distant future.

A spike in demand -- expected after last week's federal recommendation on booster shots -- would be the first significant jump in months. More than 70 million Americans remain unvaccinated despite the enticement of lottery prizes, free food or gifts, and pleas from exhausted health care workers as the average number of deaths per day has climbed to more than 1,900 in recent weeks.

[Video not showing up above? Click here to watch » arkansasonline.com/927bourla/]

Federal and state health authorities said the current supply and the steady production of more doses can easily accommodate those seeking boosters or initial vaccination, avoiding a repeat of the slow rollout of covid-19 vaccines across the country early this year.

"I hope that we have the level of interest in the booster ... that we need more vaccines," Colorado Gov. Jared Polis said last week. "That's simply not where we are today. We have plenty of vaccines."

Robust supply in the U.S. enabled President Joe Biden last week to promise an additional 500 million of Pfizer's covid-19 shots to share with the world, doubling the U.S.' global contribution. Aid groups and health organizations have pushed the U.S. and other countries to improve vaccine access in countries where even the most vulnerable people haven't had shots.

States have faced a challenge as they try to avoid ordering too many doses and letting them go to waste. Several states with low vaccination rates have reported throwing away thousands of expired doses or are struggling to use doses nearing expiration this fall.

Most vaccines can stay on the shelf unopened for months, but once a vial is opened, the clock starts ticking. Vaccines are only usable for six to 12 hours, depending on the manufacturer, according to the U.S. Food and Drug Administration.

State health officials said they have tried to request only what health care providers and pharmacies expect to need from the federal supply.

Those numbers have dwindled since the vaccines became widely available in early spring. But U.S. officials -- holding out hope that some of the unvaccinated will change their minds -- are trying to keep enough vaccine doses in stock so all Americans can get them.

That balancing act is tricky and can lead to distress around the globe as the U.S. sits on unused doses while many countries in places such as Africa can't get enough.

"Somebody sitting in a country with few resources to access vaccines, seeing people in the U.S. able to walk into a pharmacy and get that vaccine and choosing not to, I'm sure that's causing heartache," said Jen Kates, senior vice president and director of global health and HIV policy for the Kaiser Family Foundation.

Dr. Marcus Plescia, chief medical officer of the Association of State and Territorial Health Officials, which represents the public health agencies of all 50 states, the District of Columbia and U.S. territories, said officials anticipate that on-hand doses of covid-19 vaccines and manufacturers' ability to supply more will meet needs across the country.

"I think states have tried to plan as if everybody's going to be offered a booster," he said, suggesting officials will be overprepared for the more narrow recommendations issued by the FDA and the CDC.

U.S. health officials late Thursday endorsed booster shots of the Pfizer vaccine for all Americans 65 and older -- along with tens of millions of younger people who are at higher risk from the coronavirus because of health conditions or their jobs.

Pfizer's CEO said "it's a question of days, not weeks" before the company and German partner BioNTech submit data to U.S. regulators for federal authorization of a covid-19 vaccine for children age 5-11.

That would be an important step toward starting vaccinations for those children, especially with kids now back in school and the delta variant resulting in a big jump in pediatric infections.

Pfizer announced last week that its vaccine works for that age group and that it tested a much lower dose of the vaccine that's already available for anyone 12 and older. The company said that after children age 5 to 11 got their second dose during testing, they developed coronavirus-fighting antibody levels just as strong as teenagers and young adults getting the regular-strength shots.

Pfizer CEO Albert Bourla said Sunday that if the FDA approves the company's application, "we will be ready with our manufacturing to provide this new formulation of the vaccine."

And when it comes to the coronavirus pandemic, he said on ABC's "This Week," "I think we will be able to come back to normal life" within a year.

Bourla said that "we will have vaccines that ... will last at least a year" and that "the most likely scenario, it is annual revaccinations."

California, for example, estimated earlier this month that it would need to administer an extra 63 million doses by the end of 2022 -- if initial shots for children under 12 were approved and boosters were open to everyone.

The state has the lowest transmission rate in the U.S. Nearly 40 million people live in California, and nearly 70% of eligible residents are fully vaccinated.

Dr. Mark Ghaly, California's health secretary, said the state will rely largely on pharmacies and primary care providers to give boosters to senior citizens while some large counties and health care groups will use mass vaccination sites.

In Pennsylvania, more than 67% of residents older than 18 are fully vaccinated. Alison Beam, acting secretary of health, said health authorities now have "two missions": Continuing to persuade people to get vaccinated and serving those eager to receive a booster or initial shots.

"Pennsylvania is going to be prepared," Beam said. "And we're going to have the right level of vaccine and vaccinators to be able to meet that demand."

Meanwhile, a wave of misinformation touting the deworming drug ivermectin as a covid-19 treatment appears to be showing no signs of abating, with calls about the drug to poison control centers surging.

Federal health authorities have repeatedly warned covid-19 patients not to take the drug, which is an anti-parasite medication most commonly used in the United States on livestock and, in smaller doses, to treat head lice on people. But those warnings have done little to curb the drug's popularity in parts of the U.S.

The American Association of Poison Control Centers reported 1,440 cases of ivermectin poisoning this year through Sept. 20, which is more than triple the number during the same period in 2019-20.

A majority of this year's reports came over the summer as people sought prescriptions after false claims about the drug's effectiveness in covid-19 patients started to circulate on social media, podcasts and talk radio.

States across the country are reporting a significant number of calls about the drug to poison control centers. Health authorities in Mississippi reported last month that 70% of recent calls were about ivermectin.

New Mexico poison control centers have also seen a sharp increase in calls about the drug -- 24 cases since November, state health authorities said. Fourteen people were hospitalized this year after taking the drug, and two of them died, the state reported Wednesday.

The two who died -- at 38 and 79 years old -- had covid-19 and opted for ivermectin instead of proven treatments like monoclonal antibodies, said Dr. David Scrase, the acting head of the state Health Department. He said the drug had contributed to both deaths, causing kidney failure in one of the patients.

"It's the wrong medicine for something really serious," he said.

Dr. Susan Smolinske, director of the New Mexico Poison and Drug Information Center, said about half of the reported cases of ivermectin poisoning this year involved people who took the drug to prevent covid-19.

While certain versions of ivermectin are prescribed to treat head lice and other parasites for people, other formulations -- which come in forms such as liquid and paste -- are commonly used in the equine and livestock industries to combat worms and parasites.

Smolinske said misuse of the drug can cause drowsiness, dizziness, tremors or even a coma. "It gets into the brain, and if you take a high enough dose, it has difficulty getting out of the brain," she said.

Information for this article was contributed by Ian Fisher of Bloomberg News; by Todd Richmond, Kathleen Foody, Scott Bauer and Patty Nieberg of The Associated Press; and by Alyssa Lukpat of The New York Times. 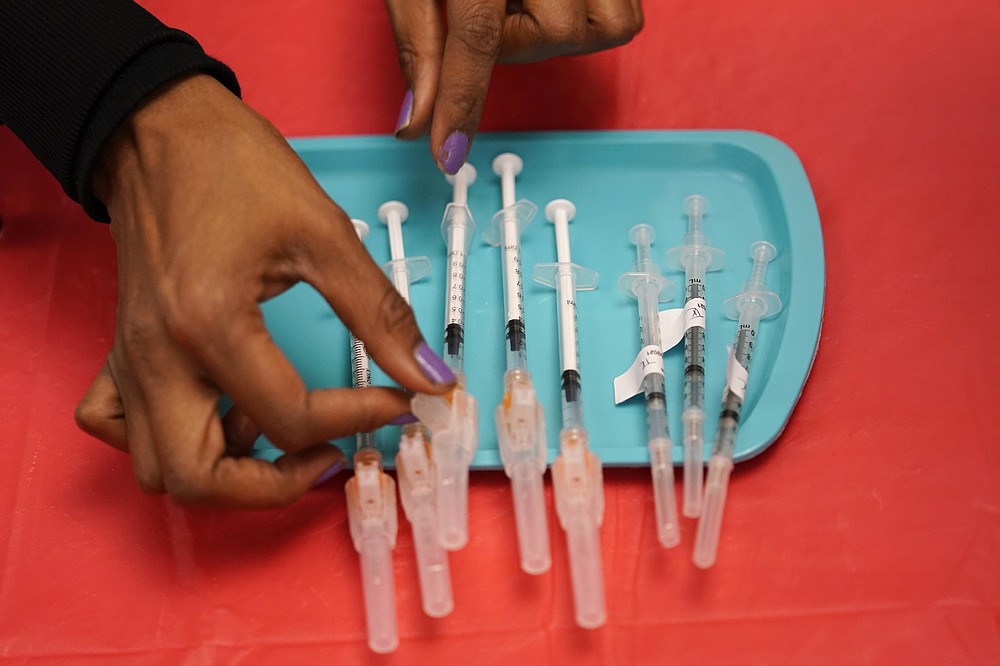 FILE - In this Jan. 22, 2021, file photo, a certified medical assistant prepares doses of the Pfizer COVID-19 vaccine at a vaccination center at the University of Nevada, Las Vegas. With more than 40 million doses of coronavirus vaccines available, U.S. health authorities said they're confident both seniors and other vulnerable Americans seeking booster shots and parents anticipating approval of initial shots for young children will have easy access. (AP Photo/John Locher, File) 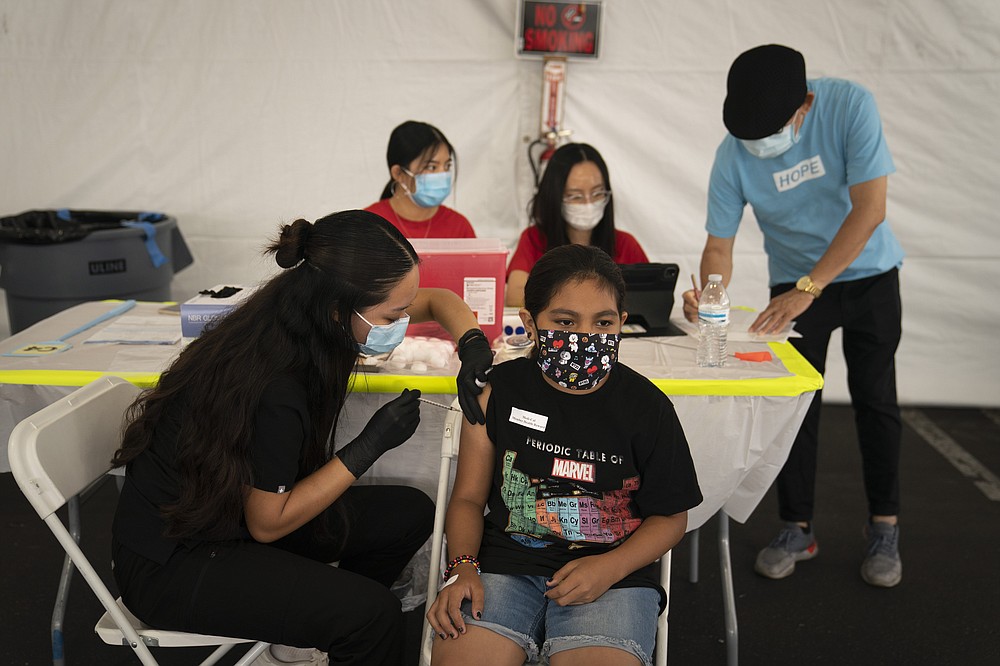 FILE - In this Aug. 28, 2021, file photo, Mayra Navarrete, 13, receives the Pfizer COVID-19 vaccine from registered nurse, Noleen Nobleza at a clinic set up in the parking lot of CalOptima in Orange, Calif. With more than 40 million doses of coronavirus vaccines available, U.S. health authorities said they're confident both seniors and other vulnerable Americans seeking booster shots and parents anticipating approval of initial shots for young children will have easy access. (AP Photo/Jae C. Hong, File)