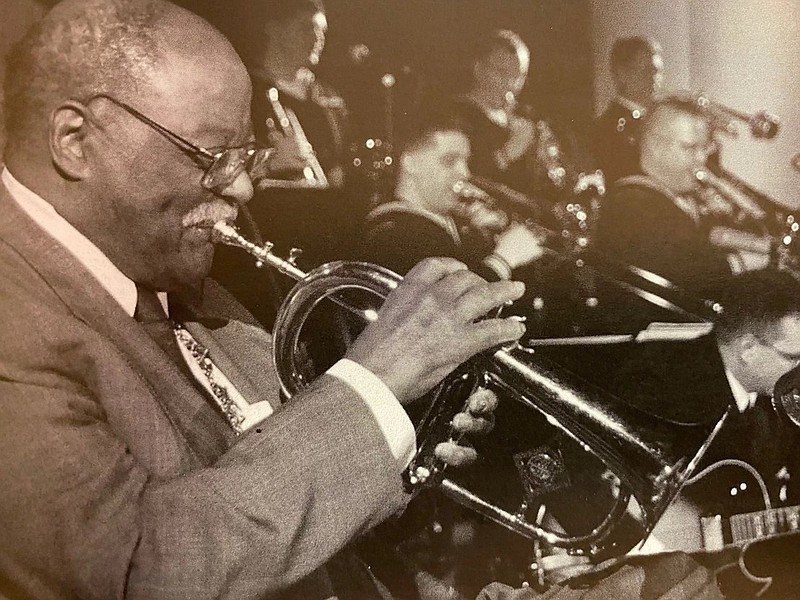 Clark Terry was one of the most recorded musicians in the history of jazz. He performed for eight U.S. presidents and served as a jazz ambassador for State Department tours in the Middle East and Africa, according to Encyclopedia of Arkansas. (Special to The Commercial/Explore Pine Bluff.com, U.S. Navy)

As a Grammy Lifetime Achievement recipient and one of the five most-recorded jazz musicians ever, Clark Terry is considered a legend with a Pine Bluff connection.

He spent a decade with The Tonight Show Band (from 1962 to 1972) and was the orchestra's first black member. He performed for eight U.S. presidents.

Terry and his wife, Gwen, moved to Pine Bluff in 2006, in his senior years. He taught jazz at the University of Arkansas Pine Bluff, inspired local jazz festivals bearing his name and mentored musicians from all over the world at his Pine Bluff home.

The 2014 documentary Keep on Keepin On, about Terry's mentoring of blind music prodigy Justin Kaughlin, was filmed, in part, in Pine Bluff. Terry also co-hosted season three of the online children's show OBKB, taped in 2010 before a live audience in Pine Bluff.

During African American Music Appreciation Month last year, Explore Pine Bluff paid homage to the well-known musician who would have been 101 years old this year.

Terry was an American swing and bebop trumpeter, a pioneer of the flugelhorn in jazz, a composer, educator, and a mentor.

During his heyday as a musician, Terry was everywhere. As a band leader, studio musician and accompanist, he was in such constant demand that he joked of needing a suitcase just to cart around his W-2 tax forms. He played with Charlie Barnet, Sarah Vaughn, Count Basie, Duke Ellington, Quincy Jones, and Oscar Peterson.

Terry's broad exposure and recognition from the TV work helped launch a new career as a band leader and personality in his own right and led to his work in the 1970s as a "jazz ambassador" for State Department-sponsored tours in the Middle East, Africa and South Asia.

All totaled, Terry's career in jazz spanned more than 70 years, during which he became one of the most recorded jazz musicians, appearing on more than 900 recordings. He also mentored dozens of musicians who would go on to become household names, including Quincy Jones, Miles Davis, Herbie Hancock, Wynton Marsalis, Pat Metheny, Dianne Reeves and Terri Lyne Carrington.

For a real treat, open your favorite music app and do a quick search on Clark Terry. You'll find hundreds and hundreds of inspired recordings. Sit back, listen, and enjoy.

Clark Terry was one of the most recorded musicians in the history of jazz and performed for eight U.S. presidents and served as a jazz ambassador for State Department tours in the Middle East and Africa.

This article is among features at ExplorePineBluff.com, a program of the Pine Bluff Advertising and Promotion Commission. Sources: Encyclopedia of Arkansas, Images of America, Delta Music and Film: Jefferson County and the Lowlands, by Jimmy Cunningham Jr. and Donna Cunningham. Image Credit: U.S. Navy.