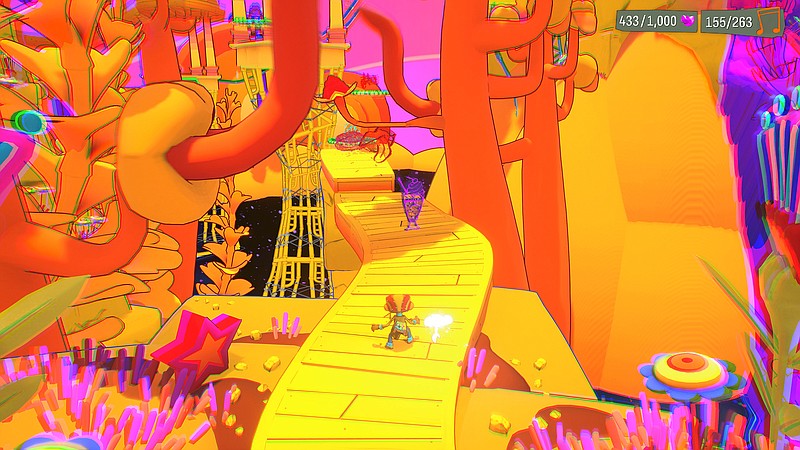 If you had watched me play my way through "Psychonauts 2" you would have heard me spout things along the lines of: "This is bonkers!," "no way!" and "what?!" Accompanying these extremely articulate ravings was a thought I found repeatedly spinning around my head: There is something exhausting about true masterpieces.

"Psychonauts 2" is the sequel to one of the most critically lauded games to have graced the original Xbox and the PlayStation 2. 2005's "Psychonauts" introduced players to Razputin "Raz" Aquato, the scion of a troupe of circus performers who runs away from his family to join an international spy ring made up of psychics — otherwise known as the Psychonauts.

Raz has the ability to dive into people's minds and explore the mental constructs that shape their worldviews.

In "Psychonauts 2," he is out to uncover a mole in the Psychonauts' organization. Also, he has to stave off a threat from the group's nemesis, Maligula, a woman long believed to be deceased whose relationship to the organization constitutes one of the story's key mysteries.

Raz's journey takes him into the minds of the founders of the Psychonauts, most of whom bear psychic wounds from their encounters with Maligula.

I don't remember precisely when it dawned on me that "Psychonauts 2" is one of the best comedic adventure games I've played. I know it began to get under my skin when, early on, I sent Raz teleporting between the thoughts of a woman (using his "mental connection" ability) to rewire concepts in her brain so as to change her cautious demeanor.

Teleporting in most games is simply a means to an end, a convenient way to dash from point to point and nothing more. But, as with so much of "Psychonauts 2," the mechanics serve to strengthen the narrative backbone of the game.

The same holds true for the adversaries that Raz encounters. They personify different mental obstacles such as "bad thoughts" and "judges." Bad thoughts are critters that run around and try to explode in your face, and judges are bewigged men who wield threatening gavels.

Thematic consistency makes "Psychonauts 2" especially engaging, and though Raz has plenty of occasion to simply run around and bash enemies, the game abounds with idiosyncratic details.

Raz's repertoire of special abilities runs the gamut from the rather parochial to more imaginative skills the developers play up well. Less amazing powers include pyrokinesis — setting fires with his mind — and marksmanship, also known as PSI-Blast or Blastokinesis, shooting a deadly beam of energy from his head. But then there is clairvoyance, which permits Raz to enter the minds of others and see himself from their perspective. This leads to some droll sights as some people see him in a most unflattering light. I fell over laughing when one of his acquaintances sees him as a rat.

Projection is another interesting skill that is acquired toward the end of the game, giving Raz the power to conjure a two-dimensional version of himself that can be sent past gates and other obstacles to smooth the way forward.

The exploration of different minds leads to wildly different encounters. "Psychonauts 2" is a game that frequently changes up its gameplay so that one moment Raz is jogging with a bowling ball down the streets of a city that's designed around bowling, and another he is on a cooking show pulling sentient ingredients from the audience to cook them. Later, he is a doodle running through the pages of a notebook.

So different are these environments, I found myself at the start of each new level eagerly anticipating what novelty might be around the corner.

From its story line and level design to its combat encounters, "Psychonauts 2" displays a remarkable level of craft. Its constant barrage of gameplay concepts kept me in a state of suspense, and while I loved every turn, by the end I needed to take a step back.

As a close friend of mine texted me, it's like a playable Tim Burton movie. Its imaginative reach leaves most other lighthearted adventure games far behind.