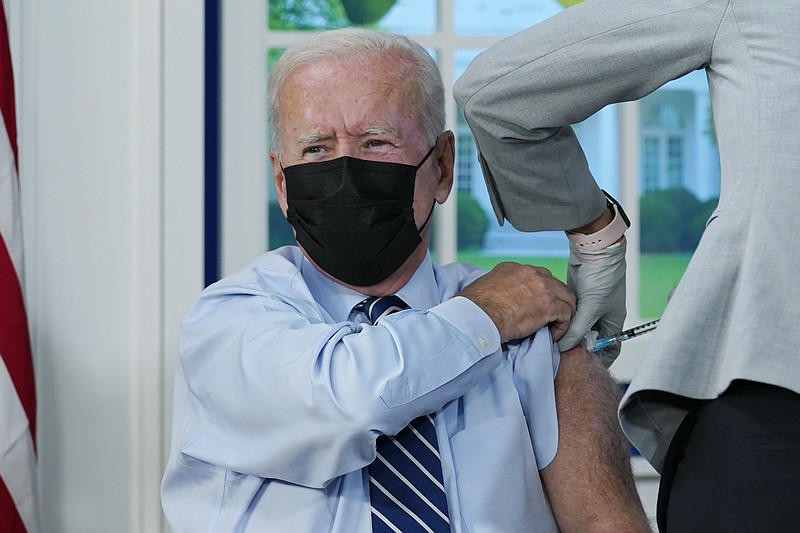 WASHINGTON -- Joe Biden and Mitch McConnell got covid-19 booster shots Monday, with the Democratic president and the Republican Senate leader urging Americans across the political spectrum to get vaccinated and to get the extra dose of protection when eligible.

The Pfizer-BioNTech shots, administered just hours apart on either end of Pennsylvania Avenue, came on the first workday after the Centers for Disease Control and Prevention and the Food and Drug Administration recommended a third dose for Americans 65 and older and approved them for others with medical conditions and high-risk work environments.

Both leaders said that even though the booster shot provides more enduring protection against the virus, it isn't the silver bullet to ending the pandemic.

"Let me be clear," Biden said. "Boosters are important. But the most important thing we need to do is get more people vaccinated. The vast majority of Americans are doing the right thing."

White House press secretary Jen Psaki said the 78-year-old president had gotten his booster shot on camera "to make clear it's safe, it's effective, it's something you should do if you're in one of these categories."

[Video not showing up above? Click here to watch » https://www.youtube.com/watch?v=rIOK-IcDS8E]

McConnell, 79, of Kentucky said on the Senate floor that getting another shot was "an easy decision," particularly as a survivor of polio.

"Like I've been saying for months, these safe and effective vaccines are the way to defend ourselves and our families from this terrible virus," McConnell said.

First lady Jill Biden, who is 70, got a booster dose in private at the White House on Monday, said her spokesperson, Michael LaRosa.

Vice President Kamala Harris, 56, received the Moderna vaccine, for which federal regulators have not yet authorized boosters -- but they are expected to do so in the coming weeks. Regulators are also expecting data soon about the safety and efficacy of a booster for the single-dose Johnson & Johnson shot.

At least 2.66 million Americans have received boosters of the Pfizer vaccine since mid-August, according to the CDC.

Joe Biden added to the air of nonchalance around the booster by answering reporters' questions -- about critiques of vaccine policy, infrastructure negotiations and other topics -- while getting injected.

World Health Organization officials have called for a global moratorium on booster shot programs until the end of the year, describing them as an unequal and ineffective use of the limited pool of available vaccine doses. Asked about the criticism, Biden reiterated that the United States had provided more vaccine doses to the global effort than all other countries combined and would continue to do more.

Biden said about 23% of adult Americans had not received a single dose of vaccine and that they were causing "an awful lot of damage for the rest of the country."

Asked what vaccination percentage would get things back to normal, Biden said he was not a scientist but that so many people "can't go unvaccinated and us not continue to have a problem."

He said he was moving forward with vaccination requirements where he could impose them and that he planned to travel to Chicago on Wednesday to talk about businesses implementing their own vaccination mandates.

Meanwhile, a federal appeals panel decided Monday that the New York City school district, the nation's largest, can immediately impose a vaccination mandate on its teachers and other workers.

The three-judge panel of the 2nd U.S. Circuit Court of Appeals in Manhattan issued a brief order late in the day that lifted a block that a single appeals judge had put in place Friday.

After a ruling from a Brooklyn judge, a group of teachers had brought the case to the appeals court, which assigned a three-judge panel to hear oral arguments Wednesday. But the appeals panel issued its order Monday after written arguments were submitted by both sides.

Mayor Bill de Blasio announced in August that about 148,000 school employees would have to get at least a first dose by Monday. The policy covers teachers and staffers including custodians and cafeteria workers.

As of Friday, 82% of district employees had been vaccinated, including 88% of teachers.

But lawyers for teachers argued Monday in papers submitted to the 2nd Circuit that teachers who are placed on unpaid leave because they have not complied with the order would be irreparably harmed if the appeals court failed to block the mandate.

The lawyers wrote that the city's order will "leave teachers and paraprofessionals without the resources to pay rent, utilities, and other essentials. The harm is imminent."

On Sunday, the city submitted written arguments to the appeals court, saying the preference by some teachers "to remain unvaccinated while teaching vulnerable schoolchildren is dwarfed by the public's interest in safely resuming full school operations for a million public school students and ensuring that caregivers citywide can send their children to school secure in the knowledge that sound safety protocols are in place."

Some hospitals and nursing homes in New York began removing workers Monday for failing to meet a state-mandated vaccination deadline as Gov. Kathy Hochul pleaded with holdouts to get eleventh-hour inoculations.

It was not clear Monday whether a wave of suspensions and terminations of health care workers who refused be inoculated would cause significant staff shortages around the state. Hochul said workers had until the end of the day to get at least one dose.

"To those who have not yet made that decision, please do the right thing," the governor said at a news briefing. "A lot of your employers are anxious to just give you the jab in the arm and say you're part of the family; we need your help to continue on."

The rules apply not only to people like doctors and nurses, but also to others who work in health care institutions, such as food service workers, administrators and cleaners. Employees who refuse the shots face suspensions and termination. And workers fired because of refusal to be vaccinated are not eligible for unemployment insurance without a doctor-approved request for medical accommodation.

Hochul has held firm on the mandate in the face of multiple lawsuits and pleas to delay it, insisting that the state needs to protect vulnerable patients.

Some holdouts say vaccination should be a personal choice.

"I really got to a point where if I got it, I would be disgusted with myself for being strong-armed into it. Just morally, I feel like it would put me in a bad place of self-loathing," said Jessica Bond, who was a physical therapy assistant at the Brothers of Mercy nursing home in the Buffalo suburb of Clarence.

Her last day was Friday.

Bond, who feared side effects from the shots, said she had worked extra shifts during the pandemic to help fill gaps after a lot of her co-workers quit.

"So it kind of is a kick in the face now to be going through all this, because it's like, well, I was good enough then," said Bond, who was part of an unsuccessful legal challenge to the mandate.

She plans to start a home cleaning business.

The Erie County Medical Center Corp. in Buffalo said about 5% of its hospital workforce had been put on unpaid leave because of the mandate, along with 20% of staffers at its nursing home. The state's largest health care provider, Northwell Health, said about two dozen unvaccinated employees it characterized as leaders were "exited from the system" and that it would begin that process for the rest of the unvaccinated staff.

Noncompliant employees at hospitals run by the State University of New York face "immediate suspension and pending termination" today, according to a memo sent to administrators by Chancellor Jim Malatras.

"If people are not vaccinated, they're not going to get paid for today," said Mitchell Katz, head of New York City's public hospital system. "But we're keeping lines of communication open, and we're hoping that if not today, then by tomorrow people will go and get vaccinated and resume their posts."

Northwell Health said nearly 100% of its workforce was vaccinated. New York City's hospital system reported a 95% rate for nurses and a higher rate for doctors. Albany Medical Center reported that 98% of its staff was vaccinated.

As the vaccination deadline loomed, hospitals and nursing homes came up with contingency plans for staff shortages that included cutting back on noncritical services and limiting admissions at nursing homes. The mandate comes as hospitals are already reeling from staff shortages fueled in part by workers retiring and employees seeking other jobs because of pandemic-related burnout -- or leaving for lucrative nursing jobs traveling from state to state.

Hochul said she will sign an executive order giving her additional power to address staff shortages. She is looking at calling in medically trained National Guard members and retirees, or vaccinated workers from outside the state. The state also will convene an operations center to shift resources to health care facilities with workforce shortages, she said.

Hospitals and nursing homes around the U.S. are bracing for worsening staff shortages as state deadlines arrive for health care workers to get vaccinated.

With ultimatums also taking effect in California, Rhode Island and Connecticut this week, the fear is that some employees will quit or let themselves be fired or suspended rather than get vaccinated.

"How this is going to play out, we don't know. We are concerned about how it will exacerbate an already quite serious staffing problem," said California Hospital Association spokesperson Jan Emerson-Shea, adding that the organization "absolutely" supports the state's vaccination requirement.

About a dozen states have vaccination mandates covering health care workers in hospitals, long-term care facilities or both. Some allow exemptions on medical or religious grounds, but those employees often must submit to regular covid-19 testing.

States that have set such requirements tend to have high vaccination rates. The highest rates are concentrated in the Northeast, the lowest ones in the South and Midwest.

The Biden administration also will require the roughly 17 million workers at health facilities that receive federal Medicare or Medicaid funding to be fully vaccinated under a rule still being developed.

That has worried some hospital officials, particularly in rural communities where vaccination rates tend to be lower.

"We are looking at the need to reallocate staff, in some cases just to maintain services that are essential, and there are going to be some delays" in care, said Troy Bruntz, president and CEO of Community Hospital in McCook, Neb.

He noted that 25 of the hospital's 330 employees said they would definitely resign if they were required to be vaccinated. The remainder of the approximately 100 unvaccinated employees haven't decided.

Bruntz also worries that it will be difficult to hire workers when the hospital is already short-handed.

"It doesn't make us feel too confident that this isn't going to turn into something short of a nightmare for American health care," he said.

At the White House, Psaki said hospitals in Houston and Maine lost a relatively small number of employees after requiring vaccinations.

"We're seeing in a lot of places that this is working, it's effective. It's creating more certainty and protection in their workforces," she said.