China in the grip of power crunch 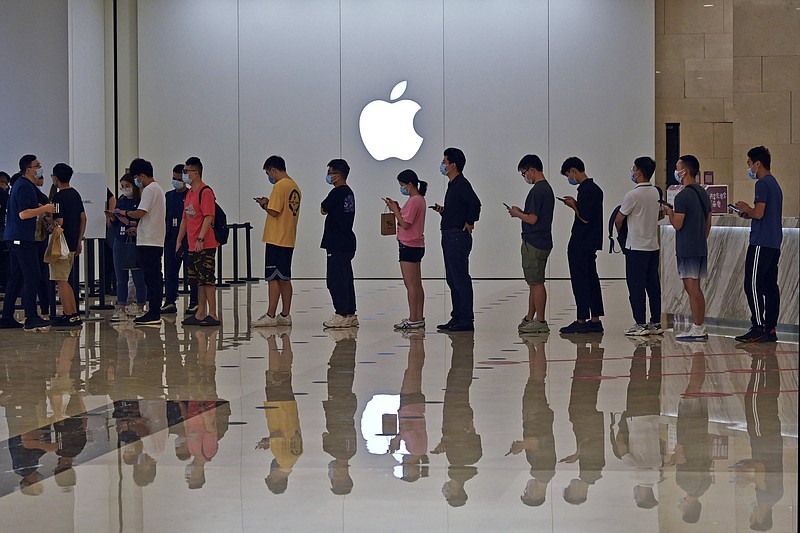 People line up at an Apple Store to buy the latest iPhone 13 handsets in Nanning in south China's Guangxi Zhuang Autonomous Region on Sept. 24, 2021. Global shoppers face possible shortages of smartphones and other goods ahead of Christmas after power cuts to meet government energy use targets forced Chinese factories to shut down and left some households in the dark. (Chinatopix Via AP)

DONGGUAN, China -- Power cuts and even blackouts have slowed or closed factories across China in recent days, adding a new threat to the country's slowing economy and potentially further snarling global supply chains ahead of the Christmas shopping season in the West.

The power failures have rippled across most of eastern China, where the bulk of the population lives and works. Some building managers have turned off elevators. Some municipal pumping stations have shut down, prompting one town to urge residents to store extra water for the next several months, although it later withdrew the advice.

There are several reasons that electricity is suddenly in short supply in much of China. More regions of the world are reopening after pandemic-induced lockdowns, greatly increasing demand for China's electricity-hungry export factories.

Export demand for aluminum, one of the most energy-intensive products, has been strong. Demand has also been robust for steel and cement, central to China's vast construction programs.

As electricity demand has risen, it has also pushed up the price of coal to generate that electricity. But Chinese regulators have not let utilities raise rates enough to cover the rising cost of coal, so the utilities have been slow to operate their power plants for more hours.

In the city of Dongguan, a major manufacturing hub near Hong Kong, a shoe factory that employs 300 workers rented a generator last week for $10,000 a month to ensure that work could continue. Between the rental costs and the diesel fuel for powering it, electricity is now twice as expensive as when the factory was simply on the grid.

"This year is the worst year since we opened the factory nearly 20 years ago," said Jack Tang, the factory's general manager.

Economists predicted that production interruptions at Chinese factories would make it harder for many stores in the West to restock empty shelves and could contribute to inflation in the coming months.

Three publicly traded Taiwanese electronics companies, including two suppliers to Apple and one to Tesla, issued statements Sunday night warning that their factories were among those affected. Apple had no immediate comment, while Tesla did not respond to a request for comment.

It is not clear how long the power crunch will last. Experts in China predicted that officials would compensate by steering electricity away from energy-intensive heavy industries like steel, cement and aluminum, and said that might fix the problem.

State Grid, the government-run power distributor, said in a statement Monday that it would guarantee supplies "and resolutely maintain the bottom line of people's livelihoods, development and safety."

Still, nationwide power shortages have prompted economists to reduce their estimates for China's growth this year. Nomura, a Japanese financial institution, cut its forecast for economic expansion in the last three months of this year to 3%, from 4.4%.

The electricity shortage is starting to make supply-chain problems worse. The sudden restart of the world economy has led to shortages of key components like computer chips and has helped provoke a mix-up in global shipping lines, putting in the wrong places too many containers and the ships that carry them.

Power supplies are little different. Compared with last year, electricity demand is growing this year in China at nearly twice its usual annual pace. Swelling orders for the smartphones, appliances, exercise equipment and other manufactured goods that China's factories churn out has driven the rise.

China's power problems are contributing in some part to higher prices elsewhere, like in Europe. Experts said a surge in prices in China had drawn energy distributors to send ships laden with liquefied natural gas to Chinese ports, leaving others to scurry for further sources.

But the bulk of China's power problems are unique to the country.

Two-thirds of China's electricity comes from burning coal, which Beijing is trying to curb to address climate change. Coal prices have surged along with demand. But because the government keeps electricity prices low, particularly in residential areas, usage by homes and businesses has climbed regardless.

Faced with losing more money with each additional ton of coal they burn, some power plants have closed for maintenance in recent weeks, saying this was needed for safety reasons. Many other power plants have been operating below full capacity and have been leery of increasing generation when that would mean losing more money, said Lin Boqiang, dean of the China Institute for Energy Policy Studies at Xiamen University.

China's main economic planning agency, the National Development and Reform Commission, also ordered 20 large cities and provinces in late August to reduce energy consumption for the rest of the year. The regulators cited a need to make sure that the cities and provinces met full-year targets set by Beijing for their carbon dioxide emissions from the burning of fossil fuels.

Besides coal, hydroelectric dams supply much of the rest of China's power.

China's difficulty in keeping the lights on and the faucets running poses a challenge for Xi Jinping, the country's top leader, and the Chinese Communist Party. They have taken a triumphalist stance this year, emphasizing China's success in quickly eliminating outbreaks of the coronavirus and in winning the release of a senior Huawei executive, Meng Wanzhou, in a dispute with the United States and Canada.

Print Headline: China in the grip of power crunch