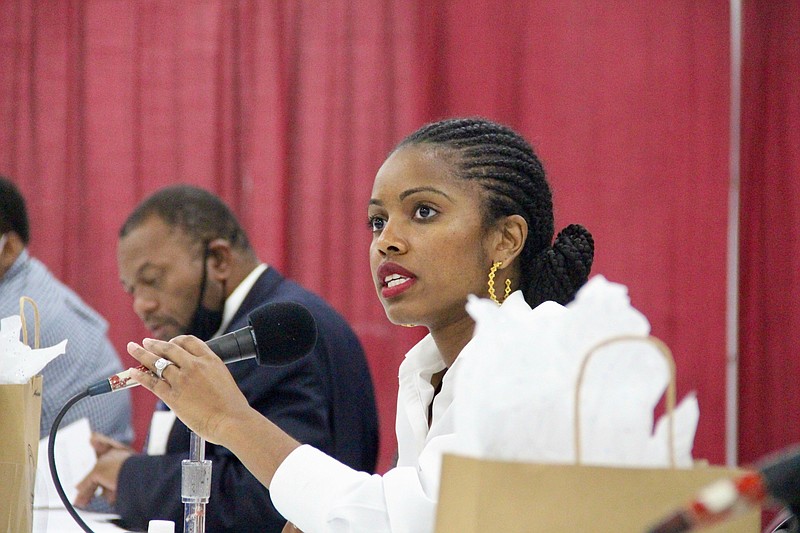 Council member and chairwoman of the Pine Bluff Traffic and Aviation Committee Joni Alexander along with the Drag Strip Ad Hoc Committee will reveal details of a possible drag racetrack in Pine Bluff this Friday at the Pine Bluff Convention Center at 5:30 p.m. (Pine Bluff Commercial/Eplunus Colvin)

After months of researching, plotting and planning, the drag strip committee is ready to reveal details of a possible drag racetrack in Pine Bluff this Friday at 5:30 p.m. at the Pine Bluff Convention Center.

In March, the committee of nine was given the task by council member and chairwoman of the Pine Bluff Traffic and Aviation Committee Joni Alexander to provide the economic benefits of a drag racetrack, find a possible location, establish laws, rules and regulations governing the construction and operation, provide a construction timeline, explain job creation and business development, detail legal obligations, recommend potential stakeholders and investors and present operating costs by February 2022.

Completing the task six months earlier than expected, the committee members said they are excited to share the details of what they are calling an "entertainment park," which, they say, will be suitable for the entire family.

"I was the one who brought this up to alderman (Ivan)Whitfield years ago about having a drag strip in the city," said vice-chairman of the Drag Strip committee Lloyd Cato Jr. "This track, we have been trying to build for decades."

Cato, a 67-year-old Pine Bluff native, who has been racing all of his life, said Alexander really took the initiative and has done a great job in listening to the committee.

"She has really taken the bull by the horns," he said. "She listened to us and took a lot of input from the committee."

Alexander, who admitted she knew nothing about drag racing at first, said she learned everything from the track specs to the direction the track should go in as a result of her involvement. She also visited several race tracks to gain further insight.

In 2019, council member Ivan Whitfield proposed a drag strip to the city council and said he believed it would be workable for Pine Bluff.

Members of a drag-racing association said in a letter in 2019 that they believed the track could boost tax revenue, adding that the area around the city could support drag racing.

Alexander proposed a resolution in 2020 to create a committee to investigate Whitfield's idea. The ad hoc committee was formed earlier this year.

Alexander said this initiative has always been about the citizens.

"It wasn't about me trying to put my views on them," said Alexander. "The people on the committee actually do this. The heart was involved and you could see that in the details."

Alexander was careful not to disclose those details, but she did say the conceptual design of an entertainment park would be located in close proximity to Saracen Casino Resort.

"It will be located headed towards Grider Field Airport aligning with the 530 going north to south," said Alexander. "

Cato described the drag strip as a "theme park," with easy parking for RVs and a bridge to walk over to get to the track.

"It's about 1.5 miles from Walmart and 1.5 miles from the casino," said Cato. "It's going to bring jobs and revenue to this town. This is a great thing and I am so proud."

Another proud committee member was Sandy Thomas, born and raised in Pine Bluff, who said he was the treasurer for the committee.

Thomas has been racing for 25 years and said the need for something constructive in Pine Bluff for all age groups was needed.

"I've seen the impact a drag strip could have on the community, bringing people together, generating revenue and it gives people something to do all across the board," he said. "This town needs something more positive with all the bad things going on."

Thomas said with the closest track located two hours away at Prescott, the track in Pine Bluff will attract people near and far.

In February, over 75 guests, most from out of town, attended a meeting, presided over by Alexander, who said the purpose of the gathering was to introduce the committee members and to discuss the committee's responsibilities.

Just the thought that a track would be in Pine Bluff had racers, including Rep. Mike Holcomb (R-Pine Bluff), in support of the new construction.

According to Cato, who said he is familiar with a lot of racers, said Pine Bluff has 75, Little Rock has 200, Stuttgart has 40, Star City has 15, and Monticello, Woodlawn, Rison, and Sheridan at least have five that he is aware of.

"All of them want this track really bad and will support it," he said.

Believing in the phrase, "If you build it, they will come," committee members are not worried about the attendance the entertainment park will bring.

But what about the funds to build the complex?

"I want to really see this happen for Pine Bluff," said Bradley, who added that, just to clear the land would cost over a million dollars. Bradley said he hopes the financial support needed will be available because the track would bring a positive light to the city and would give him somewhere local to race.

After the public unveiling on Friday, Alexander said she will present the numbers to city and county officials as well as public and private investors who she believes will show interest.

"The money will be there," said Thomas. "You will be surprised how many people want to be a part of this right now."

Linda Brunson, a female motorcycle racer and committee member, said she grew up in a racing family and her husband is a racer.

She said even though there is a small number of female racers in the area, having this entertainment park would draw interest from everyone. She also said this would help remove illegal racing from the city streets and put such activity into a safe and family-friendly atmosphere.

Agreeing with Brunson, Thomas said anyone with a driver's license would be able to participate.

"As long as your car is driveable and not a safety hazard, anybody can go to the track," said Thomas. "Pay your entry fee and you can race your car. There are no criteria. Just have a driver's license and a safe car and you're eligible to race and that's for anybody."

Thomas said their efforts of seeing the plan come to fruition "is like a silver lining in a storm".

"You see so much negativity in the city, but then you see the city pull together and do something that's going to have such an impact," said Thomas, who added that it was vital that the city provide a positive outlet for the youth. "It's not just a drag strip; it's a family park."

Thomas said to have something in the community that's going to draw people instead of having people run away from Pine Bluff is one of the biggest steps that Pine Bluff has made since he has been there.

The entertainment park will have the potential to become one of the biggest entertainment venues in Arkansas for the young and young at heart, committee members said, adding that they hope the community comes out for the unveiling.

"I said a couple of years ago this town will come back," said Cato. "I'm from Pine Bluff and I'm not going leave. A lot of people got nervous and left this town and thought it was going to be nothing. It's something now. It's coming back, and I'm very proud."