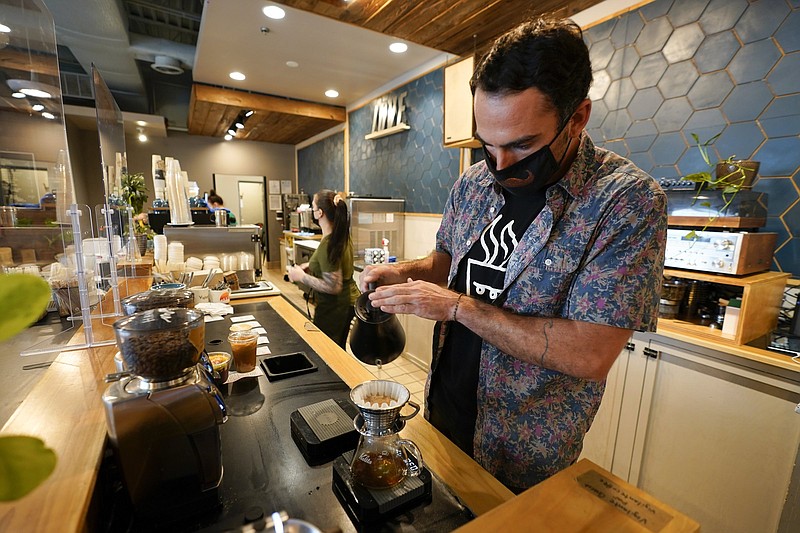 Chris Vigilante makes a dripped coffee for a customer at one of his coffee shops, Wednesday, Sept. 1, 2021, in College Park, Md. A confluence of supply chain problems, drought, frost and inflation all point to the price of your cup of morning coffee going up.

SILVER SPRING, Md. -- As if a cup of coffee wasn't expensive enough, a confluence of factors is driving up farmers' costs to grow the beans and it could begin filtering down to local cafes before the end of the year.

After hovering for years near $1 per pound, coffee futures -- the price large-volume buyers agree to pay for coffee upon delivery months down the road -- doubled in late July, reaching heights not seen since 2014. Though prices have eased a bit, they remain elevated at about $1.90 per pound.

Coffee lovers already paying $8 or more for a bag in the supermarket or up to $5 for a cup may despair over even-higher prices, but a spike in coffee prices on the international futures market doesn't always trickle down to the consumer.

A sustained drought followed by two July frosts blew a hole in Brazil's coffee output, immediately sending wholesale prices for the popular Arabica bean to more than $2 per pound. The frost will significantly affect the 2022-23 harvest, said Carlos Mera, who analyzes the coffee markets at Rabobank.

"This is unprecedented," said Alexis Rubinstein, the managing editor of Coffee & Cocoa for commodities brokerage StoneX Group. "It's never been this perfect storm before. It's usually just been a supply-and-demand scenario.

"We've never been dealing with a supply and demand issue on top of a logistics issue, on top of labor issues, on top of a global pandemic."

While it's difficult to determine the size of the crop loss in Brazil, Mera said estimates vary between 2 million and 6 million fewer bags of coffee. That's about 12% of the output from the world's largest producer of Arabica, the bean used for most coffee sold around the world. Lower supplies almost always mean higher prices.

Grace Wood, an industry analyst for market research firm IBISWorld, said if consumers don't see coffee prices rise by the end of this year, they almost certainly will in 2022, as per capita demand is expected to increase.

"That is just going to contribute to more demand that is going to further disrupt operations and make it more difficult for operators who are already experiencing supply issues," Wood said.

Mera said people who buy coffee beans in the grocery store will likely see a more noticeable increase in prices because about half the cost of that bag on the shelf comes solely from the bean itself. However, in large coffee shops, he added, the cost of the bean only represents about 5% of your cup of hot coffee, so roasters "may not need to carry over the increases right away."

It seems likely, although higher coffee prices on the international future market is not a guarantee that prices at your favorite roaster will go up. The damaged crop in Brazil is still more than a year from harvest, plenty of time for many factors to reverse course.

Rubinstein said higher prices on the international market can often stimulate production -- farmers will have more money to invest in their crop -- and if there's more coffee on the market, prices will retreat. But that will also depend on whether the big roasters have enough beans hoarded to get them through however long prices remain elevated.

Starbucks, the world's biggest coffee retailer, suggested that it won't need to raise its prices because of Brazil's lower output. On a call with investors at the height of the Arabica price spike, the Seattle-based coffee chain's President and Chief Executive Officer Kevin Johnson said his company has 14 months of supply, which he says will get it through 2021 and most of fiscal 2022.

Even smaller, independent specialty roasters sign contracts to buy their beans well in advance, enough so that when shortages like the ones in Brazil happen, it doesn't paralyze them. They also source from countries all around the world, so gaps from one place can often be filled by another.

Chris Vigilante, co-owner of Vigilante Coffee with stores in the Maryland suburbs of Washington, D.C., said most specialty roasters don't buy beans on the same international commodities market with the big players like Nestle and Keurig Dr. Pepper. "So we're not as impacted by (Brazil), but we will feel the pressure of it," Vigilante said.

Vigilante said he pays between $3.50 and $5.50 per pound for most of his beans, which are higher quality and produced by smaller farms. He has no plans to raise prices, but if other small shops raise theirs, he said it's likely because the cost for other essentials have risen.

"I've seen other specialty coffee roasters talking about raising their prices, but I think that's more not because of the cost of coffee, but maybe because the cost of some of our other supplies, like cups and equipment," Vigilante said.

Information for this article was contributed by Marcelo Silva de Sousa of The Associated Press.