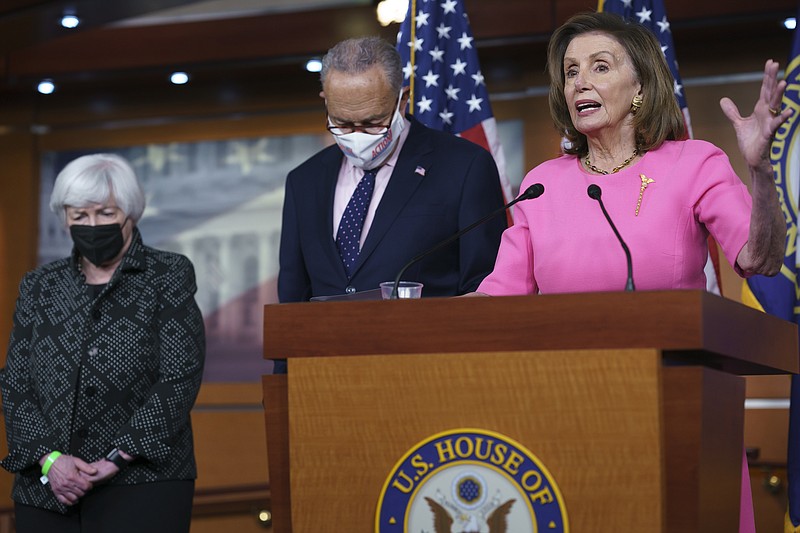 WASHINGTON -- Republican senators Monday night blocked a bill to keep the government operating and allow further federal borrowing, but Democrats aiming to avert a shutdown pledged to try again -- at the same time pressing ahead on President Joe Biden's plans to reshape government.

The efforts are not necessarily linked, but the fiscal year-end deadline to fund the government past Thursday is bumping up against the Democrats' desire to make progress on Biden's $3.5 trillion federal overhaul.

It's all making for a tumultuous moment for Biden and his party, with big consequences.

"You know me, I'm a born optimist," the president told reporters Monday. "We're gonna get it done."

Monday's 50-48 vote against taking up the bill fell well short of the 60 votes needed to proceed over a GOP filibuster. Democratic Majority Leader Charles Schumer of New York switched his vote to "no," a procedural step to allow him to bring the measure back for consideration, which he said would happen this week.

With days to go, Democrats said they will try again before Thursday's deadline to pass a bill funding government operations past Sept. 30, stripping out the debate over the debt limit for another day, closer to a separate October deadline.

The high stakes on Monday prompted Lael Brainard, a Federal Reserve governor, to stress that Congress has no alternative but to take action before the deadline.

"Congress knows what it needs to do. It needs to step up," Brainard said at the annual meeting of the National Association for Business Economics. She added that the "American people have had enough drama" over the past year.

Meanwhile, the real action is unfolding behind the scenes over the $3.5 trillion measure, with Biden and his Democratic allies in Congress seeking a once-in-a-generation reworking of the nation's balance sheets.

[Video not showing up above? Click here to watch » https://www.youtube.com/watch?v=XO6CAkCAlO4]

From free pre-kindergarten and child care subsidies for families with small children to dental care and hearing aids for seniors on Medicare, there's a lot in the president's proposal -- all to be paid for with higher taxes on corporations and the wealthy.

With Republicans solidly opposed, Democrats are rushing to trim the total and win holdouts within their own party.

As the overall price tag comes down, Speaker Nancy Pelosi told House Democrats the president is "working on a number," referring to talks underway with the Senate, according to a person granted anonymity to discuss the late-evening private caucus meeting.

Despite the rush to gather votes, Pelosi said House Democrats would not move ahead on a bill until it is acceptable to their colleagues in the Senate, the person said.

Leaving the caucus meeting, Rep. Richard Neal, D-Mass., the chairman of the Way and Means Committee, said as momentum builds toward Thursday, he was expecting a new total amount: "Let's pop the number."

Building on a separate $1 trillion bipartisan public works package that's already cleared the Senate and is heading for a House vote, also on Thursday, Biden is seeking major spending for health care, education and efforts to tackle climate change. The total price tag, he contends, is actually "zero" -- covered by the expected increase in tax revenue.

He is personally calling fellow Democrats in Congress in an effort to resolve differences and bring his domestic policy vision forward.

Ticking off the weighty list of goals along with meeting the other deadlines, Biden said: "If we do that, the country's going to be in great shape."

But Republicans say it's real spending that can't be afforded, and a reflection of the Democrats' drive to insert government into people's lives.

And so far, the bill is also too big for key Democrats whose votes are needed in the face of the GOP opposition. Two Democratic holdouts, Sens. Joe Manchin of West Virginia and Kyrsten Sinema of Arizona, have said they won't support a bill of that size. Manchin has previously proposed spending $1 trillion to $1.5 trillion.

Progressive lawmakers said they've already compromised enough with more centrist Democrats, but in one potential development, Rep. Pramila Jayapal, D-Wash., the chair of the Congressional Progressive Caucus, confirmed she and Sinema have been in talks.

With all Republicans opposed, Democratic leaders can't spare a single vote in the 50-50 Senate, relying on Vice President Kamala Harris to break a tie to pass the eventual package.

All this comes as the other deadlines swirl to pay for government operations and allow more borrowing or risk a devastating federal shutdown or debt default -- though those dire scenarios appear unlikely.

The bill Senate Republicans rejected Monday night would have funded government operations through early December, while also providing emergency funds for Hurricane Ida and other disaster relief, and for Afghan refugees in the aftermath of the 20-year war.

Republican leader Mitch McConnell of Kentucky rejected that approach because Democrats also included a provision to suspend the debt limit, which would allow continued borrowing to pay off the nation's bills.

Once a routine matter, raising the debt limit is now a political weapon wielded by Republicans to attack Democrats -- even though both parties have been responsible for piling on debt.

"The Democrats will do the responsible thing -- the right thing, the thing that has been done for decades by both parties -- and vote yes," Schumer said ahead of Monday's vote.

He called the Republican opposition "unhinged."

McConnell has said he wants to fund the government and prevent a debt default, but wants to force Democrats to split the package in two and take the politically uncomfortable debt ceiling vote on its their own.

"Republicans are not rooting for a shutdown or a debt-limit breach," he said.

"We will support a clean continuing resolution that will prevent a government shutdown," McConnell said in a speech on the chamber floor. "We will not provide Republican votes for raising the debt limit."

The House began debating the public works bill late Monday, and while it won bipartisan support in the Senate, House Republican leaders are wary of supporting it. Former President Donald Trump, who failed to secure an infrastructure deal, is rallying opposition to this one.

As Pelosi huddled privately with House Democrats on Monday, it was clear she is trying to move as swiftly as possible on Biden's broader package.

While Democrats are largely in agreement on Biden's vision -- many ran their campaigns on the long-standing party priorities -- disputes remain. Among them are splits over which initiatives should be reshaped, including how to push toward cleaner energy or to lower prescription drug costs.

The entire endeavor has frustrated Democrats, recalling for some the brinkmanship over the debt ceiling a decade ago that hammered U.S. markets and spooked investors globally, as the country for the first time risked default. The standoff ended only after Democrats agreed to across-the-board budget cuts and caps that they say decimated federal agencies' ability to provide much-needed health and education programs.

"It is bad for the economy. It is bad during this time we are struggling with a pandemic," Sen. Cory Booker, D-N.J., said during an interview on CNN over the weekend, noting that Republicans added more than $7 trillion to the deficit under Trump. "These are the kinds of things that should be pro forma."

"None of this needs to happen. None of it," Schumer said on the Senate floor Monday. "The only reason we're here ... is because Republicans are making this [default] a possibility by preventing the government from paying its bills."

Information for this article was contributed by Lisa Mascaro, Zeke Miller, Hope Yen, Alan Fram and Kevin Freking of The Associated Press; and by Tony Romm and Rachel Siegel of The Washington Post. 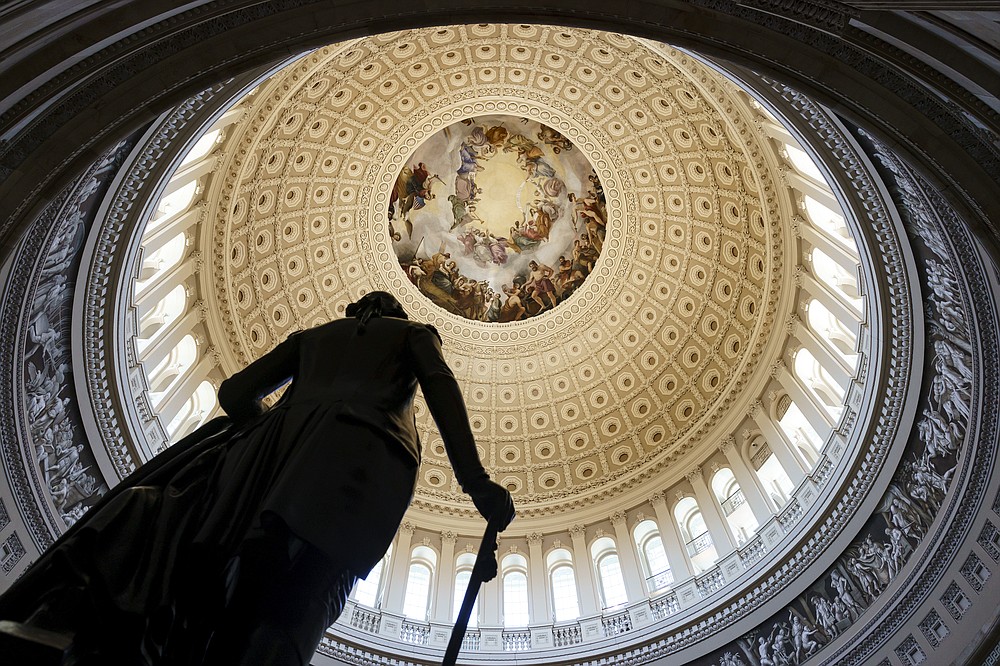 The Rotunda of the U.S. Capitol is seen as a consequential week begins for President Joe Biden's agenda and Democratic leaders in Congress who are trying to advance his $3.5 trillion &quot;Build Back Better&quot; package and pass legislation to avoid a federal shutdown, in Washington, Monday, Sept. 27, 2021. (AP Photo/J. Scott Applewhite) 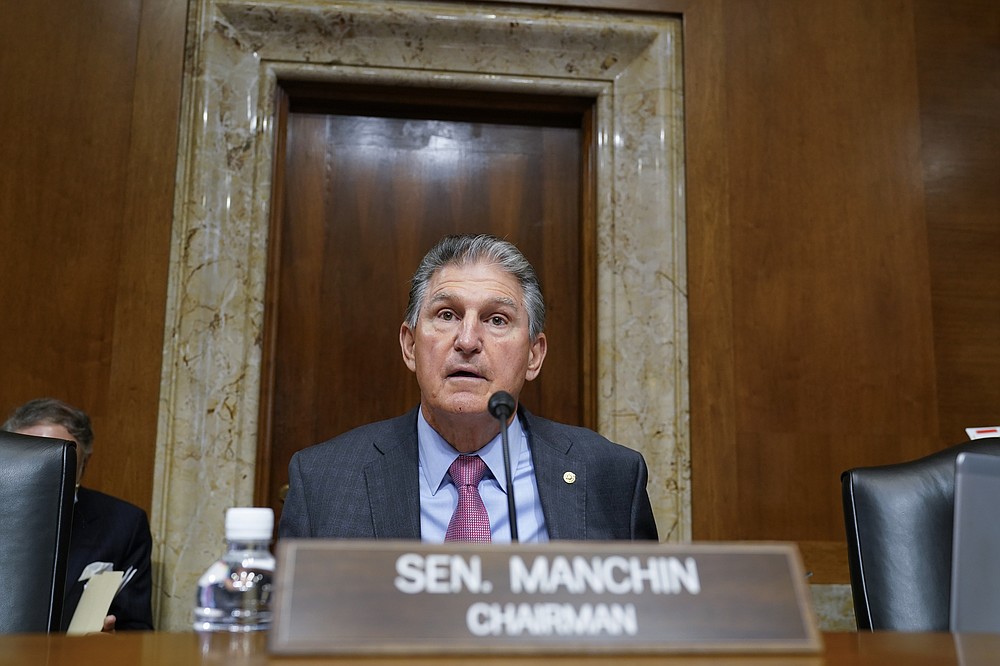 Sen. Joe Manchin, D-W.Va., arrives to chair the Senate Energy and Natural Resources Committee, as congressional Democrats speed ahead this week in pursuit of President Joe Biden's $3.5 trillion plan for social and environmental spending, at the Capitol in Washington, Tuesday, Sept. 21, 2021. Manchin, a Democratic senator vital to the bill's fate, has balked at the price tag. (AP Photo/J. Scott Applewhite) 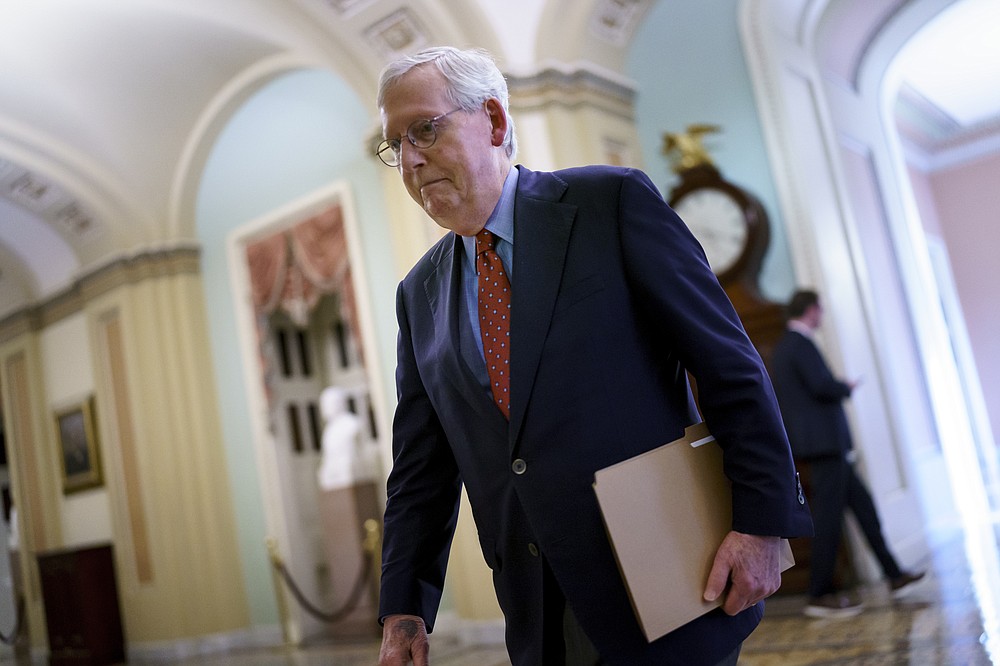 Senate Minority Leader Mitch McConnell, R-Ky., walks to the chamber for a test vote on a government spending bill, at the Capitol in Washington, Monday, Sept. 27, 2021. (AP Photo/J. Scott Applewhite) 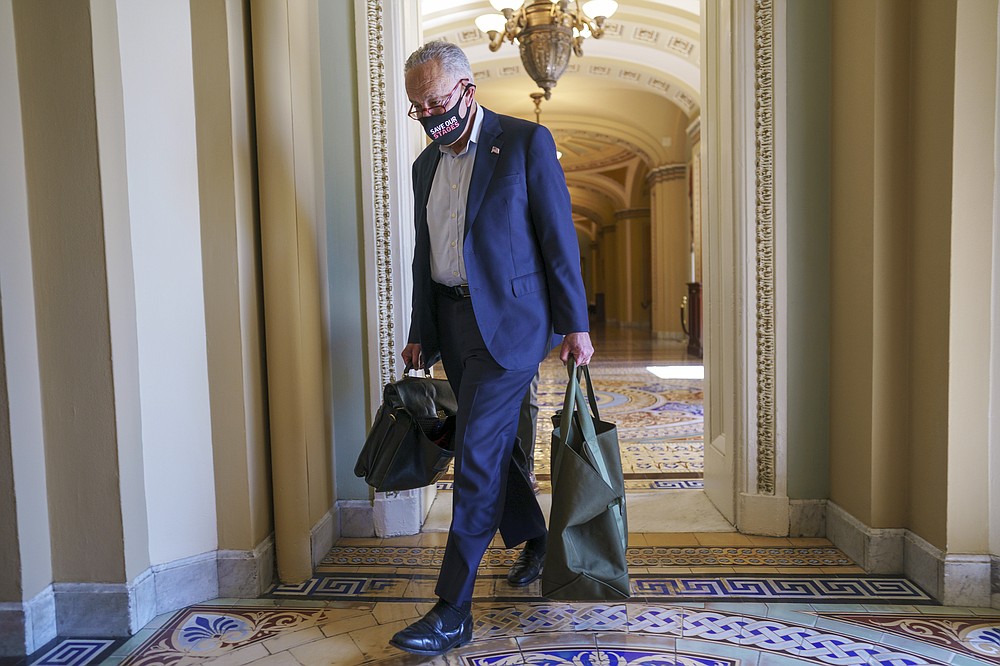 Senate Majority Leader Chuck Schumer, D-N.Y., arrives at the Capitol as a consequential week begins for President Joe Biden's agenda and Democratic leaders in Congress who are trying to advance his $3.5 trillion &quot;Build Back Better&quot; package and pass legislation to avoid a federal shutdown, in Washington, Monday, Sept. 27, 2021. (AP Photo/J. Scott Applewhite) 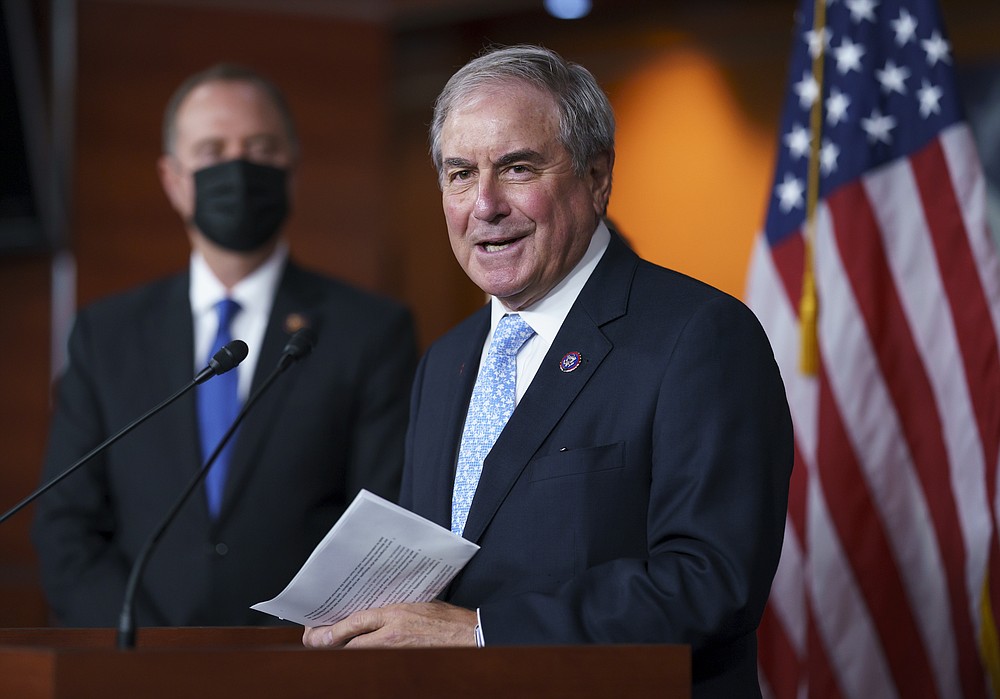