Hogs ready to add to the success story 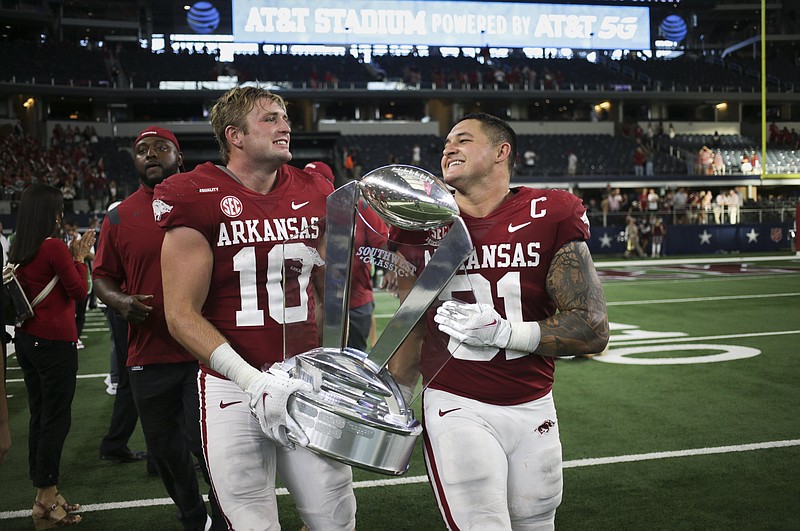 Saturday’s game NO. 8 ARKANSAS AT NO. 2 GEORGIA

FAYETTEVILLE — The University of Arkansas prepared for a big showdown with No. 7 Texas A&M last week with the Earth, Wind & Fire hit “September” echoing through the Walker Pavilion during practice.

The Razorbacks continue writing a success story that no one else in college football can match through the first month of the season. They have accelerated up the rankings, jumping from unranked to No. 8 in the Associated Press poll in the span of three weeks.

“I’m excited to be able to be a part of this group that’s changing the history or changing how the momentum was going in Arkansas football and how we’re starting a new path,” super senior linebacker Grant Morgan said Saturday.

“I’m excited to be in that spot to say to younger guys, ‘This is how you win. This is how you,continue to win.’” Arkansas is also No. 11 in the USA Today coaches poll and No. 10 in the Football Writers Association of America’s Super 16 rankings.

With the victory over the Aggies, the Razorbacks opened what was rated the toughest three-game stretch in all of college football this season by ESPN’s Football Power Index. Next comes what looks like the toughest game in the stretch, at No. 2 Georgia (4-0, 2-0 SEC) on Saturday at 11 a.m. Central.

“Make no mistake about it, this is not the Arkansas that we played last year,” Georgia Coach Kirby Smart said at his Monday news conference.

The Bulldogs opened the covid-19 impacted 2020 season with a 37-10 win at Arkansas in Pittman’s major college head coaching debut against his former boss. The Razorbacks led 7-5 at halftime and 10-5 in the third quarter.

Arkansas opened its preparations for the Georgia game by starting its flex period at the Walker Pavilion on Monday with the Georgia fight song blaring over the speakers.

CBS Sports on Sunday projected the Razorbacks to make a New Year’s Six bowl game, the Sugar Bowl, and face Texas in a rematch.

The odds for Arkansas to make it into the College Football Playoff were astronomical to open the season and dropped to 300 to 1 at BetOn-Line.ag after the Hogs’s 40-21 rout of No. 15 Texas on Sept. 11. They were down even farther, to 70 to 1, on Monday, as determined by the same betting site.

ESPN’s GameDay show will originate from Athens, Ga., for the early kickoff. It will be the sixth appearance by GameDay in what locals call the “Classic City.” The ESPN broadcast crew of Chris Fowler, Kirk Herbstreit and Holly Rowe is the network’s top team.

Smart opened his Monday news conference by encouraging Georgia fans to arrive at Sanford Stadium early and be loud for the GameDay show and the game.

“It won’t be about whether GameDay is here, or how many people are in the stands — that may impact the crowd noise — but at the end of the day, it’s the players on the field that have to play well,” Smart said. “I’m a lot more interested in the prep of that than I am some secret factor.” Pittman said he doesn’t worry about the Razorbacks getting overly caught up in the hype of the first matchup of top 10 teams under his watch.

“You know, I just think we’ve proven for a long time here or since we’ve been here that none of this really affects us,” Pittman said.