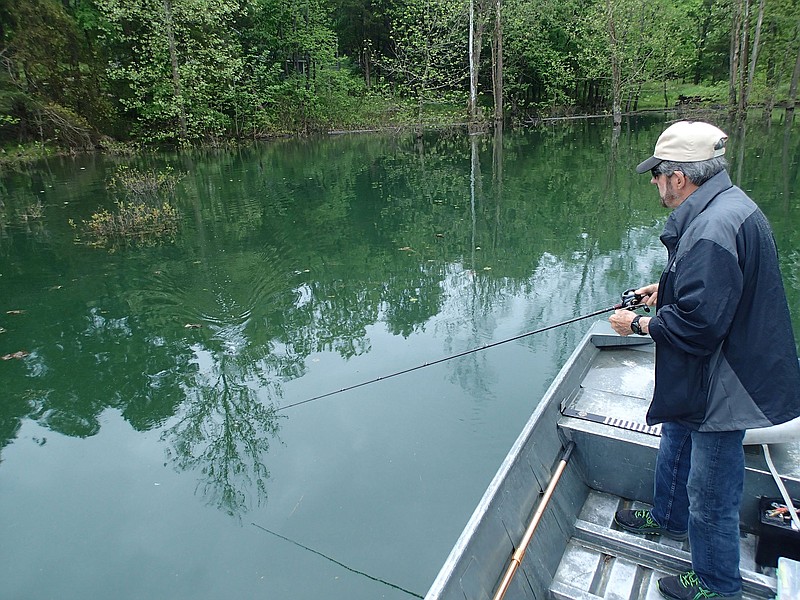 Russ Tonkinson works a buzz bait in May 2021 at Beaver Lake. Buzz baits get bass to bite during spring and summer, but fall is prime time to cast them. (NWA Democrat-Gazette/Flip Putthoff)

Anglers are all abuzz during autumn about a lure that doesn’t look like anything a fish would eat.

No creature in the water has a noisy propeller attached to a piece of wire with threads of plastic around the hook that look like a hula skirt. Yet buzz baits get black bass to bite as water cools beneath a canopy of leaves changing color.

Work a splashing, sputtering buzz bait across the surface at lakes large and small and hang on to that fishing rod. On the region’s streams, smallmouth and largemouth bass attack buzz baits with a vengence during autumn.

Nick Frakes of Rogers is one of the top bass anglers on Beaver Lake. He’ll likely include buzz baits in his arsenal of fish-battling weaponry during fall fishing tournaments.

“I think a buzz bait is one of the best lures you can use for the next month or six weeks,” Frakes said. “The reason is that, this time of year, the lake is more full of bait fish than at any time.”

There are schools of shad, plus the fry of all kinds of fish that hatched in the spring. These forage fish move into more shallow water as the weather cools. Bass follow the bait. About the only part of a buzz bait that looks like food is that hula skirt, if it’s a color that resembles forage.

White imitates the color of threadfin shad that every game fish eats. He prefers small-sized buzz baits because the forage fish in lakes and streams are small.

“The big craze now is for people to take the skirts of their buzz baits and replace it with a top-water frog,” he added. The legs of these soft-plastic frogs sputter, along with a buzz bait’s spinning blade-shaped propeller.

Frakes, who won back-to-back Beaver Lake Elite Series bass tournaments in July and August, heads for stained water when buzz baits get the nod in his fishing. They’re not as effective in clear water, he said. Water is clearest on Beaver Lake near the dam.

But why would a bass bite a noisy lure that would seem to scare fish, not attract them? The late Kings River fishing guide, J.D. Fletcher, summed it up this way.

“It’s like an old dog asleep on the front porch. If you startle that dog it’s liable to bite you,” Fletcher was fond of saying during fall “buzzin’ trips” on the Kings River.

In other words, buzz baits cause a reaction strike. It’s just the nature of aggressive black bass to attack something on the surface that might be food.

Buzz baits are simple to use. Make a cast and start reeling the lure in as soon as it hits the water. Crank it just fast enough to keep it sputtering across the surface.

Two lures that are buzz bait wanna-be’s include the Whopper Plopper and the Jitterbug. A Whopper Plop-per has its spinning propeller at the back of the lure. A wing-like plate on the front of a Jitterbug gives that lure a gurgling back and forth action that can bring wicked strikes.

Both are perfect for people new to fishing. Just cast them out and reel them in. They don’t sink like most buzz baits do if they’re not worked across the water fast enough.

Buzz baits don’t look like fish food. That is, until they’re churning across the surface above a lunker bass eager for a meal.