Guy Bell’s “Covid 19” mural on Capitol Avenue takes a sweeping view of the pandemic. (Special to the Democrat-Gazette/Marcia Schnedler)

New murals of varied styles and subjects keep brightening Little Rock facades. One of the most topical examples completed in the last year or so is titled "Covid 19." It takes a mind-bending view of the persistent pandemic.

Created by Guy Bell, the downtown mural along Capitol Avenue between Main and Louisiana streets deploys disquieting imagery as part of its message. At the right, three men with long poles are battling a covid molecule bigger than they are. A huge tree nearby is falling onto a burning automobile. Flames are seen in the distance, possibly from a forest fire.

At the mural's center, a couple sits on a couch watching a television scene that could be a tornado. There are bars on the window of their room. Farther left, images verge on the surreal. They include what looks like a Polaroid photo of a monkey, a fish with three eyes, and a cartoon balloon with a laugh line spun from the 1980 "Airplane" movie: "What's your vector, Victor?" 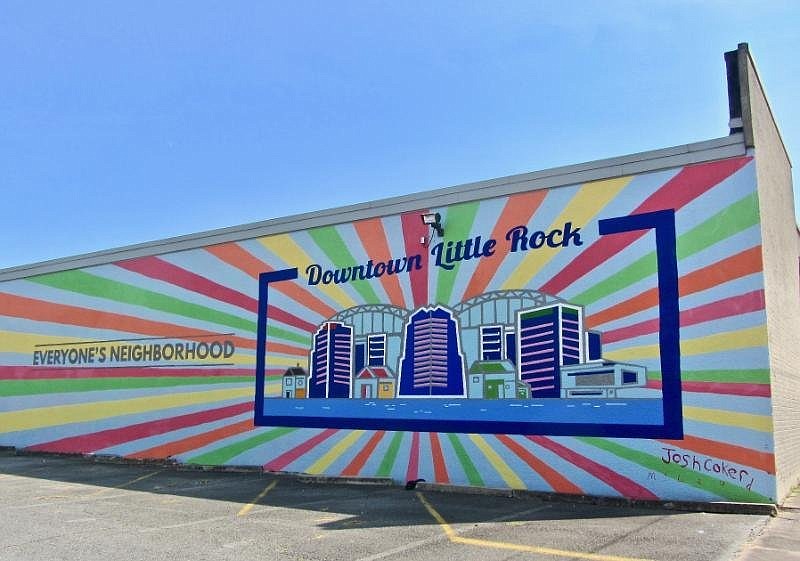 ◼️ A politely upbeat message is conveyed at 321 Scott St. by "Everyone's Neighborhood," a mural dedicated in July under the sponsorship of Downtown Little Rock Partnership. The public art, intended "to celebrate the city's perseverance through the pandemic," stems from a promotional sticker designed last year by Josh Coker.

The image from Coker's sticker was adapted and greatly enlarged by artist Matt McLeod to show Little Rock's skyline with radiating rays of color. McLeod invited volunteers to help him complete the mural in the spirit of community involvement.

◼️ Food is the focus of a collaborative mural, dedicated in May, that occupies Main Street Pocket Park in a patch of land at 711 Main St. tucked between a vacant building and a parking garage. Ten local artists painted their take on the "Eat Local, Eat Often" theme of Ben E. Keith Foods, sponsor of the project with Downtown Little Rock Partnership.

◼️ East of downtown, at 1300 E. Sixth St., the "Men of Iron" mural by Jose Hernandez literally packs a visual punch. A thrusting fist is at the center of his energetic work, described as "a tribute to the people and industry that built our community." 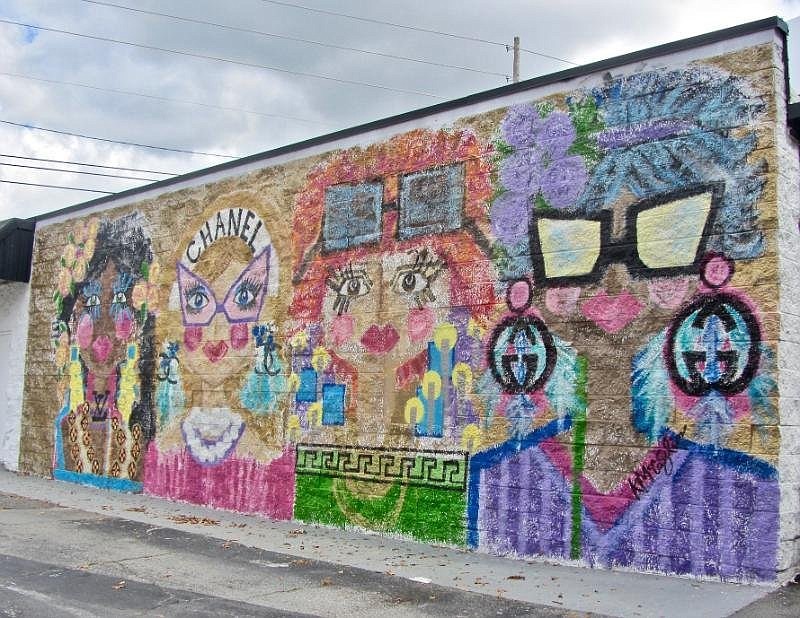 The “Chanel” mural at 7011 Cantrell Road is the work of Kristin McCaslin. (Special to the Democrat-Gazette/Marcia Schnedler)

◼️ West at 7011 Cantrell Road, Fashion Exchange Women's Upscale Retail store commissioned kindergarten teacher and artist Kristin McCaslin to create a mural titled "Chanel." It depicts four women of varying shapes, sizes and colors. The aim, according to McCaslin, is that viewers "can relate to them in some way, whether it be in a fashion sense or physical characteristic."

◼️ One of Little Rock's new public murals is distinctive for being located indoors. Visitors to Ottenheimer Library at University of Arkansas at Little Rock pass under Emma Chambers' painting of swimming koi fish. She said inspiration came from Matt McLeod's koi painting in downtown Little Rock that was partly done by UALR students.

A junior with a concentration in painting, Chambers won the university's first student mural contest. She was quoted as saying, "I am really into painting fish, especially koi. I wanted to provide a sense of tranquility and relaxation. I wanted something calming and pleasant for students."

Information on murals in Little Rock is available at littlerock.com/experience-little-rock/tours/murals.