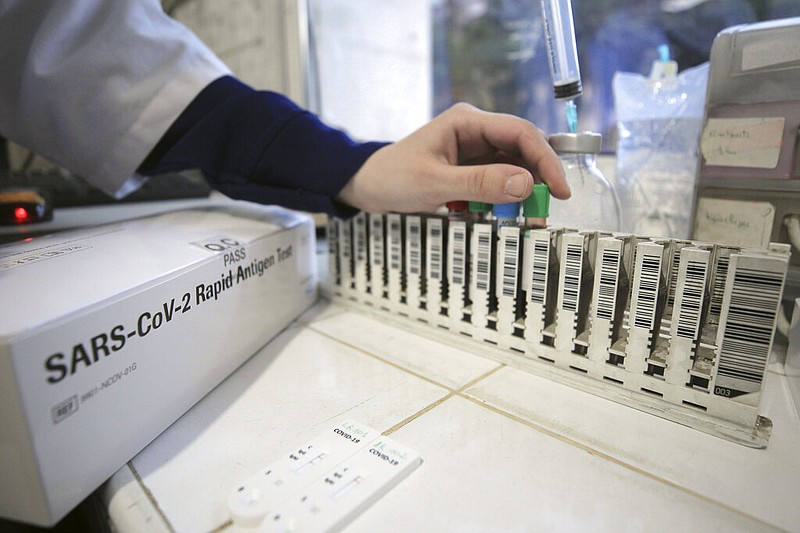 A nurse arranges antigen covid-19 tests in a private laboratory in this Dec. 6, 2020, file photo. Antigen tests, commonly called rapid tests, detect protein fragments specific to the coronavirus. It is different that a PCR test, which detects genetic material specific to the virus. (AP/Fateh Guidoum)

LITTLE ROCK — Arkansas lawmakers on Wednesday advanced legislation that would allow workers to opt out of their employer’s covid-19 vaccine requirement if they’re tested weekly or can prove they have natural antibodies.

The House and Senate Public Health committees endorsed identical versions of the bill, which also would require the state to pay unemployment benefits to workers who are fired for not getting vaccinated. The bills are among several limiting or prohibiting private vaccine mandates working their way through the majority-Republican Legislature.

“This is what we felt we could get through to give employees some protection,” Republican Sen. Kim Hammer said.

Health officials have said people who have recovered from covid-19 should still get vaccinated. The Centers for Disease Control and Prevention says testing for antibodies, the proteins produced by the body to fight infection, should not be used for diagnosing covid-19 or assessing immunity to it.

Republican lawmakers have filed numerous bills targeting vaccine mandates as the Legislature reconvened this week to take up congressional redistricting. The proposals are primarily in response to President Joe Biden’s order requiring workers at businesses with at least 100 employees to get vaccinated or tested regularly.

Randy Zook, president of the state Chamber of Commerce, warned lawmakers that the proposal could force employers between choosing whether to violate state law or federal regulations.

“We are tying the hands of Arkansas businesses that want to make their own decision in how best to keep their people safe,” Zook told the House panel. “We’re screaming bloody murder about a Biden administration mandate when what we’re attempting to do with these laws is to impose a mandate from the state government.”

Opponents said it could also threaten Medicare and Medicaid funding for health care facilities that the federal government is also requiring to mandate vaccinations for employees.

Several other anti-vaccine mandate bills were advanced by the Senate panel, but lawmakers said a compromise was reached to move forward with the opt-out proposal.

Legislative leaders have said the anti-vaccine mandate bills should not be considered since lawmakers are meeting primarily to take up congressional redistricting.

Gov. Asa Hutchinson, a Republican, said he hadn’t read the proposal advanced by both panels, but he repeated concerns he’s raised about lawmakers taking up something outside of redistricting.

“To use [the extended session] as a means to bootstrap yourself into a whole host of other issues doesn’t make sense to me and it doesn’t seem to fit within the constitution,” he said.

The resolution lawmakers approved earlier this year allowing them to reconvene included the covid-19 health emergency and federal relief funds as a possible topic.

Supporters of the antibodies test measure said they believed the proposal would fall under that category because it includes provision to use covid-19 relief funds to pay for an employee’s testing if it’s not covered by insurance.