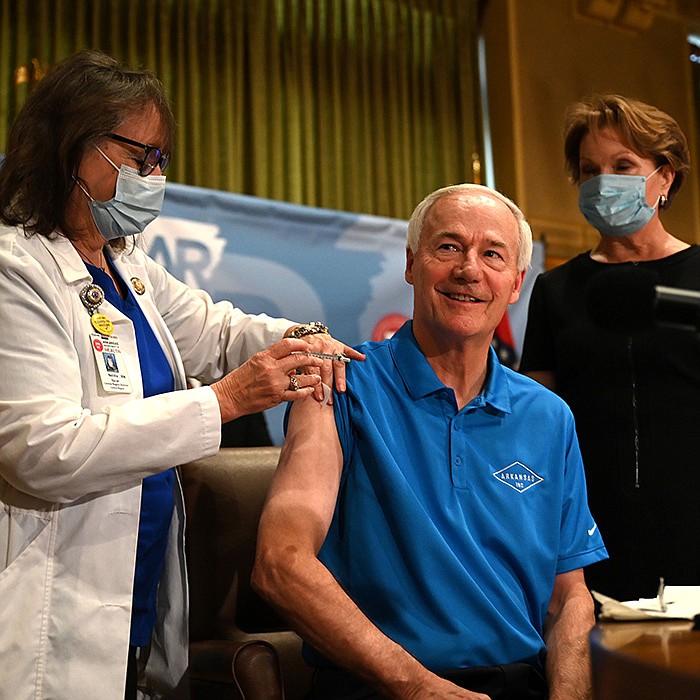 Arkansas' downward trend in new coronavirus cases resumed Tuesday as Gov. Asa Hutchinson announced new options for public school students and employees to avoid having to quarantine after being near an infected person.

At his weekly news conference at the state Capitol, Hutchinson also said he had allowed his public health emergency declaration to expire a day earlier because he "did not need any additional powers to act during this time of the pandemic."

Under Act 403, signed by the governor in March, extending the emergency beyond Monday would have required Hutchinson to submit a request to the Legislative Council at least 10 days beforehand.

The council, which meets when the Legislature is not in session, could have then allowed the declaration to be extended or rejected the request.

"I need to emphasize that we are still in a pandemic," Hutchinson said Tuesday.

"We still have 20-plus people dying every day because of covid, and so just because the technical emergency was not extended does not mean we're not still in a very serious situation with the pandemic and the actions that we need to take.

[Video not showing up above? Click here to watch » https://www.youtube.com/watch?v=iz7lsAS0WUE]

"I just do not need to utilize any emergency powers, and so I didn't ask for an extension of that."

The expiration of the emergency caused the reinstatement of rules that the state Department of Health had suspended to speed the licensure of health care workers.

Health Department spokeswoman Meg Mirivel said the department is reviewing the rules to see if any revisions are warranted.

The state's count of coronavirus cases rose Tuesday by 800, an increase that was smaller by just over 600 from the one the previous Tuesday.

After increases of fewer than 500 cases each day on Sunday and Monday, it marked the first time since July that the state had gone more than two days without a daily case increase that topped 1,000.

The number of people hospitalized in the state with covid-19 fell by 26, to 809, its lowest level since July 19.

After rising the previous two days, the number of the state's virus patients who were on ventilators fell by nine, to 225, its lowest level since July 31.

The state's death toll from the virus, as tracked by the Health Department, rose by 21, to 7,651.

Generally, the Health Department requires people who are within six feet of a person with covid-19 for 15 minutes or longer within a 24-hour period to quarantine for up to 14 days.

State Department of Education guidelines for school districts exempt people who are vaccinated or who had infections within the past three months and recovered from having to quarantine unless they develop symptoms.

Students and employees also aren't required to quarantine if both they and the infected person were wearing masks.

One of the options Hutchinson announced Tuesday -- known as "test to stay" -- would also allow students who don't qualify for one of those exceptions to avoid quarantine if they wear masks and submit to rapid coronavirus tests that come back negative after the exposure.

The other option would allow schools to avoid quarantines altogether if at least 70% of the staff and students are fully vaccinated.

The Health Department is still working on details of the new protocols, spokeswoman Katie White said.

Hutchinson said a number of school districts have expressed interest in piloting the "test to stay" option.

Test kits will be made available on a "first come, first serve" basis to districts that want to participate, he said.

School districts can also use their own testing supplies, she said.

Meanwhile, Education Secretary Johnny Key said the state will use enrollment data due from schools on Friday and Health Department vaccination records to see whether any schools meet the 70% benchmark.

"I think if our school vaccination rates reflect our state vaccinations rates, obviously there won't be very many initially," he said.

But he said some schools could have higher vaccination rates than their surrounding communities and end up qualifying.

So far this week, Key said no school districts have reported shifts to virtual instruction in response to virus cases or quarantines.

In the 24 hours ending at 3 p.m. Tuesday, the Little Rock School District reported that three students and one staff member had tested positive for the virus, and 20 other students had been required to quarantine.

It said all but two of the quarantines resulted from contact between the student and an infected person at school.

The U.S. Centers for Disease Control and Prevention last week recommended the boosters for people who received their second doses at least six months ago and are 65 or older, residents of long-term-care facilities or people age 50-64 with medical conditions putting them at an elevated risk of severe covid-19 illness.

Younger adults with such health conditions and people at increased risk of catching the virus because of their jobs or because they live in institutional settings can also get boosters "based on their individual benefits and risks," according to the agency.

"I thought it was important to emphasize to all of Arkansas that booster shots are available," including at clinics organized by the Health Department's office of health equity, Hutchinson said.

"Everybody who's eligible, we want to encourage them" to get the shot, he said.

Statewide, the number of vaccine doses that providers reported having administered rose Tuesday by 9,431.

Hutchinson said about a third of those were booster doses.

"The point I want to emphasize is that while we're talking about booster doses today, if you have not received your first dose of the vaccine, please get it," Hutchinson said.

"It is critically important to you and your health, but also what we're trying to accomplish as a state."

Hutchinson first declared a public health emergency in response to the pandemic in March 2020, on the same day the first person in the state tested positive for the virus.

He allowed the emergency declaration to expire at the end of May, then reinstated it July 29 amid a surge in cases and hospitalizations blamed on the highly transmissible delta variant and the state's low vaccination rate.

After peaking the next month, the state's new cases and hospitalizations began to decline.

On Tuesday, the state's average daily case increase over a rolling seven-day period fell to 1,010, its lowest level since July 15.

With recoveries and deaths outpacing new cases, the number of cases in the state that were considered active fell by 647, to 10,858.

According to the Health Department, 82.8% of the cases in the state that were active as of Tuesday were among people who had not been fully vaccinated.

Infections of unvaccinated people since Feb. 1 had accounted for 87.7% of the state's cases, 89.8% of its hospitalizations from covid-19 and 87.5% of its deaths from the virus.

According to CDC rankings Tuesday, Arkansas had the country's 26th-highest number of new cases per capita in a seven-day span ending Monday, down from the 21st-highest the week ending Thursday.

Alaska, with 10 deaths per 100,000 residents the week ending Monday, had the highest rate in the most recent ranking.

Within Arkansas, Washington County had the most new cases Tuesday, 77, followed by Pulaski County with 69, and Benton County with 54.

Hutchinson said 9.7% of the state's coronavirus tests were positive in the seven-day span ending Monday, down from the 10% that was initially reported for the week ending Sunday and a high during the summer of 16.3% the week ending Aug. 4.

The number of the state's virus patients who have ever been on ventilators with covid-19 rose by 16, to 2,708.

The increase in vaccine doses that providers reported having administered was larger by more than 2,200 than the one a week earlier.

After falling the previous six days, the average number of doses administered each day over a rolling seven-day period rose to 5,568.

According to the CDC, the number of Arkansans who had received at least one vaccine dose rose Tuesday by 631, to 1,677,280, representing about 55.6% of the state's population.

Among the states and District of Columbia, Arkansas continued to rank 37th in the percentage of its population who had received at least one vaccine dose and 42nd -- ahead of Louisiana, Tennessee, Georgia, North Dakota, Mississippi, Alabama, Idaho, Wyoming and West Virginia -- in the percentage who were fully vaccinated.

Nationally 64.4% of people had received at least one dose, and 55.8% were fully vaccinated.