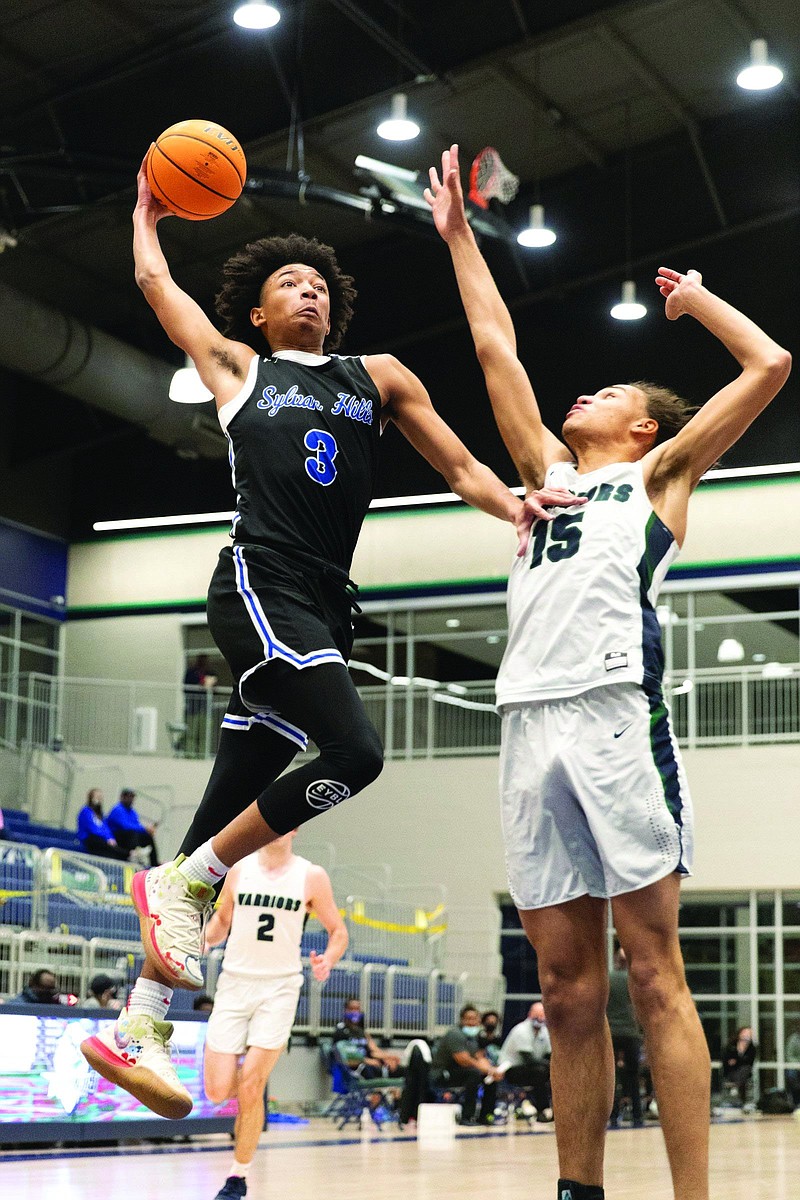 Nick Smith (left), seen here playing for Sylvan Hills in February, announced his commitment to the University of Arkansas on Wednesday night. Smith, a guard who will play his senior season of high school basketball at North Little Rock, is ranked as a five-star recruit by ESPN. (Arkansas Democrat-Gazette/Justin Cunningham)

Smith said the culture around Coach Eric Musselman's program was too hard to pass up.

"He was like by far the most thing I was looking for in terms of business and hoops," Smith said. "I just have to take that chance."

An ESPN 5-star recruit, Smith is the highest-ranked recruit to pledge to Arkansas in the modern recruiting service era where he is ranked No. 6 nationally by ESPN.

ESPN also ranks Smith the No. 4 shooting guard in the nation for the 2022 class.

Portis was previously the highest-rated in-state prospect in the ESPN rankings when he was ranked 16th at Little Rock Hall. Guard B.J. Young, who committed to the Razorbacks in 2011, was also 16th.

Musselman's NBA background was a big factor to Smith.

"He kept preaching that ever since I started this recruiting process," Smith said. "That's really the only thing I wanted to see."

He said he's parents were behind his decision regardless where he committed.

"My family is going to support me wherever I go, whether it's Alabama, Auburn or UAPB," Smith said.

"I really haven't been talking to them lately but I'll stay in touch with them for sure," Smith said. "Come play with me. Why not?"

Musselman's first two seasons at Arkansas that included the Elite Eight appearance this past season, helped the Hogs' cause.

"If you know Muss, you know Muss is a competitor," Smith said. "He does not like to lose. That's a gene I have. I don't like losing and I know for a fact he's going to push me each and everyday. He's going to push his team. The season they had last year was a great season but his competitive drive really got to me."

An estimated crowd of about 250 that included family, friends, teammates and Razorback fans showed up for his announcement at Arkansas Fitness and Athletics in Little Rock.

"I didn't know a lot of people would come but I knew it would be a good amount," Smith said. "I thank everybody that came out to support me."

Smith led the Brad Beal Elite AAU team to a 6-2 record and into the finals of the Nike EYBL Peach Jam Basketball Tournament while averaging 18.6 points, 3 rebounds and 3 assists per game.

He scored 31 points in the championship game and became the first player since Denver Nuggets forward Michael Porter Jr. to score more than 30 in the finals.

"My reputation is everything, I just wanted to prove you can stay in the state and do what other people are doing," Smith said.

He said he's relieved to have his decision out of the way.

"But after I got done talking with my family about it, I'm more comfortable putting it out to [the] public," Smith said. "I knew for a fact it was the right choice for me."

During a recent in-home visit with Musselman, Smith took his future coach to the side and told him he was going to be a Hog.

When asked if he would sign during the early signing period that runs Nov. 10-17, Smith said he wasn't sure when he would sign.