State bills on employer-mandated shots advance, but fit for session at issue 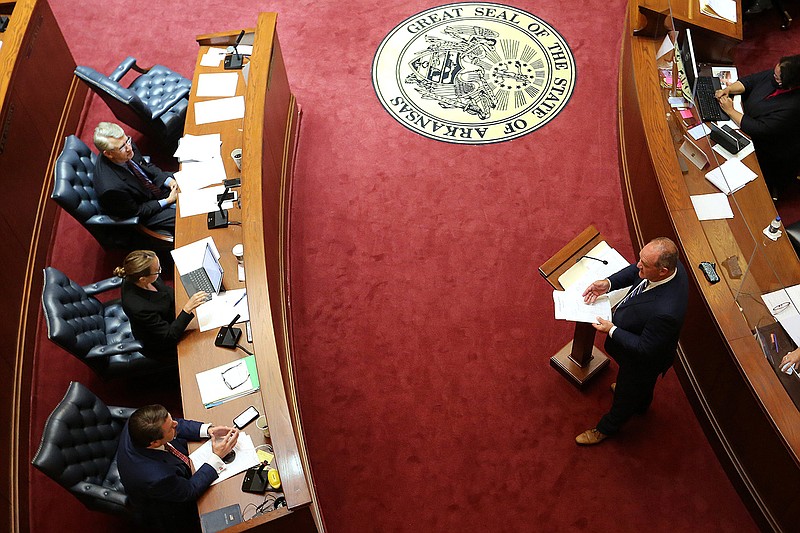 Senate President Pro Tempore Jimmy Hickey speaks Wednesday about the legalities of restarting the regular legislative session and what bills could be put on the agenda. Disagreements emerged after numerous bills related to the pandemic were filed. (Arkansas Democrat-Gazette/Thomas Metthe)

House and Senate committees Wednesday advanced a number of bills dealing with employer-mandated vaccinations, amid disagreement over whether the Arkansas Legislature could legally consider those bills based on how lawmakers were called back into session.

The 93rd Arkansas General Assembly met in its biennial regular session from January through April, but it recessed to wait for the federal government to release data from the 2020 U.S. census that it will use to redraw congressional districts.

At issue was whether numerous filed bills that are broadly related to the covid-19 public health emergency could be heard, a discussion that dominated the first two hours of the day for the Senate, which met as a Committee of the Whole in the morning.

A motion from Sen. Jonathan Dismang, R-Searcy, to delay until this morning the decision on whether bills unrelated to redistricting are germane to the call failed to carry when the vote tied 16-16 in the 35-member Senate. Dismang hoped lawmakers would focus on redistricting bills Wednesday. Legislative leaders had hoped the session would end Friday.

Twelve coronavirus-related bills were assigned to the Senate Committee on Public Health, Welfare and Labor, which advanced eight of them to the full Senate without discussion or public testimony.

Sen. Breanne Davis, R-Russellville, moved that the committee advance all of the bills except four that Sen. Trent Garner, R-El Dorado, plans to amend. The committee backed the motion without any dissent or discussion on the bills.

"We're doing this because we're on an expedited schedule, none of us were prepared to hear 12 bills, and so we felt like this would be the best thing and ultimately they have to be on the floor anyway," committee Chairwoman Cecile Bledsoe, R-Rogers, said.

All eight bills advanced by the committee deal with employer-mandated vaccinations.

SB731 includes language that would allow the state Department of Finance and Administration to establish a grant program with distribution of covid-19 relief funds or funds received under the federal American Rescue Plan to provide restitution to individuals injured by a violation of the measure.

Sen. Bob Ballinger, R-Ozark, is the sponsor of both, as well as Senate Bill 736, which would require employers that are forced to mandate vaccinations to provide an exemption process.

Ballinger said he planned to pass over his own bills in favor of a similar piece of legislation backed by the committee, Senate Bill 739 by Sen. Kim Hammer, R-Benton, because there was more consensus among lawmakers around Hammer carrying the bill.

"My assumption is that we'll have no trouble getting Sen. Hammer's bill through the process, but if for whatever reason one of them failed, we'll have other bills that we can run," Ballinger said.

Ballinger said lawmakers needed "to step in and find some ways to provide relief for our people" from a federal vaccination mandate.

Earlier this month, President Joe Biden's administration issued a mandate applying to businesses with more than 100 employees, requiring workers to be vaccinated or submit to weekly testing.

"We're about to see thousands of people get fired because they would like to make a choice about their own health care, and I'm not OK with that," he said.

Senate Bill 732 by Sen. Blake Johnson, R-Corning, would prohibit a person from coercing another to receive a coronavirus vaccine if it is "medically contraindicated" for the other person as attested to by a doctor's note or if receiving the vaccination violates the person's religious or philosophical beliefs.

Three bills from Sen. Alan Clark, R-Lonsdale -- Senate Bill 737, Senate Bill 738 and Senate Bill 739 -- would prohibit private employers and public accommodations from discriminating based on a person's vaccination status or possession of a vaccine passport and from mandating coronavirus vaccinations.

The gallery of the committee meeting was full -- and at times loud -- with those for and against House Bill 1972, which was filed that morning by Rep. Joshua Bryant, R-Rogers. The bill was co-sponsored by Ballinger.

The bill would require Arkansas businesses to provide an exemption process that would allow the employee to either produce a negative antigen or molecular diagnostic covid-19 test no more than one time per week or proof of the presence of antibodies -- which the body creates when an individual is infected with covid-19 -- on an annual basis.

The employee could not be terminated for refusing to get vaccinated if the exemption process were followed, according to the bill.

HB1972 also opens up funding from the American Rescue Plan Act to assist employees with the required testing costs if they are not covered under the employees' health insurance.

"I think what we're faced with is we don't want regulation of our businesses, but we want to allow personal freedoms and liberty," Bryant said. "So when those two come together and meet, you just have to step on one side of the fence."

Bryant said he got involved with this issue after receiving calls from his constituents, adding that what it "came down to is the businesses weren't playing fair." He received reports that some employers were threatening the jobs of some workers who refused to get vaccinated while allowing others in more critical positions to keep theirs.

Rep. Joe Cloud, R-Russellville, asked if the bill would hold employees to the same exemption status for all vaccines or solely for the covid-19 vaccines.

Bryant said it would only apply to the coronavirus vaccines.

"If we're going to provide protection for employees, we don't want to do something, then realize we left a loophole," Cloud said.

Rep. Deborah Ferguson, D-West Memphis, told Bryant that if hospitals do not require vaccination, then they lose Medicaid and Medicare funding.

"I don't want us to do anything that's going to prohibit hospitals from mandating vaccines when it could completely shut them down, because if they don't get Medicare reimbursement, they can't survive," she said.

Bryant said he didn't know how the bill would affect hospitals in the state because federal guidelines on the vaccination mandate have not been released yet.

"Are we, as a state, going to allow the federal government to tell us what to do because they've got a bag of money right there?" he said.

Later in the meeting, Mark White, the Department of Human Services' chief of staff, said the bill would have dire consequences on the state's five human development centers and the State Hospital.

If those facilities were found to be in violation of the federal vaccination mandate, then the state would have to make up more than $130 million in lost funding, White said.

Randy Zook, president and CEO of the Arkansas State Chamber of Commerce, told the lawmakers that the bill was "bad for business in Arkansas."

Furthermore, Zook said, testing employees only once a week for covid-19 is not sufficient to protect co-workers and customers.

Rep. Aaron Pilkington, R-Knoxville, asked Zook if any survey had been conducted to gauge the effect of employees leaving the workforce.

Zook said no survey has been done, but he has heard that employees of a large poultry manufacturer in the state were choosing to get vaccinated when faced with termination.

Chelsea Bitner, who said she was a health care worker at Mercy Hospital in Rogers, said she was being suspended this week because she refuses to get vaccinated against covid-19.

She pleaded with her employer to test her for antibodies from a past covid infection but was still suspended, Bitner said.

The audience broke into applause and loud cheers when Bitner likened the vaccination mandate to the Salem Witch Trials of 1692 in Salem Village, Mass. In that historic event, several women were accused of witchcraft and were convicted after a special court was convened.

"Make no mistake that we are being terminated," Bitner said.

Earlier Wednesday, Shepherd ruled that House Bill 1958, another bill from Bryant that would establish a right of privacy concerning coronavirus vaccination, was not germane to the resolution allowing the Legislature to reconvene after the extended recess.

Bryant then filed House Bill 1973, which would do the same thing plus establish a grant program from covid-19 relief funds. Both have Ballinger as a co-sponsor.

Republican Gov. Asa Hutchinson said in a written statement Wednesday afternoon that he had not yet reviewed the bills advanced by the committees but that he did not think they should be considered at all, adding that he opposed levying mandates on employers, whether the mandates required vaccination or prohibited requiring vaccination.

"I have not studied the recently filed bills yet, but the only real purpose of this extended regular session is to accomplish congressional redistricting. Everything outside of redistricting should not be considered. As to the bills themselves, if they are placing mandates on businesses and restrictions on employers in our state then I oppose them as limiting freedom. I oppose heavy handed government mandates whether the government is requiring vaccines or prohibiting employers from requiring vaccines," Hutchinson said.

For the covid-related bills to take effect immediately, they must have an emergency clause that is approved by two-thirds of the Legislature -- 24 votes in the 35-member Senate and 67 votes in the 100-seat House. Otherwise, the bills take effect 90 days after the session ends.