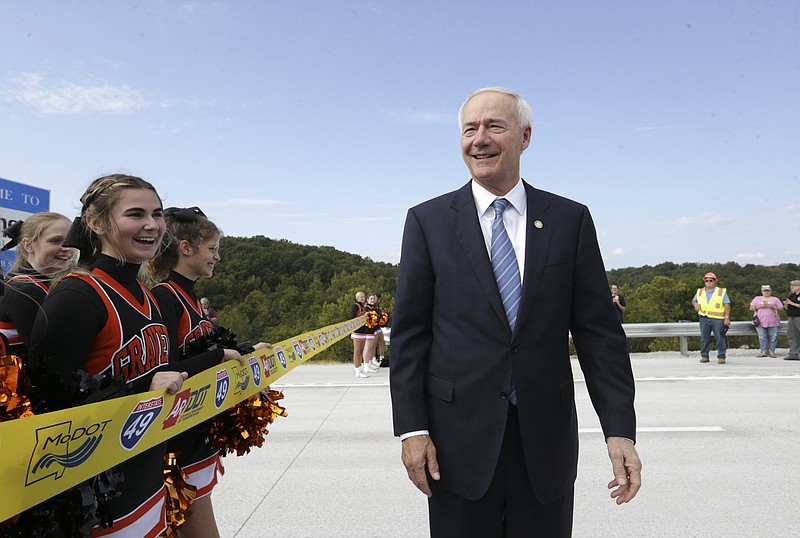 The newly constructed highway will open to the public Friday.

"This highway, yes, it's going to be a lot safer. Yes, it going to be more convenient. But I guarantee, it'll also drive the economy of both our states because it'll be opportunity. You will see business follow this interstate," said Parson.

"I think it's extremely important in today's time that we figure out how we partner with one another. States need to partner together. There's no reason for us to do things on our own when we can put our resources together and make things better. This is the future of what you're going to do for infrastructure in our country," Parson said

Hutchinson highlighted the growth in Northwest Arkansas. "Whenever you look at what's happening in Northwest Arkansas and southwest Missouri, our economy is boosting. But if we do not have this kind of investment in infrastructure, then we can't keep growing our economy. While this won't guarantee we'll continue to prosper in the future, it sure means we're not going to stymie the growth we already have."

The completion of the project links 265 miles of interstate between Fort Smith and Kansas City, Mo. The road replaces what was the only missing link in that portion of I-49. Travellers for years have had to leave I-49 and navigate through a series of stop lights in Bella Vista on U.S. 71/Bella Vista Way. A 2015 study reported the road in Bella Vista was one of the most congested corridors in the region.

The new road will allow motorists to circumvent Bella Vista to the west and south on a four-lane, controlled access highway.

The project has also been called the Interstate 49 Missouri/Arkansas Connector, a nod to its regional importance.

Interstate 49 is considered a high-priority corridor and Arkansas, Missouri and federal transportation officials have discussed the need for a Bella Vista Bypass for more than 25 years.

Construction consisted of six projects totaling more than $220 million and began in February 2011.

The Northwest Arkansas Regional Planning Commission applied for, and received, a $25 million federal grant in December 2018 and gave the money to Missouri to complete I-49. The I-49 Missouri project is in the commission's planning area.

The two projects were the last 2.5 miles from Hiwasse to the state line and the single-point urban interchange to replace the roundabout at I-49 and U.S. 71 in north Bentonville, where the new highway heads west.

The estimated cost of the two projects is just over $100 million. Emery Sapp & Sons is the primary contractor on both.

Print Headline: Governors cut ribbon on missing link of I-49