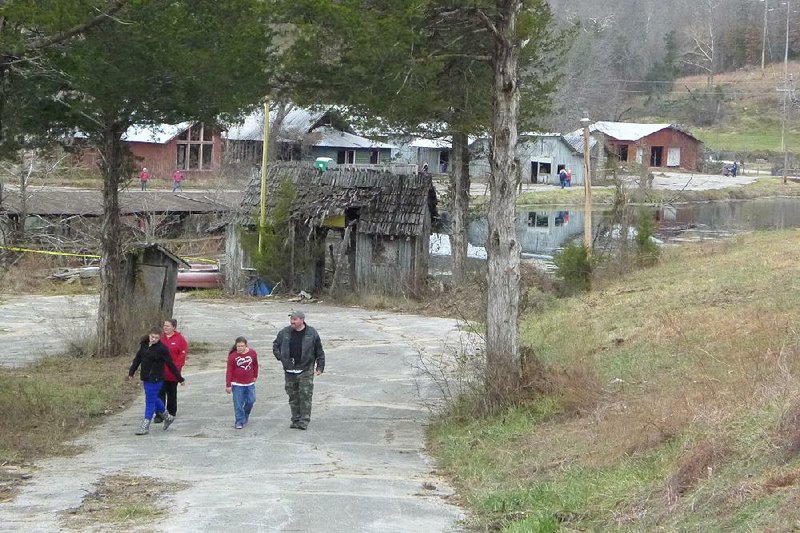 Thousands of people visited the former Dogpatch USA theme park property in Newton County over the weekend. For many, it was the first time they'd been there since the park was open, which was from 1968 to 1993. Arkansas Democrat-Gazette/Bill Bowden

The Newton County park will focus on the community's history, which includes being the site where a block of marble was quarried, carved and transported to the nation's capital in 1836 and was one of the first stones to be incorporated into the Washington Monument, according to the presentation. The area also has been a health resort featuring the waters from a local spring.

The 400-acre Dogpatch site sold for $1.12 million. For years, people in north Arkansas tried to get Morris to buy Dogpatch. But the price was $3 million in 2016. The former park's price eroded -- along with the site.

Constructed in 1967 for $1.33 million (about $10 million in today's dollars), Dogpatch USA originally featured a trout farm, buggy and horseback rides, entertainment by characters from Al Capp's Li'l Abner comic strip and the park's trademark railroad, according to the Encyclopedia of Arkansas. Amusement rides were added later.

Morris has a net worth estimated at $4.1 billion, according to Forbes.com, and a record of successful conservation projects. He developed Big Cedar Lodge, billed as "America's premiere wilderness resort," and the 10,000-acre Dogwood Canyon Nature Park, both of which are in southern Missouri.

Dogpatch was set for sale on the Newton County Courthouse steps in a foreclosure auction March 3, 2020 before Morris company bought it.