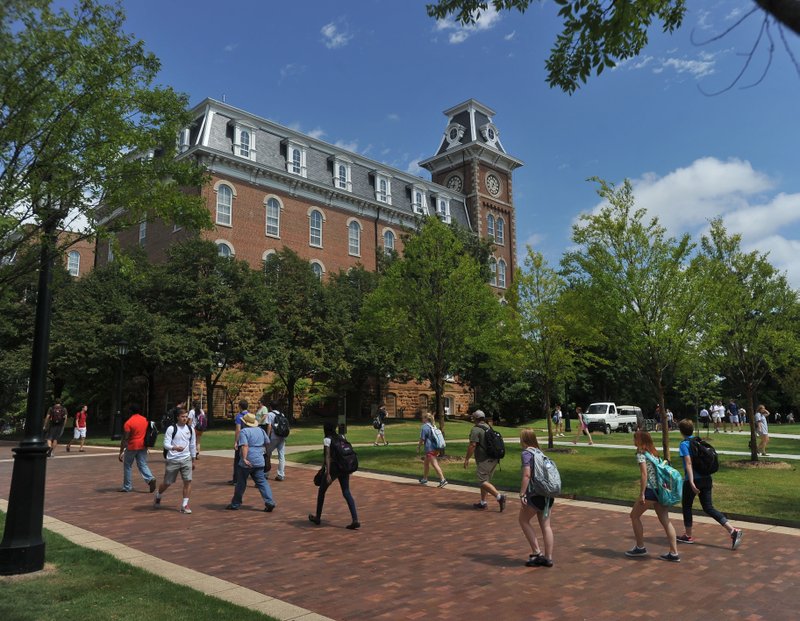 University of Arkansas students walk past Old Main on the U of A campus in Fayetteville in this 2014 photo.

Fewer students enrolled in the state's public universities this fall compared to a year ago, according to preliminary data from the state Division of Higher Education.

How did the gains and losses shake out across the various campuses?

Taken together, the data showed overall enrollment across all public universities fell 1.2% from 2020 to 2021.

How does this year’s drop compare to past years?

Total combined enrollment at the state's public universities, including University of Arkansas for Medical Sciences, declined for the fifth consecutive year, falling from more than 100,000 students in fall 2016 to 92,188 students this fall.

For all schools, public, private and community college, undergraduate enrollment declined for the 10th consecutive year, falling from 142,442 students in fall 2011 to a preliminary count of 109,287 this fall.

Colleges in Arkansas and elsewhere for years have been tracking population trends showing anticipated declines in students of traditionally college-going age, said Michael Miller, a professor of higher education at UA-Fayetteville.

Miller said that competition for in-state students comes from the big players in online education, like Arizona State University, as well as from campuses outside of Arkansas that seek to bring in large numbers of out-of-state students.

Rising costs and the creation of microcredentials that offer certificates in particular skills, such as coding, also affect people’s decisions of whether to go to college.

Read more about enrollment at state colleges, including private and community colleges, from reporter Jaime Adame.