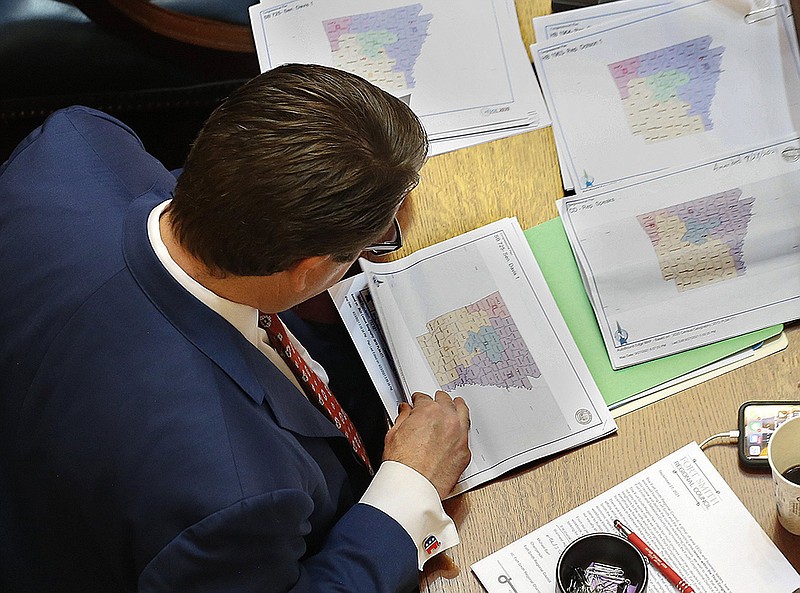 Sen. Jason Rapert looks over proposed congressional redistricting maps during the Senate session. Rapert said it was his understanding that no compromise had been reached between the Senate and the House over how the districts would be redrawn. More photos at arkansasonline.com/930session/. (Arkansas Democrat-Gazette/Thomas Metthe)

Arkansas lawmakers remained deadlocked over how to redraw the state's four congressional districts at the end of the first day they reconvened for that purpose.

The Arkansas Legislature is responsible for reconfiguring the district lines for U.S. representatives and went into an extended recess of its 93rd regular session at the end of April to wait for the federal government to release population data from the 2020 U.S. census.

Though the leaders of the House and Senate committees on State Agencies and Governmental Affairs met with the intention of finding a consensus, none was reached by the end of the day Wednesday.

"It's my understanding that there's not a compromise that's been made at this time talking with the House and I understand that they're in the same position that they were, trying to talk some things out," Sen. Jason Rapert, R-Conway, said at the second of the committees' two meetings that day. He is the chairman of the Senate committee.

Rapert noted earlier in the day that it would be "fruitless" for the Senate to pass a bill that conflicts with one passed by the House and that there seemed to be the most consensus for maps proposed by Sen. Breanne Davis, R-Russellville, and Rep. Jim Dotson, R-Bentonville.

Several proposals that the two legislators had filed as of Wednesday evening would add Pope and Cleburne counties to the 2nd Congressional District by taking one of two paths: splitting Pulaski County or splitting Saline County.

Davis said Wednesday afternoon that she planned to file another bill that would unite Sebastian County, which under the existing boundaries is split between two districts.

Dividing a county between several congressional districts has been a contentious issue as lawmakers discussed redistricting proposals over the past week. Pulaski County, with a population of nearly 400,000, is the state's largest county. It is also more racially diverse and one of a few counties whose residents consistently vote for Democratic candidates in the deep-red state.

Arkansas' population grew to 3,011,524 people in the past decade, making the ideal population for each district 752,881. Lawmakers must account for population growth or loss in different regions of the state to keep the four districts close to the same number of people.

The Senate committee heard presentations on Davis' Senate Bill 725 as well as Senate Bill 728 by Sen. Joyce Elliott, D-Little Rock, but did not vote.

Davis said the goal was to make sure cities stayed together and follow natural boundaries. English questioned whether the population of the 2nd Congressional District could be balanced by not adding Pope or Cleburne counties, to which Davis said the 2nd Congressional District would still have to adjust for population even if those counties were out.

"This is the second-best map I've seen and I'm willing to support it," Sen. Bart Hester, R-Cave Springs, said.

Hester is the sponsor of Senate Bill 721, which would create draw the congressional district lines based mainly on geography while splitting Pulaski County three ways.

"The citizens of Sebastian County hated being divided," Pitsch said. "We want to be in the 3rd and we want to remain whole."

In presenting SB728, Elliott said the bill would give the "opportunity for us to do something historic."

The bill places Pulaski County in a redrawn 2nd Congressional District that would cover southeast Arkansas. When she first presented it Monday, she said it would allow groups with common interests to have the influence to elect who they want and that it gives minority representation, in addition to the other redistricting criteria.

On the House side, committee members plan to vote today on which bill will move out of committee. House members narrowed the choices down to three with a written ballot vote Wednesday.

HB1971 keeps all counties except Pulaski as a whole in one district. Speaks' map shows the majority of Pulaski County -- including Little Rock, North Little Rock and Jacksonville -- in the 2nd District, but put a small portion on the southeast corner of the county in the 4th District.

"We just done enough to get out to where we could make our numbers come out to what we have to have," Speaks said, referring to how close the population of each district under her map compares to the ideal population. "And everything is below 1%."

Rep. Jack Ladyman, R-Jonesboro, who joined Speaks at the table when the bill was presented, said he came on board for HB1971 because it does not make wholesale changes.

"It's just not possible to do this without splitting at least one county," he said.

Speaks said all of the cities are whole.

HB1970 leaves Fort Smith as part of the 3rd District, but keeps Greenwood in the 4th District. Jefferson County changes one precinct while Saline County is kept whole.

Everything on the east side of U.S. 167 would be divided along that major thoroughfare, Dotson said.

The bill was one that labored with a "lot of input" from different groups, Dotson said.