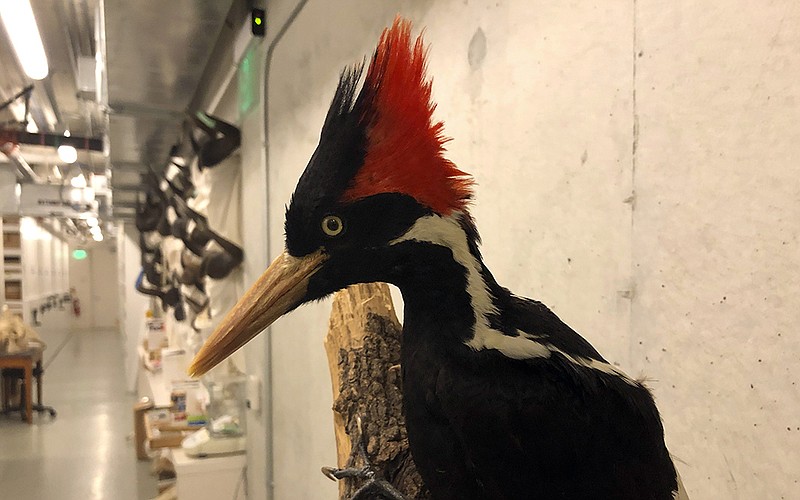 An ivory-billed woodpecker specimen is on exhibit at the California Academy of Sciences in San Francisco. America’s long-lost largest woodpecker enjoyed a brief period of renewed existence when it was reportedly spotted in southeast Arkansas swampland in 2004. (AP/Haven Daley)

A rare woodpecker last seen in the Big Woods of east Arkansas is extinct, according to the federal government.

The ivory-billed woodpecker was considered extinct for about 60 years.

Then, it rose like a Phoenix from the ancient cypress-tupelo forests of Bayou DeView in 2004.

Gene Sparling of Hot Springs said he saw an ivory-billed woodpecker in February 2004 while he was kayaking in Bayou DeView, a few miles northwest of Brinkley.

He notified Cornell University's Lab of Ornithology, which dispatched a couple of researchers, who also saw an ivory-billed woodpecker in the vicinity.

One of them "began sobbing," according to The New York Times.

A secret investigation began in the swamp forests of east Arkansas, led by the Cornell lab and The Nature Conservancy.

[Video not showing up above? Click here to watch » arkansasonline.com/930ivorybill/]

Evidence from Cornell and Nature Conservancy researchers was laid out in a 2005 issue of the journal Science.

"In all, during more than 7,000 hours of search time, experienced observers reported at least 15 sightings of the ivory-bill, seven of which were described in the Science article," according to an article that same year in the Cornell Chronicle. "Because only a single bird was observed at a time, researchers say they don't yet know whether more than one inhabits the area."

The ivory-billed was once America's largest woodpecker. With its prominent beak and a wingspan of 30-inches, it was known as the "Lord God Bird" because -- when it swooped down from the sky -- people would exclaim "Lord God!"

After a flurry of woodpecker tourism in Arkansas, there were no more documented sightings of the elusive bird.

Although it was thought to be extinct decades ago, the ivory-billed woodpecker has been listed since 1967 as an endangered species.

The U.S. Fish and Wildlife Service is proposing to remove the ivory-billed woodpecker and 22 other species from the endangered species list and declare them extinct, according to a Wednesday news release. Public comments will be taken until Dec. 29 before the final decision is made.

David Luneau Jr., an associate professor of engineering technology at the University of Arkansas at Little Rock, shot video of what is believed to be an ivory-billed woodpecker in 2004 on Bayou DeView. But the video -- shot from a camera on a cushion on a crate in a canoe -- is blurry.

Luneau said he was surprised by the announcement Wednesday.

"In 2005, 2006 and 2007, when the rediscovery happened and there were skeptics, the Fish and Wildlife Service sided with us and said it's definitely not extinct," he said. "I don't know what happened to change their minds about it."

John W. Fitzpatrick, emeritus director of the Cornell Lab of Ornithology, said the Wildlife Service will be hearing from him during the comment period.

"I'm expressing my considered opinion that this announcement is absolutely premature," Fitzpatrick said in an email. "Yes, the bird MIGHT be extinct, but there is plenty of reason to acknowledge that it MIGHT NOT be extinct. In such a case, we lose a lot more than we gain by declaring it officially gone. Instead, we should continue to acknowledge that as an iconic representative of southeastern forests and their recovery, this bird should remain on our list of critically endangered species while we continue to seek evidence of its existence, and continue to recover the old growth forests of the southeast."

Fitzpatrick said the suspected extinction of other species mentioned in the news release are much more definitive.

Some of the other species proposed for delisting include Bachman's warbler, the flat pigtoe freshwater mussel and a Hawaiian bird known as the Molokai creeper.

Based on Wednesday's news release, the Fish and Wildlife Service now sides with the skeptics.

"The last commonly agreed upon sighting of the ivory-billed woodpecker was in April 1944 on the Singer Tract in the Tensas River region of northeast Louisiana," according to the news release.

"The key to their phrase is 'commonly agreed upon,' because debate exists over the quality of our evidence from 2004-05, those records don't qualify for universal agreement," Fitzpatrick said in an email. "This, of course, does not negate that certain of the post-1944 reports and evidence could have been accurate, and that uncertainty continues to exist."

Fitzpatrick said he didn't personally see an ivory-billed woodpecker in Arkansas, but his brother Jim did.

Sparling said of the ivory-billed extinction announcement was "kind of a sad thing."

"I don't know that it's inappropriate, but it's regrettable nevertheless," he said. "I don't think there's any question that it's a possibility."

Sparling said he was exploring swamps in east Arkansas when he first spotted an ivory-billed woodpecker in 2004.

"I'm just sorry we weren't able to find clear-cut substantiation of the existence," he said. "We were never able to get that 8-by-10 glossy."

Sparling said there is some "stunningly, exquisitely beautiful habitats that remain" in east Arkansas.

But they are only remnants.

"We do not have the political nor moral will to not despoil Eden," he said.

Luneau said he's been interested in birding since he was a kid in Pine Bluff.

As a young adult, he became intrigued by the ivory-billed woodpecker. Luneau spent a month in the Pearl River Wildlife Management Area near Slidell, La., after a reported sighting there in 2002.

Then, after seeing an ivory-billed woodpecker on Bayou DeView in 2004, he went back there three to five times a week, very early in the morning, and put his canoe in the water to search for the bird before he had to be back in Little Rock to teach his classes. But he never saw it again.

Luneau said the Fish and Wildlife Service's announcement isn't the death knell for the ivory-billed woodpecker.

"It's not inevitable, and it's not immediate," he said. "My thought on it is the woodpeckers don't read the papers, so if they're declared extinct or not is not going to matter to them. What matters to them is how we protect the land. We're doing it better than we used to. We could always do it better."

David Stahle, a distinguished professor of geography at the University of Arkansas, Fayetteville, said the species is likely lost.

"We are now witnessing an avalanche of loss in animal life," he said in an email. "The World Wildlife Fund and the Zoological Society of London have been conducting regular wildlife population surveys globally since 1970. They document a shocking 68% worldwide decline in animal abundance in just 51 years. This is the crisis of life on Earth and we must do more to protect nature."

“Yes, the bird MIGHT be extinct, but there is plenty of reason to acknowledge that it MIGHT NOT be extinct.”

John W. Fitzpatrick, emeritus director of the Cornell Lab of Ornithology, saying the U.S. Fish and Wildlife Service will be hearing from him 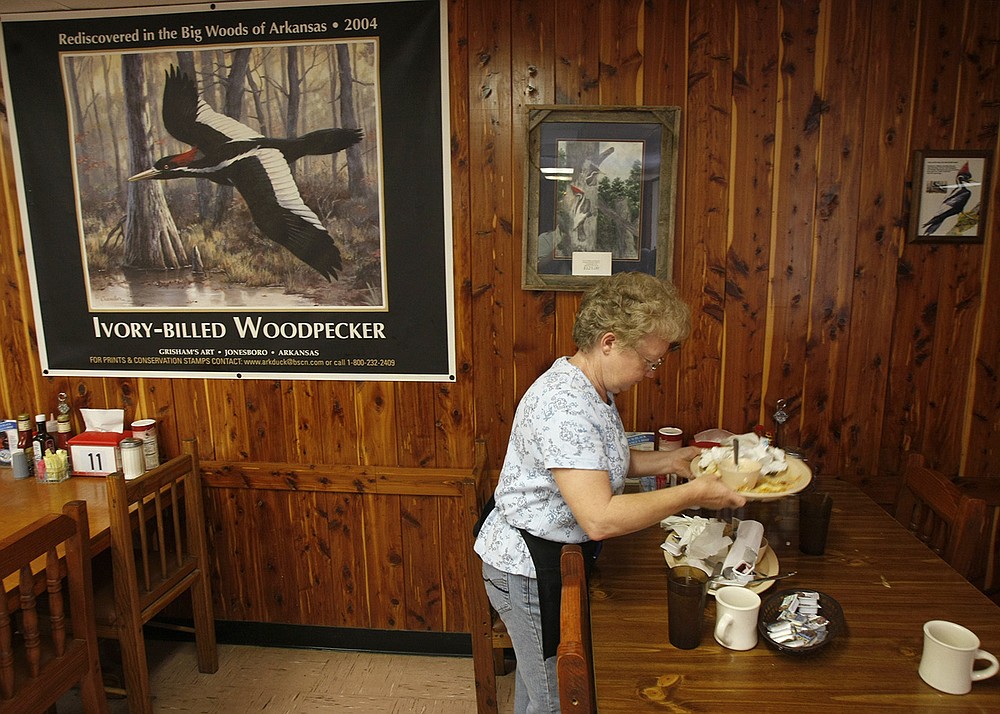 Waitress Virginia Wilhoite clears a table at Gene’s Restaurant and Barbeque in Brinkley in 2009. Even though business had slowed, a painting of an ivory-billed woodpecker still held a prominent spot several years after the woodpecker spurred a flurry of tourism. (Arkansas Democrat-Gazette/Staton Breidenthal) 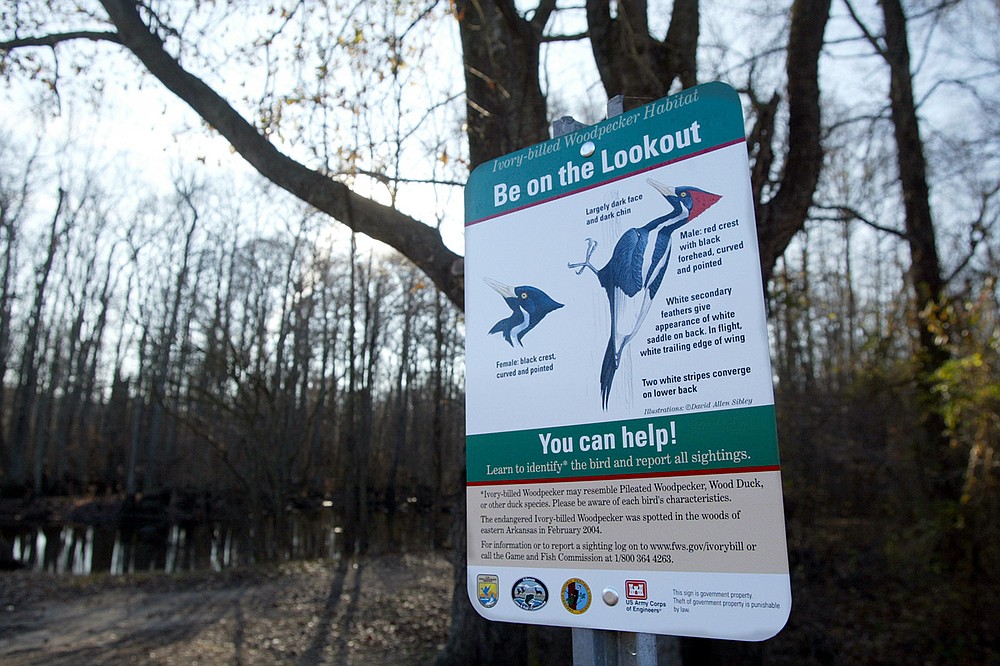 A sign at an entrance to the Benson Creek Natural Area near Brinkley in late December 2005 asks hikers to be on the lookout for ivory-billed woodpeckers. (Democrat-Gazette file photo)
ADVERTISEMENT