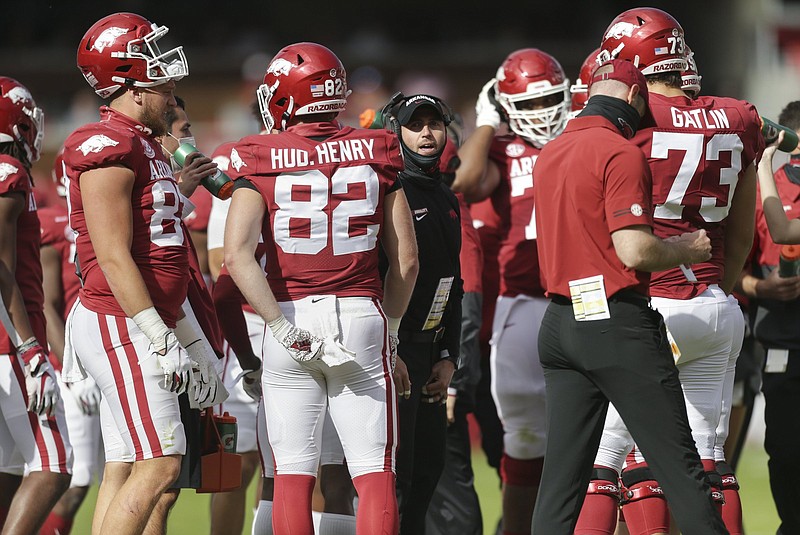 Kendal Briles, who is in his second season as Arkansas’ offensive coordinator, has delivered with a strong and unpredictable offense during the Razorbacks’ 4-0 start this season. “I mean everything he calls he thinks is going to work,” Razorbacks Coach Sam Pittman said. “Everything. It’s not a question in his mind.” (NWA Democrat-Gazette/Charlie Kaijo)

FAYETTEVILLE -- The expertise of both University of Arkansas coordinators was on display in Saturday's 20-10 upset of No. 7 Texas A&M.

Defensive coordinator Barry Odom schemed up a 3-2-6 attack that managed to not only fit gaps against the strong Aggies' run game but also prevented them from getting deep shots in the passing game.

Offensive coordinator Kendal Briles got the Razorbacks' zone-read run game heated up early with Trelon Smith's runs of 16, 15 and 12 yards on the first three snaps. Then the offense attacked downfield and outflanked the Aggies on key plays to seize the tempo of the game.

Odom, Briles and special teams coordinator Scott Fountain have their units in solid form with the No. 8 Razorbacks (4-0, 1-0 SEC) headed into their toughest challenge yet on Saturday at No. 2 Georgia (4-0, 2-0).

"Just so thankful for our assistant coaches," Arkansas Coach Sam Pittman said Saturday. "Man, I got some good coaches now."

[Video not showing up above? Click here to watch » arkansasonline.com/930uapittman/]

The schemes on both sides of the ball are drawing rave reviews.

CBS analyst Gary Danielson called Odom's defensive approach an "umbrella coverage" that allowed the defensive backs to keep their eyes on Texas A&M quarterback Zach Calzada, much like the Razorbacks did to slow Mississippi State and Ole Miss in Arkansas wins last season.

Georgia Coach Kirby Smart's defense is No. 1 in the country in both total defense, allowing 185.2 yards per game, and scoring defense (5.8), but he said there are things Arkansas does better than his unit. Smart described Odom's approach as making an offense play left-handed.

"I don't know that we're as good at it as Barry and those guys," Smart said. "Barry and them come at you very differently schematically. We're probably closer to the norm in terms of our league and Barry and them are not."

Pittman said Saturday that it's not just the seamless switching between 3-man and 4-man defensive fronts that has made Arkansas tough. It's how the Hogs change up their alignments, how they assign gap coverage, where stunts originate and how all that multiplicity impacts prep time.

Senior defensive end Tre Williams, who transferred this season after playing at Missouri during Odom's tenure as head coach with the Tigers, said executing Odom's plans are all about confidence.

[Video not showing up above? Click here to watch » arkansasonline.com/930uapittman2/]

"It gives the other teams problems," Williams said. "He always has a great game plan, and we're extremely bought into it. ... You've got a guy like me at 255 [pounds], you've got a guy like [Eric] Gregory that's 270. ... We may not make the play all the time, but I just know for a fact our linebackers will correct it and our corners will get it corrected."

Pittman said Odom and the defensive staff scheme up their fronts specifically for each opponent.

"I was talking to Tre Williams last week and he said, 'You know it's kind of amazing how we can line up in this look, that look, this look and all of us believe this is the way we're going to stop our opponent if we'll play hard, we'll play fast and we'll run to the football.'

Added Smart, "They're an extremely tough prep because of the way they play. It's just different, I can't explain it, you would have to watch the tape. Their kids play extremely hard, extremely physical, the strain is enormous. ... But I can't say that we make people left-handed as much as they do."

Arkansas cornerback LaDarrius Bishop said, "It's just the way we run to the ball, our coverages, it's so strong, it's kind of hard for a quarterback to just get a ball away because our D-Line is eating up front.

"We're gonna take care of our part in the back end, so we just work together as one and that's how we make everything happen."

Arkansas' ability to get pass pressure and limit the run game with a three-man front dictated the course of last week's game.

"We didn't have time, and we had [deep] calls," They're playing 3-5-3. They were playing a really, really deep zone. They were bailing. They were trying to give you all underneath throws or all intermediate throws. ... The way they play, they take a lot of your deep balls away. We called about six shots in the game, and they played them and that's why we were checking the ball."

On the other side of the ball, Briles has managed to mesh quarterback KJ Jefferson and the skill players into his run-pass option principles with the aid of a veteran offensive front.

On Arkansas' second possession against Texas A&M, Briles noted man coverage with Treylon Burks matched against cornerback Myles Jones and signaled in a deep shot, which Jefferson delivered with an 85-yard tone-setting pass play for a touchdown and a 10-0 Arkansas lead.

[Video not showing up above? Click here to watch » arkansasonline.com/930ksmart/]

The Razorbacks kept the Aggies off-stride with plays like Warren Thompson's 27-yard double-pass to Burks and went on to rack up a 304-yard first half against the nation's then-No. 9 defense.

Analysts and coaches across the SEC have taken note that Arkansas' rise is more than just a strong belief system under Pittman and veteran players who have embraced the staff. Their scheming and usage of personnel is on the cutting edge.

Smart said "everything" about Briles system is tough to handle.

"You have to defend the entire field, right?" Smart asked. "He does a good job. He's not limited to what he does. He does what the players do well. You've got a quarterback like KJ who creates issues and problems for defenses and then you've got good matchup guys, you've got speed at back."

Pittman said Briles was fearless with his play-calling.

"I mean everything he calls he thinks is going to work," Pittman said. "Everything. It's not a question in his mind. They're going to press Burks and KJ's going to throw a wonderful ball and he's going to out-run everybody. I mean there's not a question. It's kind of neat to be on the headsets and hear him talking about pre-snap: 'This is a touchdown.'"

"Coach Briles is awesome the way he dials things up," Morris said. "It might be the same play here, but something will be different about that play every time we run it. We have multiple different motions and stuff like that. ... He's confident we're going to make plays for him and execute his game plan."

Smith agreed, "He always finds a way to get the defense off balance with motion, movement, tempo, moving fast, getting the first first down. "So, I feel like Coach Briles is going to be ... himself. He's going to gather up a game plan and we're going to go out there and execute." 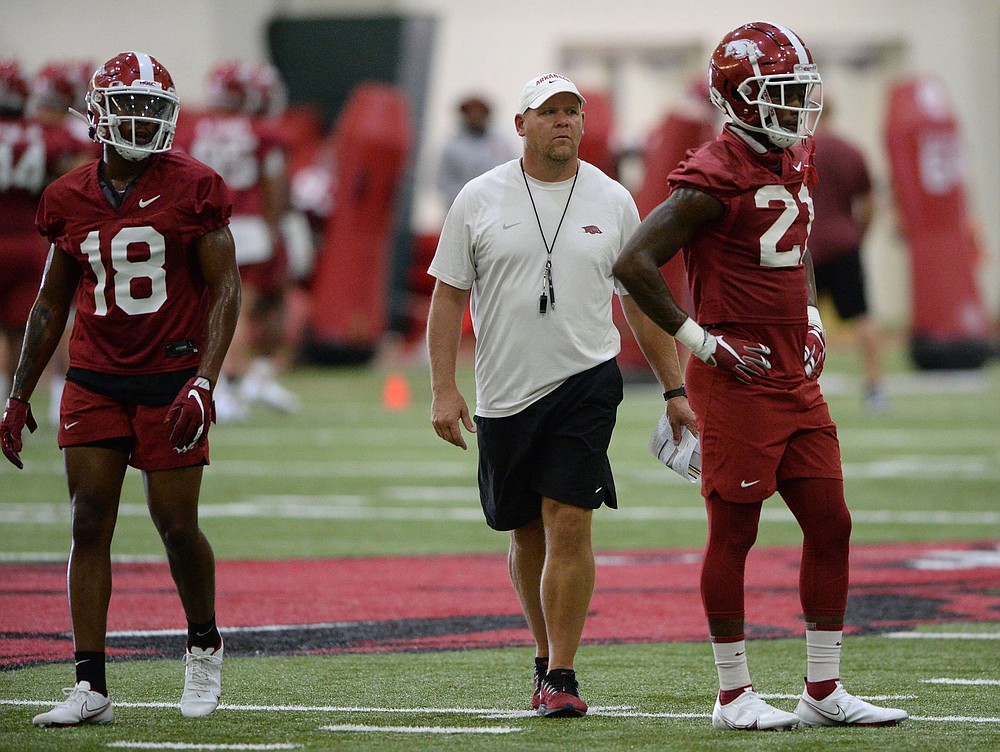 Barry Odom’s defenses are tough to prepare for, according to Georgia Coach Kirby Smart. “They’re an extremely tough prep because of the way they play. It’s just different,” Smart said. (NWA Democrat-Gazette/Andy Shupe)