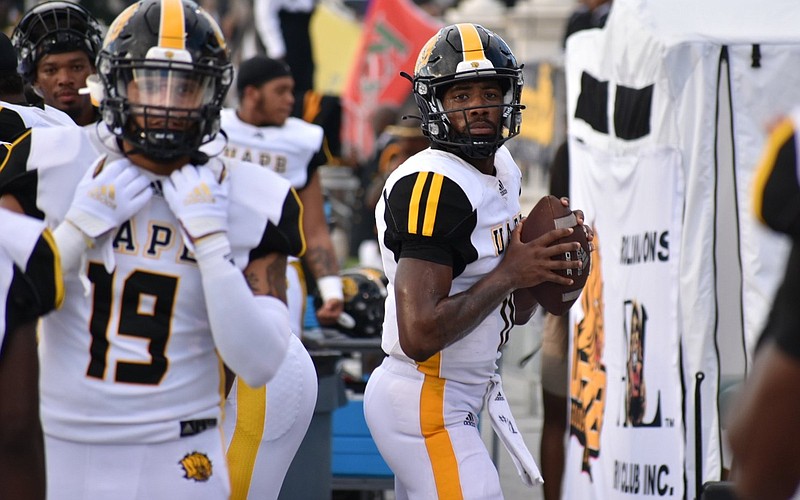 A 19-point lead with 5:32 left in the third quarter evaporated for an entire nation to see.

The University of Arkansas at Pine Bluff lost an opportunity to reestablish itself as a challenger in the Southwestern Athletic Conference, having won the Western Division last April. Alcorn State University, which did not play during the spring because of pandemic-related issues, sent a reminder it won the SWAC championship the last time the conference played football in the fall, which was 2019.

UAPB made matters worse in its 39-38 loss at home last Thursday in front of ESPNU cameras by fumbling the ball away four times, easily losing the turnover margin.

"We had a healthy dose of fumbleitis," Golden Lions Coach Doc Gamble said. "Especially when we were in position to score some more points, we gave it to the other team."

Tonight, the Golden Lions (1-2, 0-1 SWAC) get another chance to show they can contend for the conference championship, a prize they last won in the 2012 season.

To jump back in the West race, they'll have to beat Prairie View A&M University (3-1, 2-0 SWAC), a team UAPB held off 36-31 in April to secure a trip to the championship game.

Kickoff is 6:30 p.m. on ESPNU in the Lions' third of six games on ESPN network channels this season, a benefit of the conference's TV package and winning the West during the spring. So far, UAPB has yet to win on an ESPN channel, having also lost to nationally ranked University of Central Arkansas on streaming service ESPN+.

"They're 3-1 for a reason, so it'll be a good challenge Thursday night," Gamble said.

The Golden Lions have struggled in their pass defense this fall and rank last out of 12 SWAC teams in the category at 329 yards allowed per game. Prairie View quarterback Jawon Pass lives up to his name and ranks second in passing yardage at 274.8 per game, well behind Aqeel Glass' 355 for Alabama A&M University. Jailon Howard (70.3 yards per game) is Pass' top target.

Fourth-year Lions starter Skyler Perry, who's only been sacked once this season, averages 226 yards per game, but only has two touchdowns on 55-of-102 passing.

Still, Dooley is concerned with the Lions' ability to score points. They totaled 34 on Lane College and 23 on UCA.

"They score points, and anytime you face a team that can score points and has some similarities to you, it's always a challenge," Dooley said.

Unlike UAPB, where graduate transfer Kierre Crossley ranks sixth in rushing (59.3 per game), Prairie View does not have a rusher among the conference's top 10. Still, the Panthers go into tonight's game with a 432.5-391.7 advantage in total yards as the second- and third-best offenses in the conference square off.

"They're good and sound in all areas," Gamble said. "The head coach has a creative mind. They do some things. They've got a good quarterback in Pass. He's good and accurate. They will play you and scheme you well. Defensively, they're physical up front. There are some guys I recruited in the past."

TO WIN THE GAME

Gamble said the Lions must "stop being behind the chains," meaning they cannot afford to have to make up more than 10 yards to earn a first down often. They scored on each of their first three possessions but struggled to extend drives in the fourth quarter as Alcorn State stormed back.

The Lions' defense still finds its niche in intercepting passes, sharing the SWAC lead with Alabama A&M with four. Keeping Prairie View's Pass contained in the pocket is another point of emphasis Gamble made, noting the athletic ability of UCA's Breylin Smith and Alcorn State's Felix Harper in recent weeks.

"We've got to look at what we do best and do it really well," Gamble said. "We've played two dynamic quarterbacks the last two weeks, and it's not the dropback game. It's the scramble game. They're able to scramble, because we get after you, defensively. I know Prairie View has another good quarterback as well. If you look down the schedule, everybody's going to have a good quarterback."