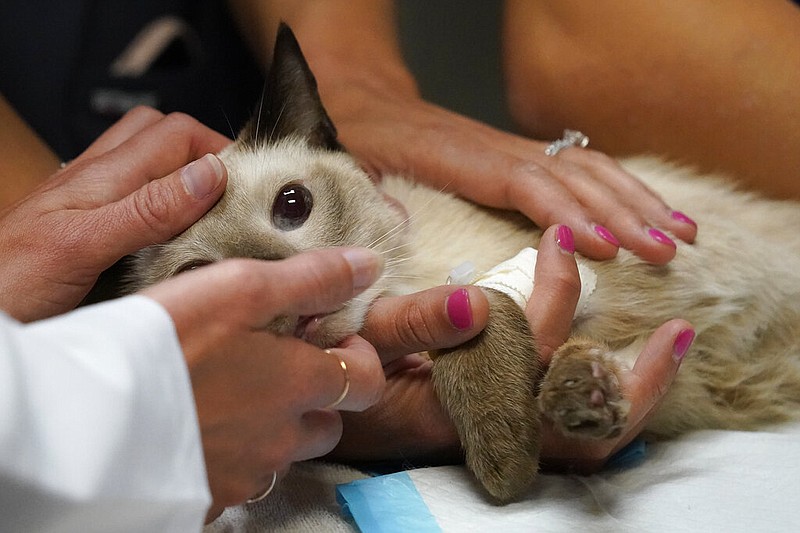 Student entrepreneurs representing the University of Arkansas, working on a device to diagnose a viral infection that plagues 32% of cats worldwide, won the top prize Thursday at the 2022 Arkansas Governor's Cup awards.

The GammaVet team, participating in the high-growth technology division, was awarded $25,000 in cash for their efforts to develop a clinical test for a novel virus affecting cats. The students have developed a prototype for a commercial diagnostic device that will "change the future of feline healthcare," said Shana Owens, chief executive officer of the company.

Owens told an audience at the Embassy Suites in Rogers that the potential market for the product is $1.8 billion in the U.S. alone. GammaVet's device uses a drop of blood and within 15 minutes can detect signs of the virus that leads to gastrointestinal lymphoma in cats, Owens said.

Today, there is no testing system in place. "There's no way for you or your vet to know if your cat is one of those at risk," she said.

GammaVet plans to use its prize money to support commercial development of its technology. "We're talking with a commercial manufacturer and some of our winnings will definitely go into transitioning our technology into manufacturing," Owens said after the ceremony.

Four students from John Brown University, working as the Ascend team, were awarded $15,000, the top prize in the small business division. They created a tree-stand system that promotes hunting safety.

Brady Collard said the company's tree stand can be marketed at $700 and production will cost only $200. The product will provide a new way to look at hunting, Collard said. "This industry is stale and lacking innovation," he added.

The next step for the company is to develop a product to demonstrate. "We're working on a functional prototype right now," he said.

This year's competition attracted 31 teams from 10 colleges across Arkansas, the largest group ever. Competition was narrowed to 12 finalists that were evaluated by 50 judges in Arkansas.

Participants included full- or part-time students seeking to test a real-world business idea or learn more about entrepreneurship and starting and developing a business. Student teams are faced with business challenges and must articulate and demonstrate strategies to address those issues and prove they have a profitable business.

Arkansas Capital Corp. of Little Rock again managed the competition, which the company has done every year since the event began in 2001. Dhu Thompson, former owner and chairman of Revolution Plastics of Little Rock, contributed the cash prizes.

The event, held for the first time in Northwest Arkansas, was hosted by Commerce Secretary Mike Preston and his wife, Anne. A complete list of finalists and runners-up is available at argovernorscup.org.