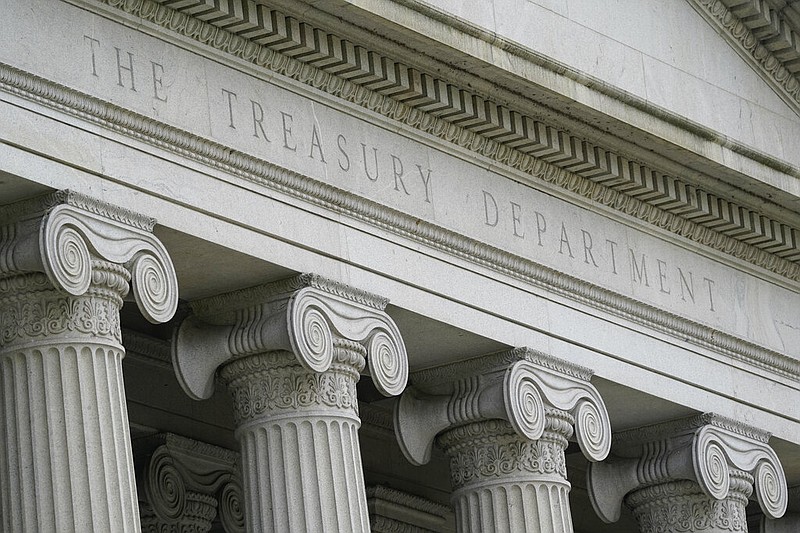 The U.S. Treasury Building is viewed in Washington in this May 4, 2021, file photo. (AP/Patrick Semansky)

U.S. Rep. French Hill, R-Ark., sponsored legislation this week that he hopes will stop the redistribution of millions of unspent federal dollars, aimed at helping tenants who are dealing with financial hardship due to covid-19, from rural to urban areas.

The U.S. Department of the Treasury's "clawback" of pandemic rent relief funds comes at the expense of renters in less populous areas, Hill said.

On Thursday, he introduced the Protecting Rural Renters Act, which would require the Treasury Department to stop taking back federal rent relief funds that would help rural tenants -- funds distributed by state governments rather than counties or cities -- and return the funds it has already taken back, including nearly $9 million from Arkansas.

The involuntary retraction of funds, announced in January, is an "attack on families in rural America by the Biden administration," Hill said Friday on the House floor.

The Treasury Department plans to give the unspent funds to California, Illinois, New York and New Jersey, where the demand for rent relief is highest. Hill noted in his floor speech that these "blue states" have already distributed millions of rent relief funds.

"This reallocation of funds will disproportionately affect rural America," Hill said. "[This] is unfair and turns a blind eye to the needs of renters who have not received rental assistance simply because they live in rural areas of our country."

He said in a Friday interview that cities and counties "typically have more infrastructure" to distribute financial relief than state governments do.

As of Thursday, renters in the remaining 73 counties have received $92.5 million of what was initially $173 million granted to the Department of Human Services, agency spokesman Gavin Lesnick said.

The federal Consolidated Appropriations Act distributed $46.5 billion in rent relief funds in early 2021. The Treasury Department announced Thursday that 4.7 million payments had been made and $30 billion had been spent or obligated by the end of February.

Cities and counties with more than 200,000 people received their own pots of money from the Consolidated Appropriations Act, while state governments were responsible for distributing funds to all other areas.

Benton and Washington counties still run their own rental assistance programs. They had already distributed a cumulative $27 million before turning to the recent $23 million reallocation.

The state started accepting rental assistance applications from Pulaski County in November 2021 when the county's program, which started with $11.7 million, was running low on funds.

Hill told the Arkansas Democrat-Gazette in February that the federal government should have given states the freedom to measure their individual needs while distributing rent relief.

He said Friday that he has not spoken with the Treasury Department or the Biden administration recently, but he is not the only member of Congress to have expressed concerns about their handling of rent relief.

"I think they have not handled this entire project particularly well," Hill said. "This is just the latest misstep."

No other members of the House are sponsoring the Protecting Rural Renters Act. Hill said he asked U.S. Rep. Emanuel Cleaver, D-Mo., to co-sponsor the bill, but Cleaver declined.

Even so, Hill said he hopes the Protecting Rural Renters Act will receive bipartisan support.

"Many members on the other side of the aisle have been extremely irritated by this policy, so we're going to reach out to all the offices on both sides of the aisle and see if we can get bipartisan support for [the bill]," he said.

Cleaver told Politico in December that rural communities have "acute housing problems that frankly are oftentimes overlooked because the attention is on big-city housing issues."

Pandemic rent relief covers past-due rent back to April 1, 2020. It also can cover missed utility payments and up to three months of future rent.

Lesnick said the Department of Human Services will "closely monitor" the Protecting Rural Renters Act as it moves through Congress.

"If any rental assistance funds are returned, we will analyze where the need is greatest and work to determine the best way to allocate that money," he said. "Like many states, the rate at which we distributed funds increased as our program continued."

The department has made adjustments to its rent relief program at the urging of Congress, state legislators and renters' advocates.

The program initially required landlords to submit matching applications for each tenant, and some landlords refused to participate. The Department of Human Services loosened this requirement in September after pressure from Congress.

In January, the department paused its acceptance of rent relief applications to "ensure we don't take in more eligible applications than we can fund," department spokeswoman Amy Webb said at the time. The department enacted the pause when it altered the distribution process so checks would be issued to both the tenant and the landlord as a fraud prevention measure, at the recommendation of some state legislators.

"We will process the applications submitted before noon today, and we will work to determine next steps depending on whether any funds remain after those are processed," he said.