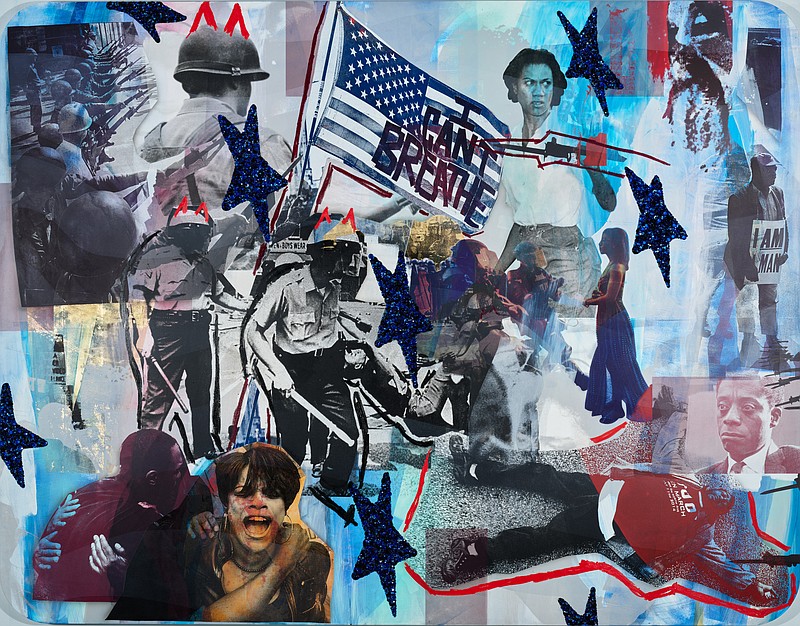 Security officer Ricardo Castro spends most days on his feet at the Baltimore Museum of Art, where he answers a lot of questions:

"Is this the way to the Matisses?"

"Where are the restrooms?"

"What's the best thing to see in the museum with my kids in 15 minutes?"

"If you're a guard, you hear it all," said Castro, who has worked for the museum's security team for three years. "I enjoy the interaction — especially when you can tell that people are really moved by something hanging on the wall."

Now Castro is answering questions of a different kind: An exhibit he curated with 16 other guards opened at the museum on March 27. In an interview prior to the opening, he said he imagines that people will probably want to know how they came up with the pieces they chose for the exposition, "Guarding the Art."

Castro's selections, three objects by unidentified artists from Indigenous cultures, reflect his desire to see more works in the museum that spotlight early cultures, including his own Puerto Rican ancestry, he said.

"I'm excited to see everyone's reaction to what I picked for the show," said Castro, 35.

The idea to have security guards take a turn at selecting pieces for an exhibition came about in February 2020 when Baltimore Museum of Art trustee Amy Elias went to dinner with the museum's chief curator, Asma Naeem.

"We were talking about ways to engage with the security guards, who spend more time with the art than anyone, and Asma mentioned the possibility of doing a mentorship," Elias said. "I thought, 'Wouldn't it be interesting to hear from the guards about which pieces of art were the most meaningful to them?'"

Later that night, Elias said, she roughed out a concept for an exhibit, which she and Naeem presented to museum Director Christopher Bedford. "I told him, 'I'm not leaving the office until you say yes,' and he fortunately really liked the idea," Elias said.

She and Naeem said they thought about the possibilities for a while, then put out a memo last year to the museum's 45 security guards: Would any of them be interested in developing an exhibition based on their personal selections from the museum's vast collection? They would be paid for their time as guest curators in addition to their regular hourly wage.

"For the past few years, the Baltimore Museum of Art has tried to bring in new voices that haven't been heard before," Naeem said.

"Our guards are always looking at the art and listening to people as they talk about the art. People enjoy talking to them, and their education is really a 'hands on' gallery experience. We wanted to see things from their perspective.

"Having them curate an exhibit is more than just a clever idea — it's a reflection of our commitment to bring more people through our doors," Naeem added.

The 17 guards who signed up attended Zoom meetings for a year to learn how to put on an exhibition, from framing artworks and writing description labels for the public to making sure that each piece has correct lighting, Naaem said.

"We asked them each to select up to three objects, and they then did a deep dive with our librarian to research each one."

With more than 95,000 works at the BMA to choose from (about 1,800 are on display at a time), selecting only a handful was the most difficult aspect of the project for some of the guards, Elias said.

"There are certainly pieces of art that haven't been seen in decades," she said. "That's part of what makes all of this so fascinating."

Several guards chose social justice and change as a theme for their selections, she added, while others chose pieces to match their experiences of rotating each day between the museum's galleries.

Sara Ruark chose two works, including Karel Appel's "A World in Darkness" (1962), because she wanted to convey the current uncertainty in the world, she said.

"I like surrealism, and I was drawn to Appel's use of darker colors compared to the brighter colors of his previous works," said Ruark, 32.

"These are disconcerting times, and this painting actually contrasts with what we are seeing now between Ukraine and Russia," Ruark added. "There are people pushing for positive change, but somehow we just keep winding back in time."

Alex Dicken, a security guard for two years who recently moved to the museum's visitor services team, said he chose Max Ernst's "Earthquake, Late Afternoon" (1948), because he was struck by how the painting appears serene and detached from the crisis it depicts.

Dicken has a philosophy degree and has always been interested in surrealism and minimalism, he said. "When I was in kindergarten, I remember coming to the Baltimore Museum of Art on a field trip, but I was more interested in the sculpture garden then," he said.

He said he never imagined that he would one day suit up as a guard and answer questions from the public at the same museum. "Working as a security officer involves so much more than just standing in a gallery," said Dicken, 24. "When you have repeated exposure to the artwork, you learn a lot about it. I hope I was able to pass that along to the people who visit."

"When I first came here as a guard, I thought it would just be something to do to pay my bills," he said. "But I really came to love it, especially when I'd see how joyful people were when they looked at the art."

He said that even before he began curating the exhibit, people would ask him about the art.

"Now when somebody asks me what I think about a painting or a sculpture and asks me to explain it, that's my favorite part of the job," Castro added.

"Guarding the Art" will be on exhibit at the Baltimore Museum of Art through July 10.