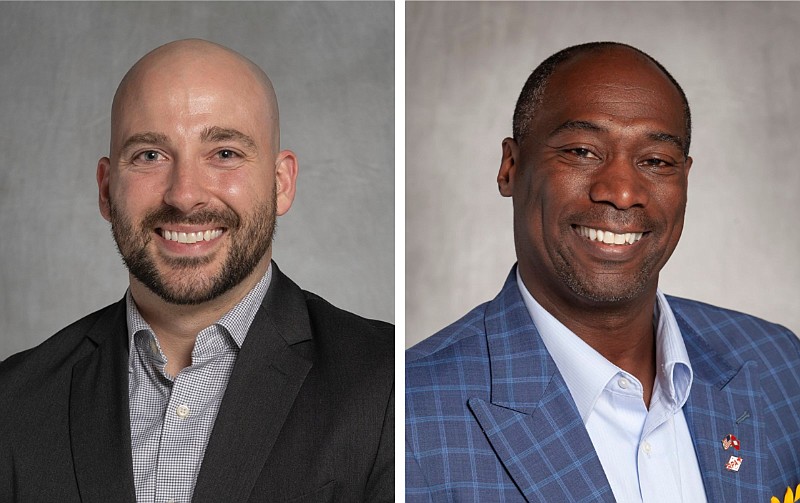 Brandon Achor (left) and Wes Booker, both Republicans, are shown in this undated combination photo. The two are vying for the open seat representing Arkansas House District 71, which covers portions of Maumelle and Pulaski County.

Two conservative Republicans, Brandon Achor and Wes Booker, will vie to represent an open House seat that covers portions of Maumelle and Pulaski County in the primary election next month.

All 100 House districts were redrawn last year based on population data from the 2020 U.S. census. House District 71 covers much of the same area Rep. Mark Lowery, R-Maumelle, currently represents, but Lowery's address was drawn into an adjacent district and he is running for state treasurer.

The seat represents most of the city of Maumelle as well as the Marche and Blue Hill areas to the east. The district is bordered to the south by the Arkansas River and Crystal Hill Road.

Both men describe themselves as conservative Republicans and are first-time candidates for political office.

Booker, 50, was born and raised in White Hall and is a graduate of White Hall High School. He earned a bachelor's in business administration from the University of Central Arkansas, which he attended on a football scholarship. He moved back to White Hall after college and has lived in Maumelle for about three years.

He owns an insurance agency and contracts as an SEC college football official. He has three children, two of whom are in college and a 13-year-old, as well as one grandchild.

Booker said he has worked with legislators across the country in his career in the life insurance and financial services industry and found that Arkansas lawmakers "really do care about the people of Arkansas" and that he wanted to be the voice of his community.

Asked why people should vote for him, Booker said his experience makes him the "candidate of choice."

"I have an empathetic ear," he said. "I know that I can handle the pressure with great dignity and be able to be that voice for this district."

Achor, 33, grew up in Maumelle and attended Baptist Prep High School in Little Rock. He graduated from the University of Arkansas, Fayetteville and earned a Doctor of Pharmacy degree from the University of Arkansas for Medical Sciences. He and his wife, Kaley, have a 1-year-old daughter. The couple own Achor Family Pharmacy in Maumelle as well as several independent community pharmacies throughout central and eastern Arkansas.

Achor said he saw the trust people put in their local pharmacy during the ongoing coronavirus pandemic and said he believes he has a level of access and accountability with the community that politicians often do not.

"I saw this level of trust really imparted on us, and me and my wife said, what's the next way to care for our community?" he said.

Achor said if voters value someone with more than 30 years in the community whose family is invested in serving them with their small business, he is the only candidate in the race who can provide that.

Both candidates said they are in favor of reducing the state income tax or eliminating it entirely.

Booker said his top priority as a legislator would be helping constituents amid "staggering inflation." He said he supports eliminating the state income tax.

"With the surplus we have I think it should be eliminated," he said.

Booker also said he would postpone taxes on nonessential goods for two years to make sure families are able to pay their bills.

Achor said he is in favor of reducing or eliminating the state income tax, which he said is about empowering the taxpayer and competing regionally.

He said he will "always default to empowering the taxpayer" but would have to research the issue more.

Achor said school choice would be his No. 1 priority as the House District 71 representative. He supports voucher programs wherein the state allows tax dollars to be used for private school tuition, describing them as "a very streamlined and simple way to tackle an issue."

He said the fact that the district is home to the largest charter school in the state, Maumelle Charter High School, means the community supports school choice.

"Lawmakers need to empower taxpayers as the primary authoritator of their education dollars," Achor said.

He added that public schools should have the upper hand since they receive state funding.

"They should rise to this occasion to really own their obligation, to really perform and compete," he said.

Booker said in an interview that he feels parents have the right to put their child in an environment where the child can thrive and that he supports anything that will help a child achieve a greater education.

Both men referenced their Christian beliefs when asked about their stance on abortion.

"I feel that Jeremiah 1:5 is pretty clear: 'I knew you before I formed you in your mother's womb,'" Booker said.

Booker said doesn't support any exceptions, but added that the decision is "between them and God."

"I mean, it's not for me to say what another person does," he said. "I do fight for the unborn."

Achor said his views come from being a Christian who studied human anatomy and science.

He said he believes the state is required to "honor and protect the life of the unborn," but said it would be very difficult to have a total abortion ban without very specific exemptions and that he would have to do a lot more research.

He said lawmakers should listen to unbiased medical practitioners as well as ministries of faith when considering abortion legislation. He added that the state also should optimize its foster care system and adoption program.

Asked about the state's Medicaid expansion program that provides health insurance coverage to more than 300,000 low-income Arkansans, Achor said people should not make assumptions about the program and that he doesn't think people who are choosing between paying a light bill and paying for insulin are abusing the system.

"I believe there should be clearer metrics and evidence-based spending, but if the need is present the need should be met," he said.

Booker said he needed to look into the program more.

In his latest campaign finance report filing with the state, Booker said he had raised a total of $20,500 and spent $6,750 since launching his campaign in January.

Achor reported raising $33,205 in contributions and spending $9,219.37. He announced his bid for the seat in December.

The winner of the May 24 Republican primary will face Democrat John J. Pack and Libertarian Aaron Robert Raatz in the general election.