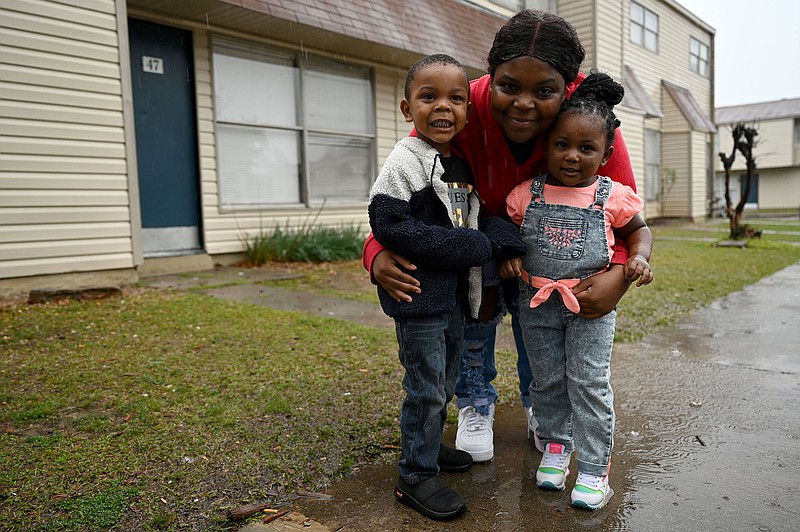 WASHINGTON -- Jasmine James didn't use her federal child-tax-credit money on the extravagant. Instead, the 22-year-old Jacksonville mother leaned on the monthly checks to help with the basics of life: her car insurance payment, electricity bills and food for her young children.

Now, with the monthly payments expired, she's pushing ahead with $600 less every month. To cope, James said she's taken out two private loans through payday lenders to subsidize her bills. "If they bring it back, it will help a lot more people because bills are going up. Light bills are going up. Rent is sure going up. Gas going up," said James, a mother of a 2-year-old daughter and a 3-year-old son.

James' household is one of the tens of thousands of Arkansas families that received their last monthly payments in December.

The monthly child-tax-credit payments, which gave parents up to $300 per child on a monthly basis, expired after Senate Republicans opposed President Joe Biden's wide-ranging social and environmental legislative package, also known as the "Build Back Better" package.

After it passed in the House, Senate Democrats, facing public opposition from fellow Democratic U.S. Sen. Joe Manchin in late December, were not able to gather enough support to push the package through the chamber.

In Arkansas, supporters of the monthly payments describe its expiration as a blow to families across the state. They say the money combated child poverty and gave families financial breathing room as they navigated the coronavirus pandemic.

Arkansas is home to the sixth highest poverty rate among the 50 states, and it holds wide disparities in the median incomes of Black and white households.

The state's median household income is $49,475, a figure that's well below the national average of $64,994, according to five-year estimates from the U.S. Census Bureau.

There are wide racial disparities in Arkansas' household income levels.

Kymara Seals, policy director for the Arkansas Public Policy Panel, described the payments as a "life preserver" for families. The policy panel is a nonprofit that advocates on social and economic justice issues.

Families nationwide continue to face high consumer prices as well, including elevated costs when it comes to food, electricity and gasoline.

"When you have more money chasing fewer goods, you inherently have more inflation," said U.S. Sen. Tom Cotton. "We cautioned the Democrats about this at the time, and it wasn't just Republicans cautioning the Democrats."

Cotton, an Arkansas Republican who opposes bringing back the monthly payments, said the payments contributed to inflation by adding more money into the economy at a time when supply was constrained. Nationwide, families received about $92 billion through the monthly payments, according to Treasury Department figures.

But Bruno Showers, senior policy analyst at Arkansas Advocates for Children and Families, said the child-tax-credit expenditure alone is not big enough to drive inflation.

The organization, which advocates on issues affecting children and families, was supportive of the monthly payments.

"It's a meaningful amount of money for these individual families that are receiving it," he said. "It helps them pay for the necessities of life. But as a share of our national economy, it's really small."

The Center on Poverty and Social Policy at Columbia University credited the expanded child tax credit with keeping 3.8 million children out of poverty in November. The center reported that the monthly child poverty rate jumped from 12.1% in December to 17% in January, the month families stopped receiving the direct payments.

The center bases its figures on the supplemental poverty measure framework that factors in non-cash government assistance. The Census Bureau started publishing the measure in 2011. It takes into account other "government programs designed to assist low-income families and individuals that are not included in the official poverty measure," according to the Census Bureau website.

U.S. Rep. Rick Crawford said the child-tax-credit payments were indiscriminate and not every family needed the money.

"Really I think we're past the need for it, so I don't really think that we need to be bringing that back," said the Jonesboro Republican.

Crawford said there are labor shortage issues in his district and employers have called wondering how they can get people to come back to work.

"We got an issue at home, quite frankly, and across the country, where people are not at work and could be," he said.

That's not the reality for James, the mother of two in Jacksonville.

James works four 10-hour shifts a week as line worker and loader at an Amazon warehouse. Her work doesn't offer additional shifts this time of year, she said. And even so, working more hours would mean missing quality time with her young children, she said.

In general, there are people who are working in jobs but not making enough money, she said.

"Working a minimum wage job, you can barely pay the rent," she said.

There are parents who are also dealing with the effects of long covid and are not able to work or are limited in their ability to work, said Donna Massey, the state chairwoman of the Arkansas Community Organizations, a group that advocates for low-income families.

"Few and far between are the people who actually fritter the money away on unnecessary things," she said.

When parents are worried about paying the rent or feeding their families, they are not in a good position to take larger steps forward like going back to college or starting a small business, she said. The monthly payments, she said, gave families a sense of stability.

U.S. Rep. Bruce Westerman, a Republican, said he's not in support of the monthly child-tax-credit payments.

"Under the 'Build Back Broke' agenda, Democrats are trying to reimagine the program into a welfare-without-work scheme," said Republican U.S. Rep. Steve Womack in a statement, referring to the social and environmental legislative package backed by Democrats.

U.S. Rep French Hill, in a statement, said inflation is going after household budgets and wage growth. He blamed the high consumer prices on "tax-and-spend policies" from Democrats.

"The best way to alleviate poverty isn't through further government handouts, but through meaningful reforms to combat inflation," he said, also pointing to easing the "tax burden" on small businesses.

When asked if he would be supportive of bringing back the monthly payments that were happening last year, U.S. Sen. John Boozman said he's "supportive of looking at the program in its entirety and trying to work out some sort of compromise."

The monthly child-tax-credit payments were done in an emergency situation to get the nation through covid, he said. But the covid landscape has shifted and the U.S. is now facing "rampant inflation," the Republican lawmaker said.

"The question is what do you do now?" he said. "Now we're in a different situation."