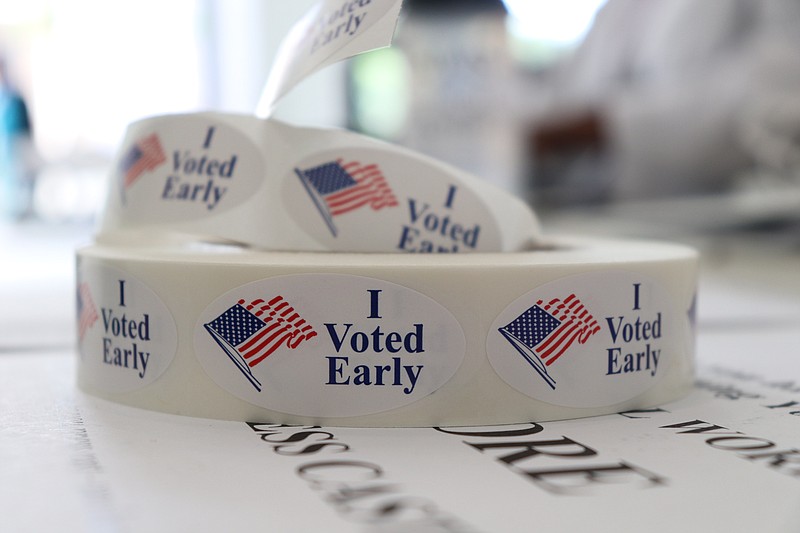 In this May 21, 2018, photo, a roll of stickers awaiting distribution to early voters sits on a table at the check-in station at the Pulaski County Courthouse Annex in Little Rock, Ark. Voters in four states are casting ballots Tuesday as the 2018 midterm elections take shape. Primaries are set in Arkansas, Georgia and Kentucky while voters in Texas settle several primary runoffs from their first round of voting in March. (AP Photo/Kelly P. Kissel)

The Arkansas General Assembly approved four voting laws in 2021 that have been at the center of a lawsuit filed by voters and voting rights groups. A lower court overturned the laws, but the state Supreme Court has now reinstated them, just in time for the state’s primary.

Back up: what do the laws say?

There are four laws at issue.

What did the lawsuit say?

The groups say supporters of the new laws cannot point to any significant election-administration problems that would justify the changes enacted.

What did the lower court say?

He also noted that the defendants in the case had failed to produce evidence of the sort of voter fraud or voter intimidation the backers of the new laws said they needed to prevent. He enacted an injunction to prevent the laws from going into effect.

What did the Supreme Court say?

After losing at the circuit level, the state appealed the ruling to the higher court and asked for the laws to be temporarily reinstated while the case continues because the changing rules could cause "electoral chaos and confusion" during the primary, which is on May 24.

The Supreme Court granted the request to reinstate the laws, but the order did not explain the court’s reasoning. However, the ruling is temporary, only in place until the court can evaluate the case.

The court also approved the state’s request for expedited consideration of the case, but no timeline has been set.

Read more about the Supreme Court’s decision and the lawsuit from reporter Dale Ellis, and sign up for our Voter Guide email to stay tuned in to all things related to the primary.